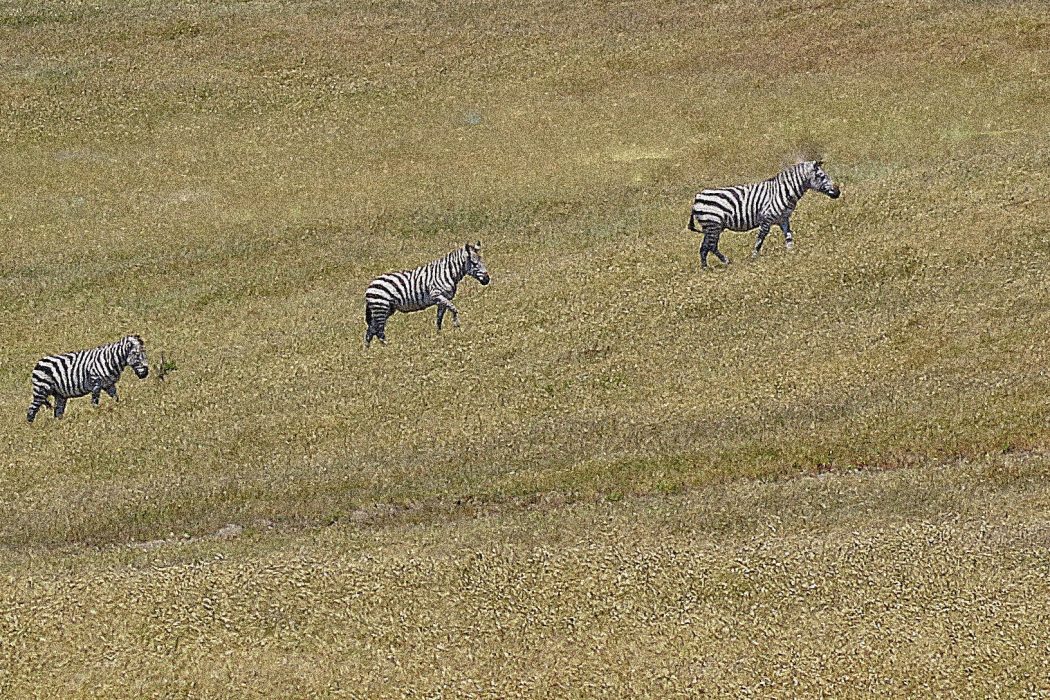 The sapphire sea crashes white waves over a dark and rocky shore line. A stiff breeze blows across a grassy hillside. Your eyes wander up over the oak studded hills into the blue sky. Below your gaze traces a secluded valley where a herd of Zebras are gathered with some Black Angus cattle…  Wait a minute, a herd of Zebras?!  No, your eyes are not deceiving you, the striking black and white cousins of the horse are flourishing here on the Central Coast.

How Did Zebras Get to the Central Coast?

We can thank William Randolph Hearst, the developer of the iconic Hearst Castle in San Simeon, for bringing the native African Zebras to the Central Coast. Hearst was an animal lover, and he felt a zoo would entertain his guests. “In a letter to his architect Julia Morgan, Hearst stated that he wanted his guests to feel as though they were driving through an area populated by interesting and exotic animals in their natural state, not a zoo.” (1)

The current herd of over 100 head of wild Zebra are direct descendants of Heart’s original zoo, which was dismantled in 1937.  The Zebra herd was allowed to stay, and they have simply flourished grazing the hillsides at the base of Hearst Castle near the town of San Simeon.

Where Can One See the Central Coast Zebras?

Once-in-awhile, the Zebras are visible as you drive along Highway 1 near the town of San Simeon. However, you can park along the roadside just south of town, wander up the berm and glance over the fence to take a more opportunistic gander. You will probably see some, if not most, of the secret band of black and white stripes if you are patient. They cohabitate with a herd of Angus cattle on the Hearst Ranch and other private lands, and seem to have found a comfortable place in this slightly strange social group. 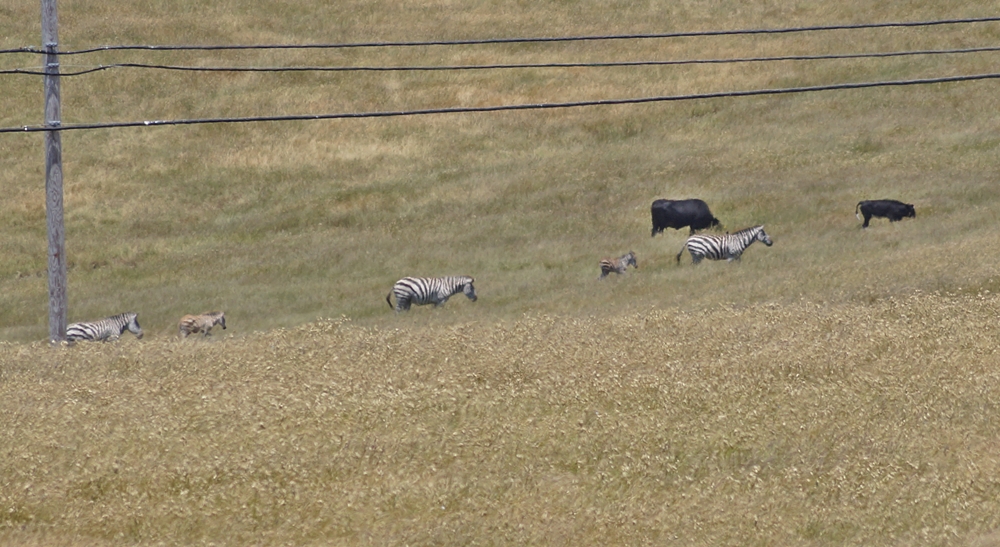 Stay and gaze for a while, as the Zebras spend their days interacting with each other – kicking, biting and pushing – while meandering and grazing with little ones frolicking alongside.  You never know exactly what kind of mischief you’re going to encounter when you head out in search of the somewhat secret Central Coast Zebra, so don’t forget binoculars and your camera with a long-range lens!

Why Don’t We Ride Zebras?

They look a lot like horses, so it stands to reason that we could ride Zebras like horses, right?  Not so fast…  The stripes certainly make a striking picture that would be fun to have out on the trail, or in a show ring (or even on a racetrack if you’re familiar with the movie “Racing Stripes”), but the simple answer to the question of why we don’t ride Zebras is domestication.

Zebras have not been domesticated, and its true of this Central Coast band as well. The Zebra, by nature, is much more aggressive and uncooperative than its familiar horse cousin, and has a more pronounced fight or flight instinct – think of the difference between a “wolf” and your dog chasing butterflies in your backyard.  Zebras don’t care about “the herd” the way a horse does, so they don’t naturally look to humans as their herd leader.  Physically, the Zebra is just different enough from a horse – with his short, compact stature – that he isn’t as suitable to carry a mount.  This is not to say that there haven’t been cases where Zebras have been “broke to ride”, but most attempts fail.

So, our interaction with the wild and exotic Central Coast Zebras will have to be from a far, appreciating their unique designs, watching hooves and teeth fly with no mind to their herd mates and enjoying the delight of a young foal frolic about.  It’s not often that we get to see such exotic animals in a “free” and “uncaged” way.

Plan a coastal day trip along Highway 1, and include a stop along the East side of the road on the South side of San Simeon.  Enjoy the antics of the wild and exotic Central Coast Zebra population. It’s just one more reason why life on the Central Coast is simply beautiful.

(1) The Zoo At Hearst Castle

Former Pony Clubber, Eventer and Dressage rider who balanced training and showing with getting a college degree (from Cal Poly SLO), becoming a wife and raising a family. Presently she is enjoying riding a Rocky Mounted Gaited horse and exploring Mounted Archery. Her new baby is Whisper, a Connemara filly.