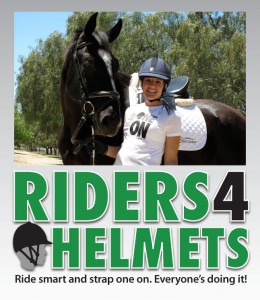 Building on that success, Riders4Helmets expanded the event globally in 2011. Riders4Helmets International Helmet Awareness Day 2011 received support from 10 helmet manufacturers and more than 500 equestrian retailers in the USA, Canada, Australia and the United Kingdom.

Riders4Helmets aims to grow the global growth of this years’ event by attracting equestrian retailers from European countries outside of the U.K., as well as equestrian retailers in New Zealand. This year Riders4Helmets will have printed educational materials available to both participating retailers and equestrians who wish to educate others on helmet use. Helmet manufacturers and retailers who are interested in participating in the event may email admin@riders4helmets.com to express their interest and will then be directed to a retailer registration page.

Riders4Helmets will host a series of live educational webinars on Riders4Helmets.com during the 2012 Riders4Helmets International Helmet Awareness Day. The webinars will feature a variety of experts in: Traumatic Brain Injury and Concussion; Psychologists; Neuro Physiotherapists; Helmet Manufacturers (tips on correctly fitting a helmet); Traumatic Brain Injury Survivors; Leading Equestrians etc. Viewers will be able to ask “real-time” questions to these experts. Details of who the experts will be, along with the topics that they will discuss, will be available nearer the date.

How can you help?

The more you write, blog, post, tweet and, in general, share the details of International Helmet Awareness Day with equestrians in the build up to the event … the more people will have an opportunity to get educated on the benefits of wearing a helmet. Your sharing information on the event with others might just save a life.

Logos, photographs and quotes for Riders4Helmets International Helmet Awareness Day 2012 may be obtained by emailing chad@riders4helmets.com.

How will equestrians know which retailers are participating?

From May 20th, 2012 a list of participating retailers sorted by country (and state) will be available to equestrians exclusively on Riders4Helmets.com. Equestrians are encouraged to visit the Riders4Helmets website on a regular basis for updates with regard to the event.

For advertising and sponsorship opportunities related to International Helmet Awareness Day 2012 please email chad@riders4helmets.com. Examples of opportunities include banner advertising on the Riders4Helmets website and company/product logo on print literature to be distributed to equestrians clubs/organizations (no logo’s will be placed on retailer literature unless non-conflicting). Riders4Helmets is entirely self-funded and any support is greatly appreciated to allow the campaign to continue to host Safety Symposiums and grow globally.

How can equestrians get involved?

If a club or organization is interested in hosting their own event to celebrate the day, they may email admin@riders4helmets.com. We can send interested parties a list of literature and promotional materials (such as education CD’s) that will be available for purchase at a small charge (to cover our costs). We will be happy to help promote any event by posting details of it on the Riders4Helmets.com and on our Facebook and Twitter pages. Equestrians are encouraged to take lots of photos of their event and write up a short description of what they did, and who participated. This will then be included as a feature article on the Riders4Helmets campaign website.

Riders4Helmets was founded in early 2010 after Olympic dressage rider Courtney King-Dye was seriously injured in a riding accident. King-Dye, who remained in a coma for a month following her accident, was not wearing a helmet at the time of the accident and continues to undergo rehabilitation. The goal of the Riders4Helmets Campaign is to educate equestrians on the benefits of wearing a properly fitted and secured, certified helmet. For more information on the Riders4Helmets campaign, visit riders4helmets.com. You can also follow the campaign at www.facebook.com/riders4helmets and http://twitter.com/riders4helmets.

Written By
slohorse
More from slohorse
Doing some fall maintenance on your horse trailer can be one...
Read More