Arabian lovers have come to expect certain qualities from the breed.  They look for the large, expressive eyes, the chiseled bone structure, and the sharply dished face, but it is that little something extra that makes for a horse that truly stands out in the crowd.  Among the thousands of horses born each year, rarely does one exhibit something that sets them apart, not only in the eyes of the breeder, but also the industry in general.  Desperado V had that “it factor”.

Sired by the legendary Huckleberry Bey+++ and a beautiful *Bask++ bred mare by the name of Daraska, Desperado was not a champion of coincidence.  Shelia Varian was nothing if not dedicated to her own vision of what the Arabian horse could and should be.  She had a unique ability to look at a horse and decide what qualities that horse would pass on to his or her offspring.  Desperado V marked the 4th generation of Varian stallions; his sire, grandsire and great grandsire were all part of a notable breeding program that began at a little ranch in Arroyo Grande, CA in 1959.  When that beautiful and exotic black bay colt hit the ground in February of 1986, everyone was enchanted, and it was obvious that a future champion had just taken his first breath.

Dispostition Valued As Much As Beauty

Varian bred horses have always been prized for their dispositions as much as their beauty.  In fact, Shelia Varian was quoted as saying “I’ve weeded out horses for lack of good temperament.”  For Shelia, temperament did not just mean being a kind horse that would not attack you in his stall, rather it meant that the horse was trainable, easy to work with, pleasurable to be around and retained the information that was taught to him no matter the situation.  A halter stallion must be able to turn on and off his “spirit” while in the show ring; A horse that is all fire as he enters the ring, but loses it after standing in line and waiting for 30 other stallions ahead of him to “show” won’t be a winner, and conversely, a stallion who is biting, bucking, kicking or flying off the handle while standing in line is going to make the wrong impression on a judge.  Showing a stallion in Halter is much more difficult than anyone who hasn’t done it realizes, and this is due to horses like Desperado V, who make it look easy.

Desperado V, like four other Varian bred stallions, is an Arabian Horse World Sire of Significance.  Since he began breeding at the age of 2, he has sired more than 900 foals, the majority of which have gone on to either win in the show ring, or to produce winners themselves.  Desperado V offspring have gone on to win at the Regional and National Level in everything from Western Pleasure to Reining and Hunter Pleasure to Country English Pleasure.  Additionally, many Desperado offspring have gone on to careers that do not include the show ring, but rather navigating treacherous mountain trails, chasing cattle across an open range, and even working in the branding pen.  Indeed, Desperado had demonstrated that his best quality as a sire is his ability to produce amazingly versatile offspring, while still maintaining that signature temperament and trainability.

Wisdom in His Eyes

I had the pleasure of meeting Desperado V several years ago.  A friend had decided to have her mare bred to another one of Shelia Varian’s beautiful stallions, Bel Aire V, and I admit that I had ulterior motives in accompanying her to the ranch that day.  After walking through the pristine barns, speaking with the staff and doing some paperwork, we were on our way out of the office, and there was Desperado V simply…being a horse in a small, green pasture.  And what a horse that he was.  Despite his age, Desperado was still one of the most beautiful animals that I had ever seen.  There was a wisdom in his eyes that was undeniable, and in watching him, I was reminded of the reason that I fell in love with the Arabian at only 8 years of age. ..And isn’t that what it’s all about?

On January 13, 2014, Desperado V took his last breath.  It was a sad day for Varian Arabians, and for the entire Arabian Horse Industry.  The outpouring of condolences and support was incredible.  Even though this dark horse has walked into the light of his final sunset, his legend will live on forever through his many offspring and the impact that he has made on the Arabian breed. 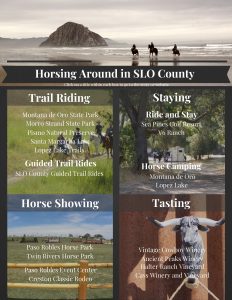 There are so many ways to horse around in stunning SLO County. To keep this info at your fingertips we have developed a FREE Hot Sheet that will direct you to stories which tell you where you can trail ride, stay with your horse, show and taste. We’ll continue to add horsing around stories to our website. You can stay up-to-date by becoming a SLO Horse News herd member. Get your Horsing Around in SLO County Hot Sheet here >.