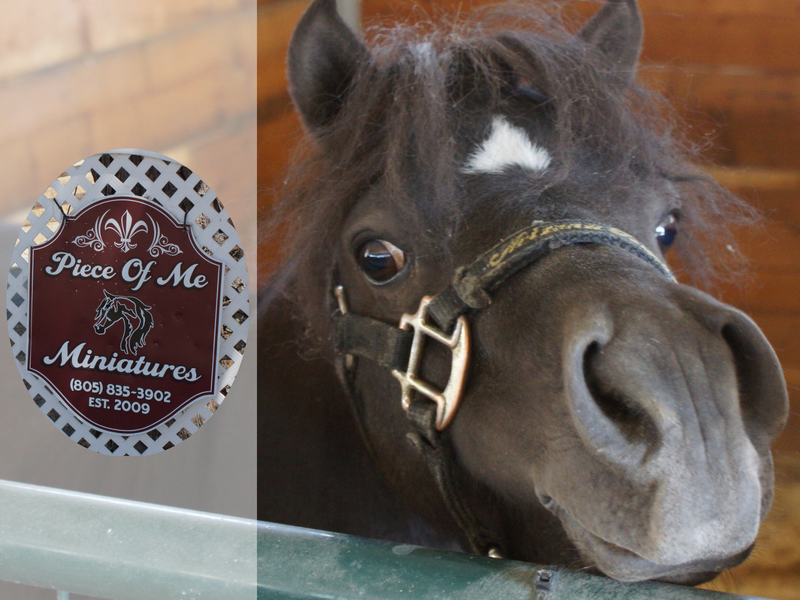 “I traded a reining cow horse for five minis, that’s how I got started!” expressed Bryce Baker of Piece of Me Miniature Horses located in Paso Robles, California. That swap certainly changed not only Bryce’s horse industry path but it has changed the miniature horse world as well. It took him from his riding Quarter Horses beginnings into a whole new horse world of miniature horses.

Bryce and Piece of Me Miniature Horses 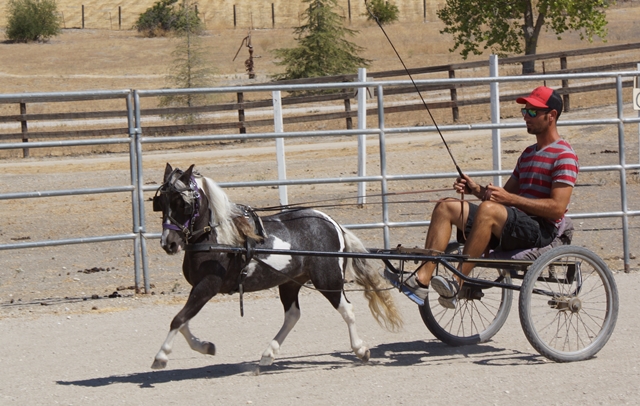 Bryce Baker has become a staple at the Miniature Horse World Championships where miniatures he has trained keep performing at the top level in the world. 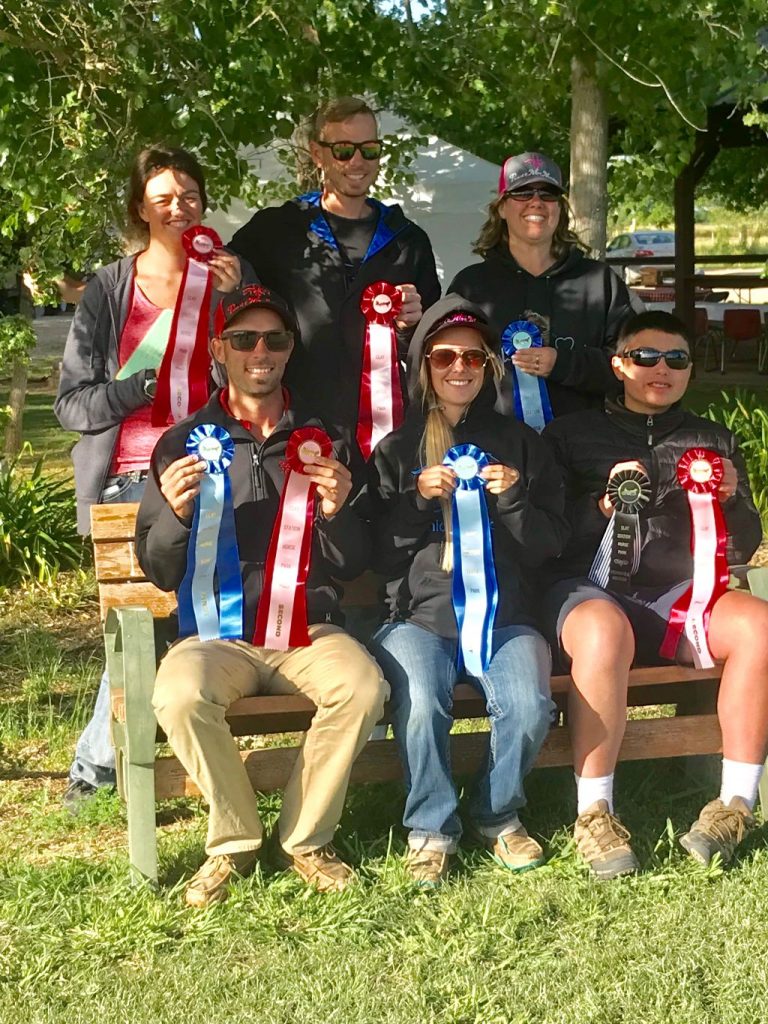 “The first thing I did with the five minis was break them to drive,” Bryce explained. This has now become his forte as clients from Texas, New Mexico, Oregon, Arizona, Nevada and all over California send their miniature horses to Bryce for training. He trains miniature horses for the sport of Combined Driving as well as the show classes of Classic/Western, Country, Single/Pleasure and Roadster. 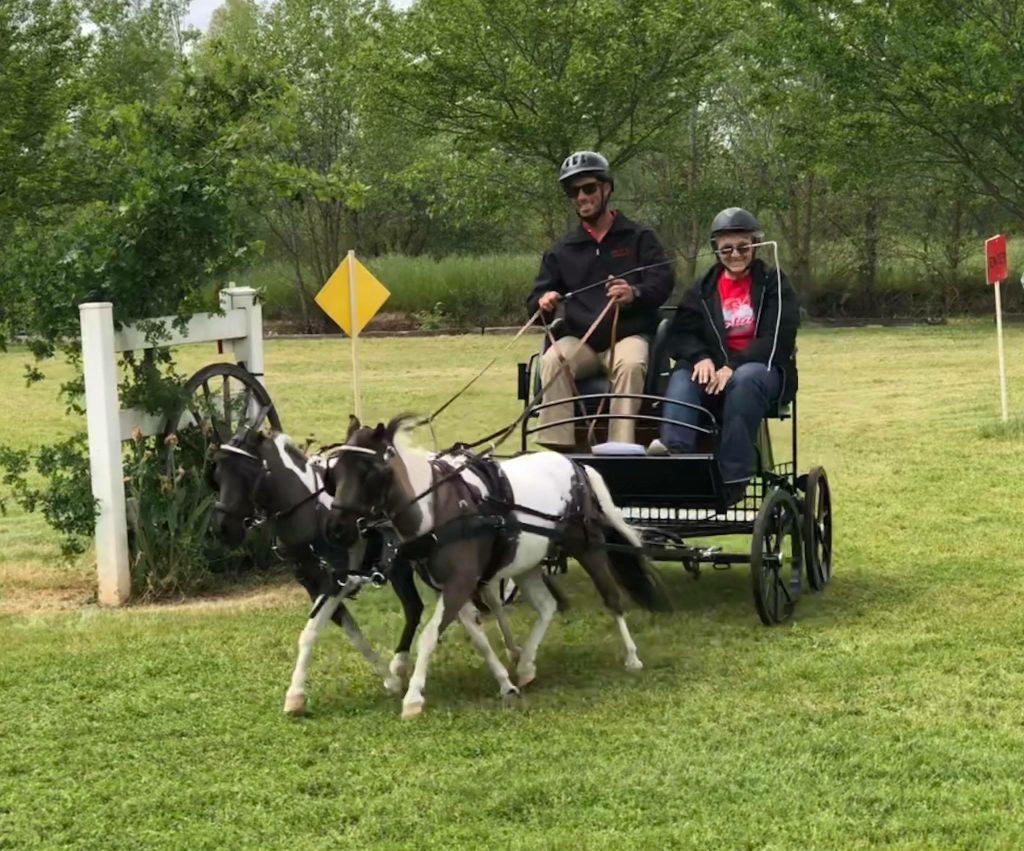 Driving events are not the only miniature horse training Bryce does. He also works miniature horses for halter, hunter in hand and obstacles. “I do 90% of the training on these minis,” Bryce stated as he explained his role in training the 30 plus minis he has at his barn. “My hands and image goes on every horse that comes here.” Bryce does have help from assistants who spot for him while putting a mini to cart. They are also another pair of eyes looking at how the horse is going and can take the lines and drive so Bryce can evaluate the progress viewing from the side rather than behind in the cart. 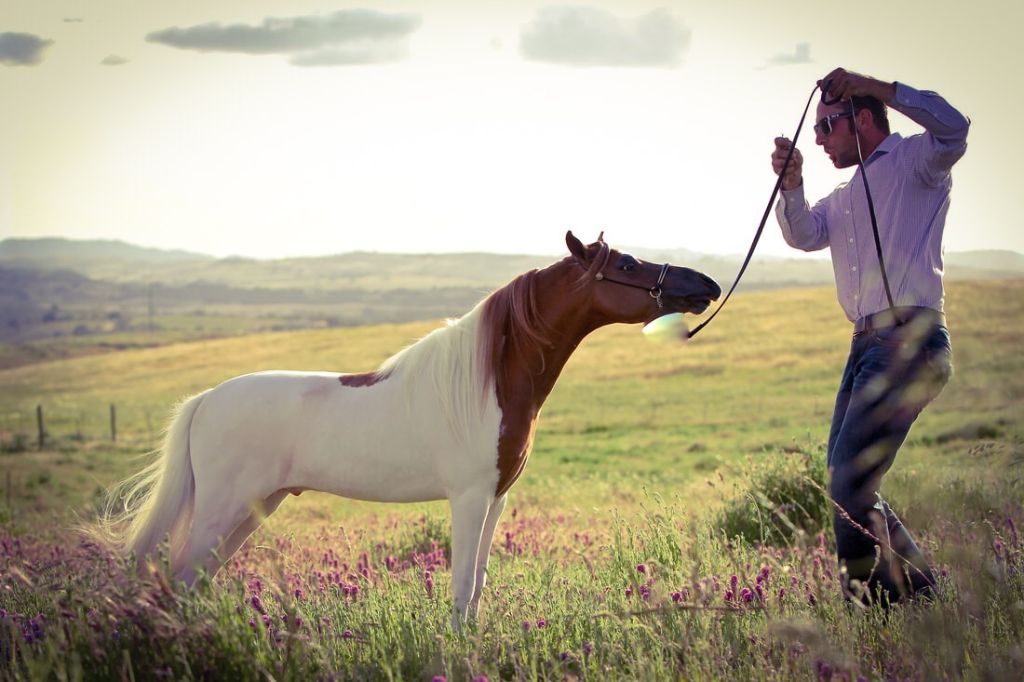 “I give all the owners free lessons when their mini is here in full training,” explained Bryce regarding how he gets the owners involved with their horse. He wants the owner to be able to enjoy their mini horse while in training and upon returning home. Most owners come to the shows. Bryce keeps a horse for as long as 8 months during a show season. He says he can get a mini pulling a cart in about three months start to finish, and has done so with no problems with 98% of the minis he starts.

From Training to Breeding 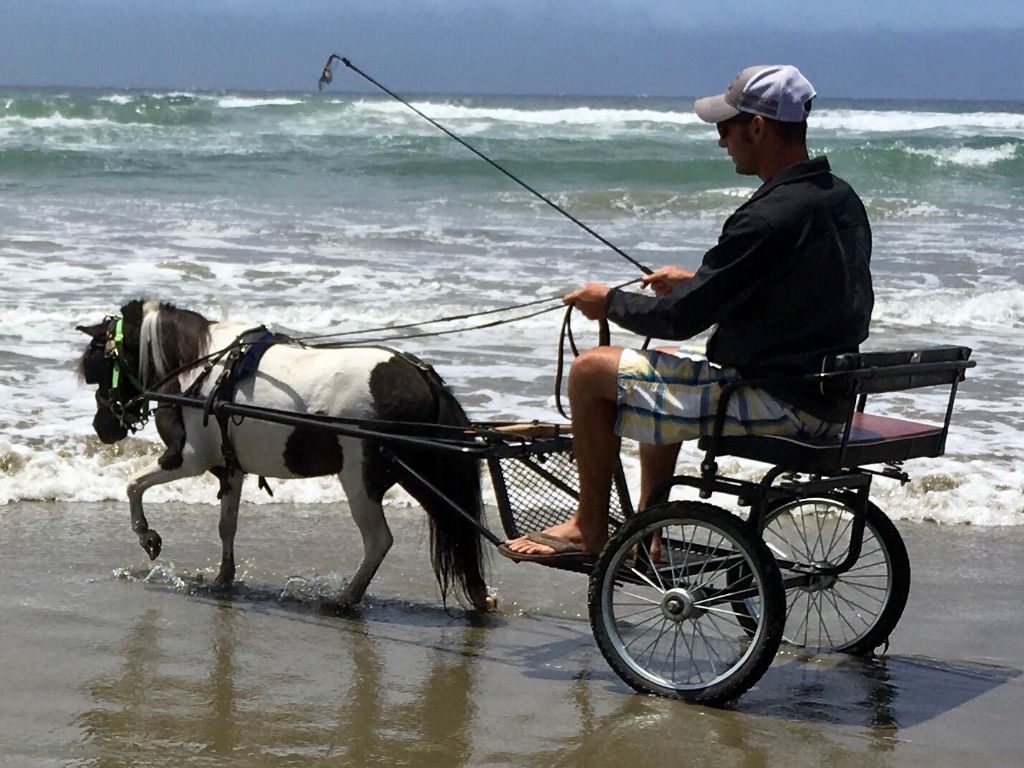 Having fun at the beach with Minis. Photo Credit: Bryce Baker

About 90% of the clientele at Piece of Me Miniature Horses are new clients. Bryce gets local interest going by taking minis out on beach and winery outings. Invariably he is approached by curious on-lookers and he has turned many of them into miniature horse fans. “Having fun with them brings interest,” states Bryce.

Innovation at Piece of Me Miniature Horses 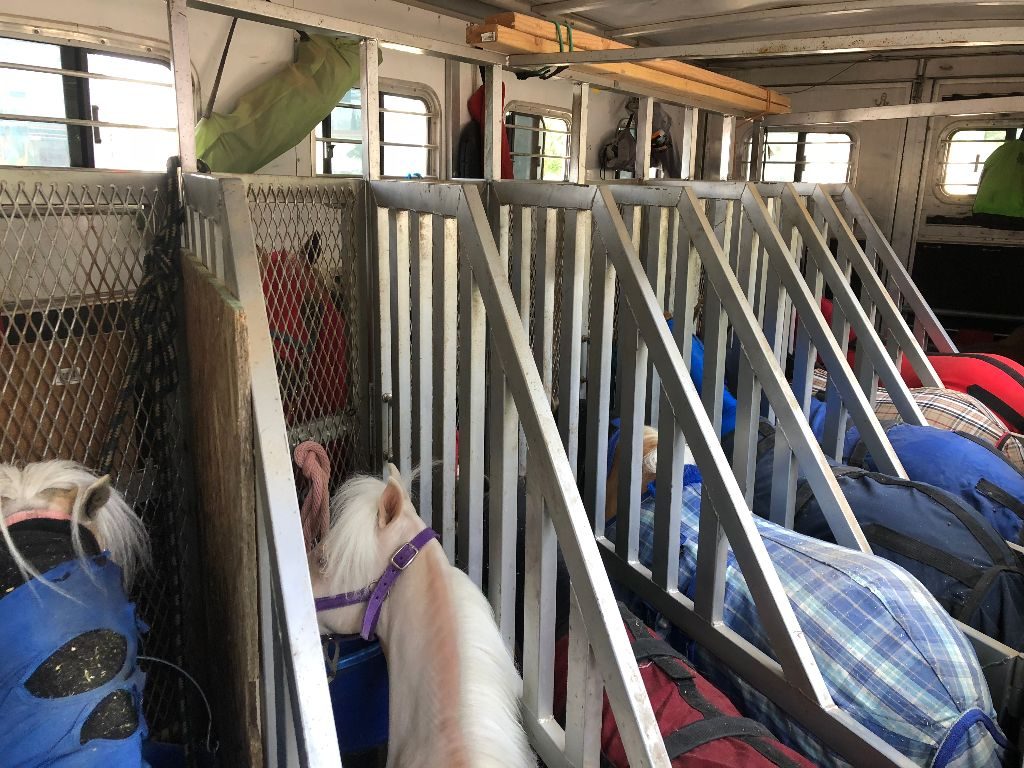 How many miniature horses do you think can fit in a standard four horse trailer? Bryce has specially-designed his rig to house 15 minis on the road. They stop every 4 hours to feed or water the horses while on long hauls – like to Texas for the World Championship. 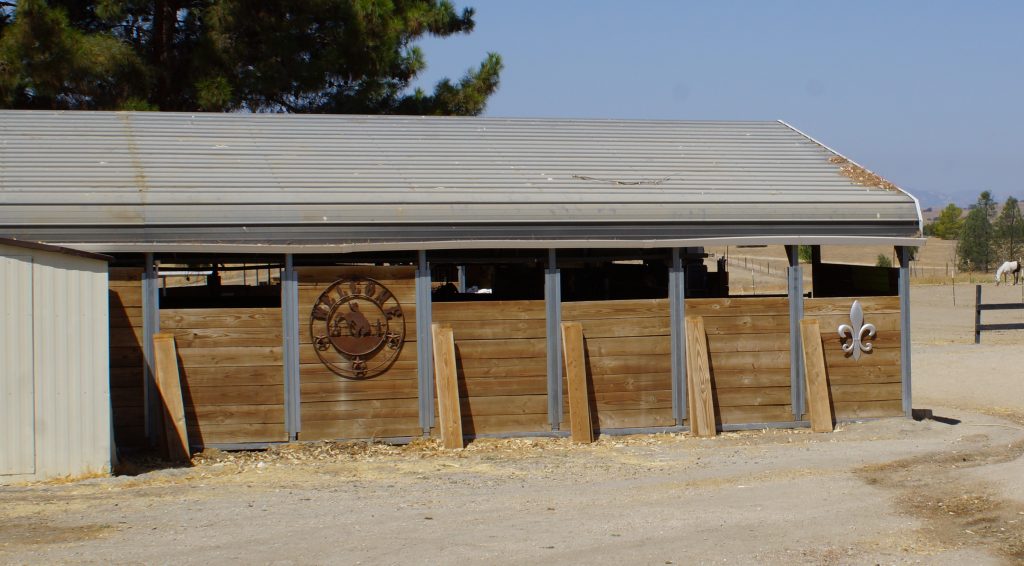 The barn is also a specially-designed Bryce innovation. The roof is a carport. He then sectioned off the inside into 8×8 stalls and a tack room. Each mini room is divided with a solid wall to keep the minis from bothering each other and minimizes chewing and rubbing. There is plenty of room in the aisle way for grooming, tacking up and hooking up to the cart. 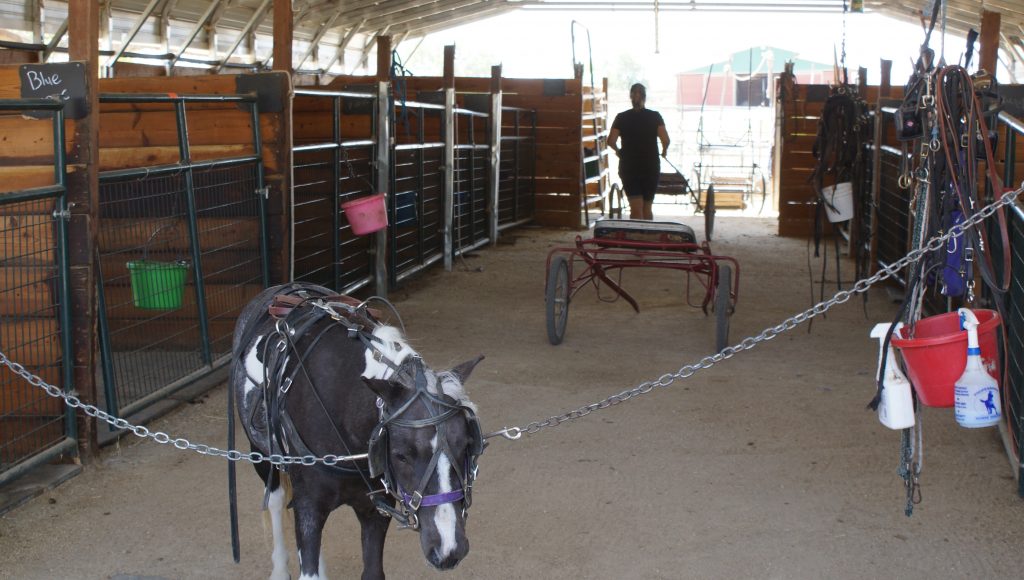 Why Are They Called Miniature Horses? 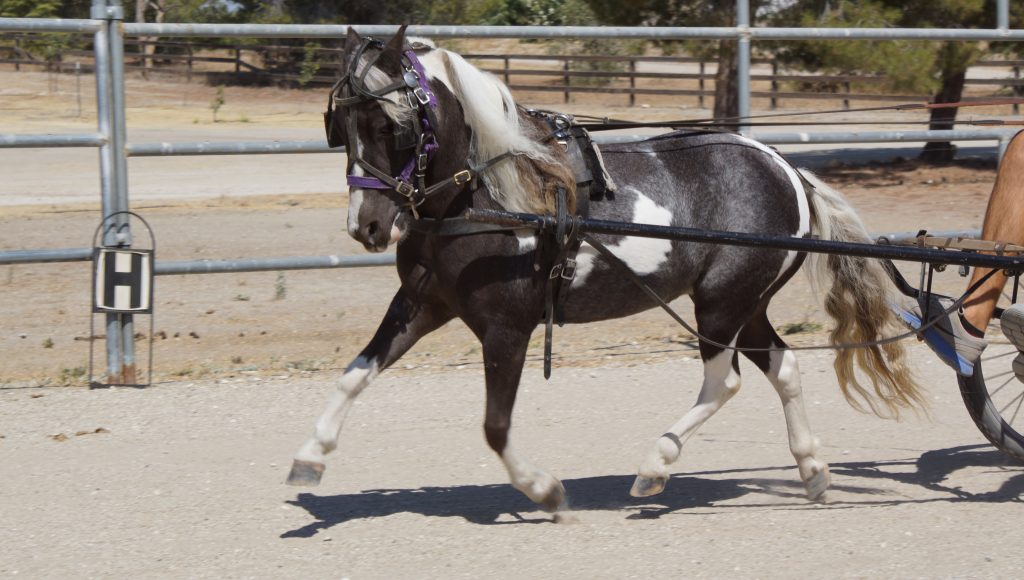 So you might be wondering, “Why are they called miniature horses and not considered ponies?” I posed this question to Bryce. He explained that Miniature Horses are just that, miniature horses. They are basically a shrunk down version of a more refined horse. While Shetland Pony blood runs through many miniature horse bloodlines, the mini stands under 38 inches tall (American Miniature Horse Registry – AMHR) or under 34 inches – at the base of the mane – (American Miniature Horse Association – AMHA) and is more refined and proportioned like a horse not round and big boned and bushy as depicted by the comical “Thelwell Pony”.

What Are the Benefits of Owning a Mini?

Well the best benefit is the upkeep is a fraction of the cost of a full-sized horse. Minis don’t use shoes, they eat small meals, and they take up less room so you truly can have a barn full! Minis are still horses and will react like their full-sized counterparts. Their size makes them easier to handle, but they can still pack a kick and a bite and runoff with you. There appears to be less of a variation in temperaments compared to the cold-blooded full-sized draft horses and the hot-blooded Arabian or Thoroughbred horses. 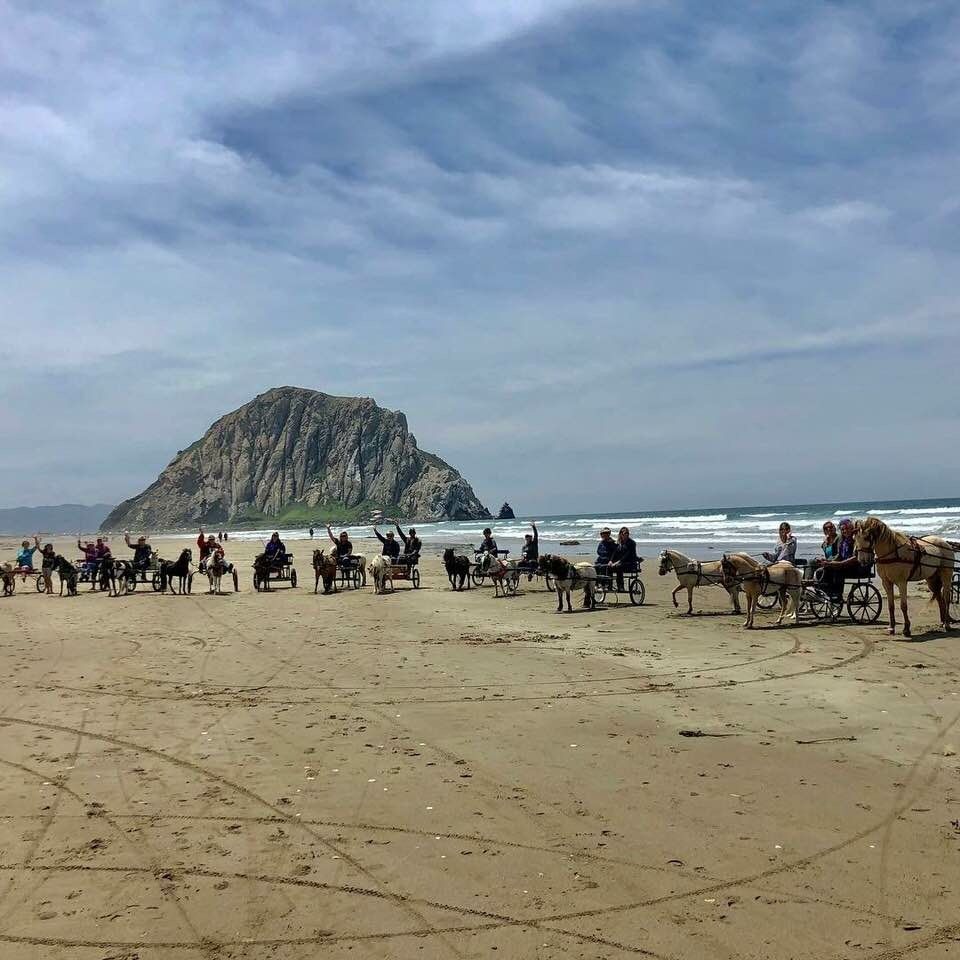 However, minis still provide the horse connection and fun in a pint-sized package. Many riders who find swinging a leg over a saddle more difficult get interested in the fun-size package of a miniature horse. 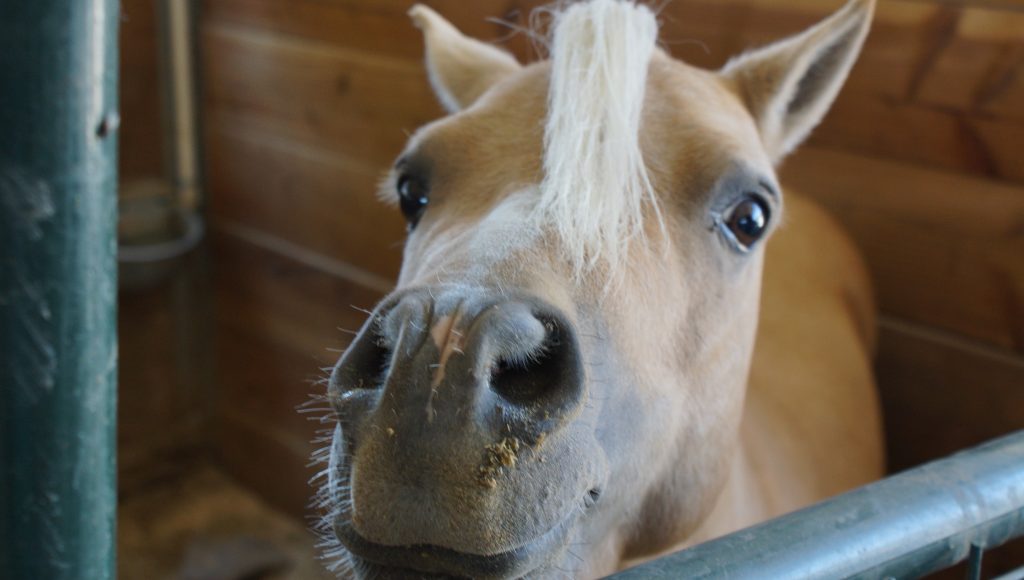 “Find someone who can help you find the right horse,” advises Bryce to people getting started in the fun world of miniature horses. Just like with the full-sized horses, the best ownership situation is with a mini who fits your purposes and abilities.

Does Bryce miss riding horses? Yes, although he rides occasionally, he admitted. “I miss the feel of a saddle and the horse moving underneath me.” However, a feel in the hand and in the body is part of driving a mini as well. Bryce continued, “I teach my clients to feel the movement in the cart.”

The Story Behind the Name

“I live, breath, sleep and eat this business, it really is a piece of me,” explained Bryce when asked to explain the name of his training facility, Piece of Me Miniature Horses. Truly, these miniature horses are a piece of him. 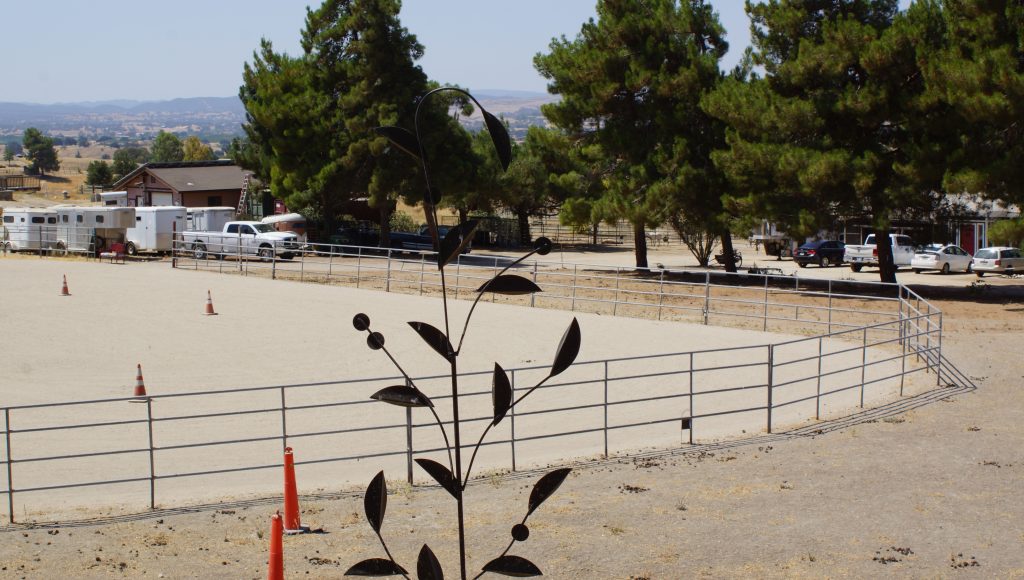 Former Pony Clubber, Eventer and Dressage rider who balanced training and showing with getting a college degree (from Cal Poly SLO), becoming a wife and raising a family.

Looking for the best prices
on new equestrian apparel?