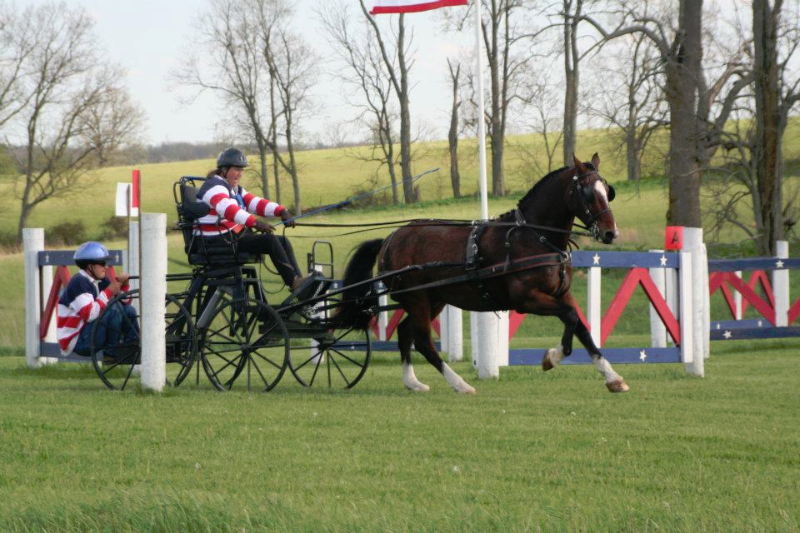 Diane Kastama of Arroyo Grande, CA is trying to raise money to represent the USA at the Para-Equestrian World Championships in Breda, The Netherlands August 2012.

The USA is sending 3 disabled drivers to compete in the Netherlands. All three drivers will be using leased horses in The Netherlands to save on costs. Many countries participate in this event, which is held every two years. Diane won Individual Bronze and Team Silver in Greven, Germany in 2008, the GOLD Medal in Hellendoorn, Netherlands in 2006. She won Individual Silver Medal and Team Bronze in Greven, Germany in 2002. And she had a 5th place finish in Edinburgh, Scotland in 2004. The events in 2002 & 2004 were driven with borrowed horses. To qualify for the event Diane competes against able-bodied drivers.

Twenty one years ago a car crash left Diane paralyzed from the waist down. Although a lifelong horse person and dressage enthusiast, riding without the use of her legs was not much fun and she soon turned to driven dressage and then the exciting sport of combined driving. Her relatives and friends thought she was crazy for taking on a sport that involves sitting atop a tall carriage, pulled by a horse going “hell-bent” for speed.

In the past years she has attended CDEs from Los Angeles to Tucson, Phoenix,Fresno, Gilroy, Lodi , Corvalis, OR, Ocala,FL and Southern Pines, NC. Diane started competing with her home bred Appaloosa’s but now Diane competes with a pair of Section D Welsh Cobs. She drives them single, pair and tandem. Diane has also demonstrated her skills at Rolex, KY, Horse Expo in Sacramento, the “Night of the Horse” in Del Mar, The Equine Affair and various therapeutic horse programs throughout California. She has also participated in the closing ceremonies at the 2006 World Equestrian Games in Aachen, Germany. Diane is always willing to share her skills and knowledge and bring driving to the forefront of equine sports.

Now Diane needs your support, help this courageous and dedicated young woman in raising funds to send herself, her groom/navigator and specially designed carriage to Breda, the Netherlands. Diane leaves August 18th, 2012 and the competition is August 28-Sept 2, 2012.

Donations to Diane can be made by check made out to Diane Kastama, with “Team USA” written on the memo line. Mail checks to:

For more information on Diane or the event email:

dkastama@verizon.net or call (805) 343-6026, 805-458-2428 cell. For more information on United States Driving For the Disabled visit their web site at www.usdfd.org. Tax deductible donations go towards the team of 3 and can be made out to USDFD, and mailed to the above address.

Written By
slohorse
More from slohorse
(click on image to enlarge) Come out and support the Work Family...
Read More