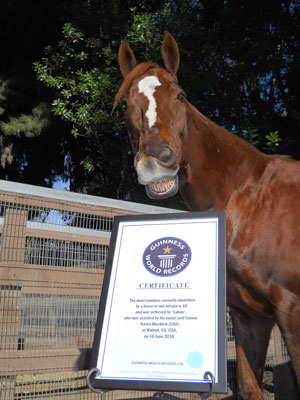 Walnut, California— Lukas (http://www.playingwithlukas.com), the World’s Smartest Horse (according to the World Records Academy) andGuinness World Record Holder (“Most numbers correctly identified by a horse in one minute: 19”), has been featured in Caters! Caters news is the United Kingdom’s leading independent photo and news source and is widely recognized as “The oldest and most established press agency specializing in all the big stories and events across the globe.”

Meet Lukas, a world record-breaking nag, who brings a new meaning to the phrase horse sense. This 19-year-old chestnut Thoroughbred can fetch, sit, rear, and even COUNT on command. Last year Lukas smashed the Guinness world record for the amount of numbers correctly identified by a horse in one minute. He managed a whopping 19 right to the delight of devoted owner Karen Murdock.

Karen, from California, adopted Lukas 10 years ago after he was rescued from his owner’s littered backyard. She said, “He was a racehorse but he didn’t win anything so he was given away. He ended up in someone’s back yard, a bag of bones, with no grazing and very little space. He was eventually rescued and I saw him advertised in the local newspaper. I’ve always loved horseback riding and I wanted to be able to jump and compete at shows. From the start I could tell Lukas was intelligent; he figured out that it was much easier to go around the jumps than go over them.”

Her dreams of shows and ribbons dashed, Karen decided not to give up on Lukas and began to train him in obedience. According to Karen, “I was sent to live with a foster family when I was 14, so I’ve got a strong sense of responsibility when it comes to people or animals in my care.” Lukas much preferred obedience training to being ridden and he took to it straight away. Karen states, “His attention span was amazing and I quickly taught him to come, rear and even sit on command.” Then using a method of repetition, she began to teach him to tell the difference between various shapes and even numbers. Karen, who lives with her husband Doug, expressed that her partner and daughter, Angela, are very supportive of her special relationship with Lukas. “I think they love the way we are such close friends. I see Lukas every day and spend a number of hours with him; I couldn’t imagine my life without him.”

0 replies on “Lukas Has Plenty to Smile About”