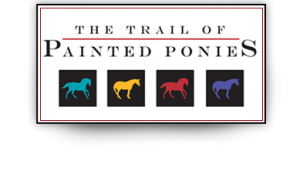 FORT WORTH— The American Paint Horse Association (APHA) and The Trail of Painted Ponies recently announced the winners of their jointly sponsored spring art competition. Conducted in honor of APHA’s 50th anniversary, the theme for the contest was the celebration of the American Paint Horse.

Artists from around the world were invited to submit designs on one of five Painted Ponies forms along with a name for the work and a story. More than 350 artists participated in the two-month competition. In early April, APHA and The Trail of Painted Ponies narrowed the entries down to 20 finalists, which were then displayed online for voting. Over 5,000 votes were cast over a two-week period.

The winning design is titled “Harmony,” and depicts a striking tobiano mare and foal whose markings beautifully blend together. The piece was submitted by Janee Hughes of Aumsville, Oregon, a former middle school art teacher who has designed several other Painted Ponies.

“When I was designing Harmony, I thought about the very close relationship between a mare and her foal, and how remarkable it is that the foal can keep up with its mother shortly after birth,” said Hughes. “Bringing the two together in color and markings was my way of emphasizing this very close relationship.”

Hughes received a $1,000 cash prize from APHA and The Trail of the Painted Ponies for the winning design. The figurine will be available for sale in APHA’s General Store, as well as fine art retailers around the country in early 2013.

“We are thrilled with the winning design,” said APHA Executive Director Billy Smith. “As we look toward our next 50 years, the mare and foal concept is an excellent portrayal of our bright future.”

Lorna Matsuda of Alberta, Canada, won the second place $500 cash prize for her design called “Hidden Affections,” a rendering of Paint Horses concealed among Aspen trees. Nakita Delichte, a college student from British Columbia and a Paint Horse owner, received the third place $250 cash prize for her colorful rendering of “Painted Anniversary.” The design depicted a Paint Horse with the map of the world as the coat pattern.

To see the designs by all 20 finalists, visit http://www.trailofpaintedponies.com/apha-announcement.php.

The American Paint Horse Association (APHA), the international breed registry for the American Paint Horse, headquartered in Fort Worth, Texas, celebrates its 50th anniversary in 2012. In fulfillment of its mission to collect, record and preserve pedigrees of the breed, APHA recognizes and supports 111 regional and international clubs, produces championship shows, sponsors trail rides and creates and maintains programs that increase the value of American Paint Horses and enriches members’ experiences with their horses. APHA has registered more than a million horses in 59 nations and territories since it was founded, and now serves over 58,000 active youth and adult members around the world.

About The Trail of Painted Ponies