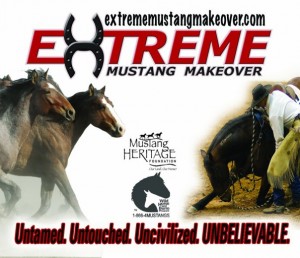 Georgetown, Texas, August 16, 2012 – A standing-room-only crowd at Gloucester County’s Dream Park saw Amanda Brantmayer and her Mustang trainee Pauly D capture the title of champion by accumulating 61.5 points in the compulsories and 111 points in the freestyle for a total of 172.5, or 2.5 points more than their nearest competition. The wild horses and trainers began their training journey in April in preparation for the Extreme Mustang Makeover, which was held August 10-12, 2012, at Gloucester County, New Jersey. Trainers had approximately 98 days to gentle the horse and train it to be ridden for the competition.

Pauly D is a brown gelding that was born in 2006 in the High Rock, California, Herd Management Area. Brantmayer is from Bridgeton, New Jersey. In addition to being named champion, Brantmayer also received a custom Gist Silversmith belt buckle for being the top rookie trainer, as this was her first Extreme Mustang Makeover competition. Pauley D was adopted for $2,000.

Danielle Leh of Bernville, Pennsylvania, and Absolute Honor earned 58 points in the compulsories and 112 points in the freestyle to finish as reserve champions with 170 total points. Absolute Honor is a 5-year-old pinto gelding gathered from High Rock, California, Herd Management Area. Leh received the Young Gun Award, as the highest placing trainer that was 18-21 years old.

The Mustangs competing in the Extreme Mustang Makeover challenge were all geldings gathered from HMAs in California, and the horses were virtually untouched prior to the April pick-up. The horses were judged on their body condition and new skills. The trainers and Mustangs competed in a series of classes that showcased their new skills. The top 10 from the preliminary go-rounds advanced to the finals on Saturday, August 11, where they wowed the judges and crowd with routines set to music. Class results and adoption information is available at www.extrememustangmakeover.com/emmnewjersey.php.

The purpose of the competition is to showcase the beauty, versatility and trainability of these rugged horses that roam freely on public lands throughout the West, where they are protected by the BLM under federal law. The BLM periodically removes excess animals from the range to ensure herd health and protect rangeland resources. Thousands of the removed animals are then made available each year to the public for adoption. More than 3,300 wild horses have been adopted through Mustang Heritage Foundation events and programs since 2007.

The Extreme Mustang Makeovers are made possible through our partnership with the Bureau of Land Management and the generosity of our sponsors Ram Trucks, Western Horseman, Pfizer, Vetericyn, Roper Apparel & Footwear, Twister Trailer, RES Equine Products, Gist Silversmiths, Martin Saddlery and Smith Brothers.

About the Mustang Heritage Foundation

The mission of the Mustang Heritage Foundation and the goal of the Extreme Mustang Makeover events are to increase the adoption of Mustangs across the country. The Mustang Heritage Foundation created the Extreme Mustang Makeover events to showcase the recognized value of Mustangs through a national training competition. The nonprofit organization also created the Trainer Incentive Program and the Youth Employment Program to raise awareness about America’s Mustangs. For more information, visit www.mustangheritagefoundation.org.

About the Bureau of Land Management

The Bureau of Land Management (BLM) is responsible for managing 258 million acres of public lands, located mostly in the West. Wild horses and burros roaming public rangelands are managed in a manner consistent with BLM’s overall multiple-use mission, as set forth in the Federal Land Policy and Management Act of 1976. For more information, visit www.wildhorseandburro.blm.gov or call 866-468-7826.

Written By
slohorse
More from slohorse
On January 28, 2013 The Unwanted Horse Coalition (UHC) and the American...
Read More