The Old Spanish National Historic Trail commemorates the historic trading route that ran from Santa Fe, New Mexico through south west Colorado, up through Central Utah then down across the north west corner of Arizona, through southern Nevada into California and on to Los Angeles. Woolen goods woven in the towns along the Rio Grande were packed onto mules and taken to California where they were traded for horses and mules, which were herded back to New Mexico. 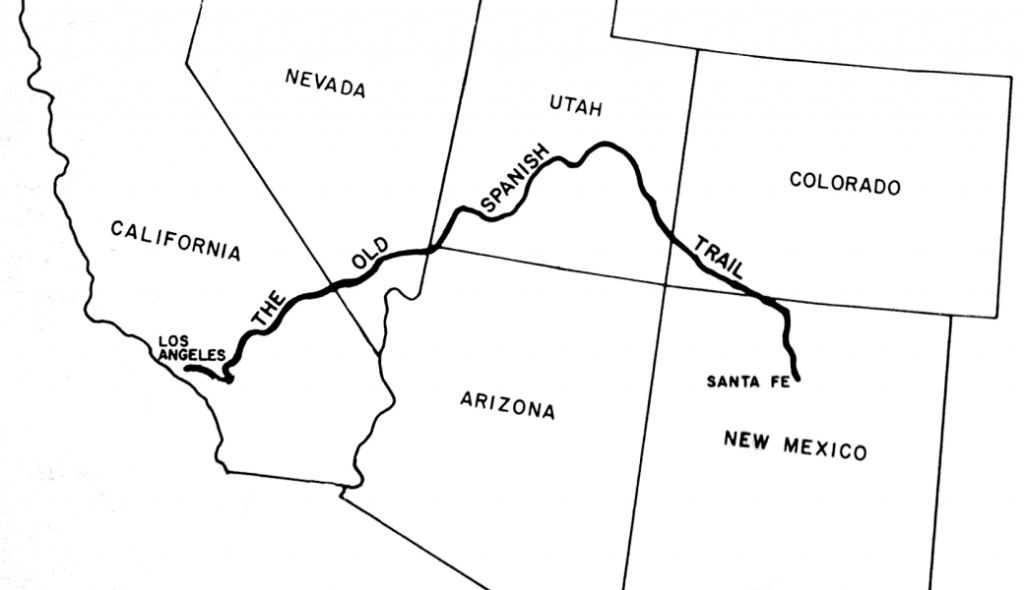 History of the Trail

The Old Spanish Trail was actually neither Spanish nor a trail. The first person to travel the length of the main route was an American man, William Wolfskill, in 1830.  Although, Antonio Armijo did pioneer a route linking Santa Fe with Los Angeles the year before, his route lay to the south in what is now Arizona with less grass and water, and rougher terrain.   With more water and graze, the Wolfskill’s trail quickly became the preferred route. However, the route used varied somewhat from year to year depending on water, grass and Indian relations.  Lieutenant George Douglas Brewerton, of the US Army, with Kit Carson, traveled the route from Los Angeles to Santa Fe in 1848.  Brewerton reported that there would be 200-300 muleteers, and up to a thousand horses and mules on each yearly caravan.

There is a local connection to the Old Spanish Trail. With William Wolfskill, on his pioneering of the route, were Francis Ziba Branch who was granted the Rancho Santa Manuela and was the first European settler in the Arroyo Grande Valley.  With him was also Lewis Burton, for whom Burton Mesa in Santa Barbara was named, who also owned Rancho Bolsa De Chamisal in south San Luis Obispo County.  The Trail Boss of the OSTTREK, Richard Waller, along with many others, lives on the old rancho land, as it comprises the towns of Arroyo Grande and the land south and west of the town. The east boundary of his family ranch is the boundary between the Rancho Santa Manuela and Bolsa De Chamisal.

The ride will replicate and commemorate the Old Spanish Trail trade route. The primary objective of the trek is to educate and promote BCHA and its mission to preserve and protect equestrian access to America’s public lands, and to promote and generate interest in the Old Spanish Trail.

The Old Spanish Trail is part of  our American cultural heritage, and helping to bring this trail to the attention of the nation will help to protect it for the generations to come. The team hopes this trek will inspire others to become involved in the preservation and protection of both the Old Spanish Trail and our priceless public lands.

The first 600 miles is to be ridden in October-November of 2014, the second 600 miles to be ridden in spring-summer of 2015 after the snow melts in the Utah passes. Since much of the route has roads, it is planned that the ride will be supported by vehicles which will move camp each day. There will be a few occasions where it is hoped the riders will be able take pack stock into isolated areas better replicating the original traders. The riders should be able to average 20 miles per day with a rest day each week. Holding to that schedule will allow the trip to be done in 60 days, a better estimate is 65-70 days taking into account the probability of delays for one reason or another.

The trek will take the riders through deserts and mountains, Indian reservations and National Forests. Members of Backcountry Horsemen, particularly of California, Nevada, Arizona, Utah, Colorado, and New Mexico are welcomed, and needed, to help with route finding, camping, guiding and media contacts.  BCH members are welcome to ride along with the team on segments.

The team plans a film and a book to be published about the ride.

You can read more on the  Backcountry Horsemen of America Old Spanish Trail Trek (OSTTREK) at their website: http://wanderingthewest.com/old-spanish-trail/ost.html or on Facebook. 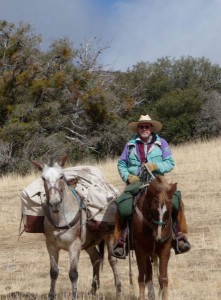 Richard will scout the trail and shoot film for a crowdsourcing fundraising campaign in April via motorcycle. The indiegogo.com campaign to fund the scout trip can be viewed at; http://igg.me/p/691219/x/6268651. He can be reached at homeranch@gmail.com.

Please note, all planning is tentative and subject to change.