Nestled in the hills northeast of Paso Robles lies a forty six acre working horse ranch named Close By Ranch. A sign hangs in the twenty two stall barn that says “Saddle Up and Follow Your Dreams.” This is the motto CeCe Campbell has followed most of her dream life  – owning and showing Quarter Horses.

Owning Close by Ranch is part of that dream. Cece is the current Pacific Coast Quarter Horse Association (PCQHA) President, and recently returned from the American Quarter Horse Association (AQHA) Convention held in San Antonio, Texas. At the AQHA Convention, Cece served on the Marketing and Membership committee, as well as on the Young Adult Task Force, which is focused on reaching the young adult riders. 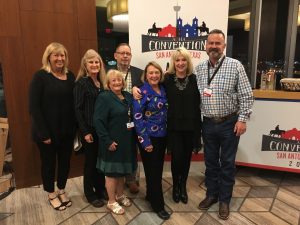 After serving for many years on the PCQHA Board of Directors, Cece has stepped up and is now trying to bring a fresh approach to the role of President. She says, “I’m incredibly passionate about the American Quarter Horse, the AQHA, and its’ members. I feel we need to become more member driven, so we can listen to our members, and respond to their thoughts, concerns and ideas.” This is Cece’s way of giving back to the Quarter Horse industry she has been involved with since she began showing at the age of twelve.

Born in Jacksonville, Florida, Cece (short for Caroline) and family moved to San Diego, CA when she was five. “My family was not horsy at all. They didn’t want me to have horses,” she remembers. Her parents were really hoping that the horse crazy little girl would grow out of her desire to have horses, but she never did. Somehow Cece found ways to ride all over San Diego, be it trail riding or taking lessons. When she was twelve, her parents relented and bought her first horse, “Shasta Man”, a sorrel Quarter Horse gelding. They made it clear, though, that she had to work hard to keep him. “They were going to sell that horse if I didn’t keep my grades up,” she said.

CeCe began showing in showmanship and western classes including pleasure, trail and equitation. “Showmanship was my thing though,” she quipped and laughed. Her next Quarter horse was beautiful, but had navicular, so Cece learned a lot about horse health and how soundness matters. Nonetheless, she fared pretty well in the show ring. She even moved in with a trainer for a while who “lit the fire under me,” CeCe says. She gave lessons to kids and showed Saddlebreds as well.

A Life with Horses

Off and on, Cece worked at riding horses, and sometimes mules, at ranches, while going to college. She tried a year at the University of Arizona, but told her parents, “This is not for me.” Her mother helped point her in the direction of Colorado Mountain College, where she received a two year degree in Ranch Management. During this time, she worked for an Appaloosa ranch in Rifle, CO for owners Jack and Johnnie Jackson. The ranch had a breeding operation, so Cece rode the offspring and showed english, western and halter.  She even showed one mare to Grand Champion at Halter. CeCe grinned thinking about those days in Colorado, “I loved it. I met my husband there.” She married Doug Zimmerman, and they had a daughter named Karri.

Cece ended up moving back to Grand Junction to take graphic arts classes and work for a local newspaper. She also went to work for an ad agency in Grand Junction, but later broke off on her own with a friend and opened her own full service ad agency called The Graphic Solution. However, the draw of the horses proved too strong for Cece to stay. Although she bought and sold horses on the side, she wanted to pursue more within the horse industry. Responding to a half page ad in the Quarter Horse Journal, Cece applied to become the Executive Secretary for the Intermountain Quarter Horse Association. Despite interviewing in Utah, with literally “hundreds of people,”, she got the job. She and Karri moved to Sandy, Utah and Cece worked for the Association for seven years. During her stint in Utah, Cece received her Bachelor’s Degree in Business Administration.

Around 1990, Cece moved back to San Diego. It was there at an AQHA Convention that she met the owner of the California Horse Trader publication, who was looking for a General Manager. Cece fell right into that position with her graphic arts, advertising, and equine background. She stayed for six years in San Marcos where the CA Horse Trader was headquartered. Meanwhile, she completed her Masters in Business/Technology with the University of Phoenix, and began showing her Quarter Horse mare, “Beaus Dolly”. Karri learned to ride and show her too.

In 2002, Cece and husband Brad Campbell moved onto Close by Ranch in Paso Robles. Although she had worked for other companies, Cece had to the opportunity to return to her work with CA Horse Trader, turning a room in her house into a satellite office. She retired from the CA Horse Trader in 2011 and began following her dream of showing again with a passion. Not only has she found tremendous success, particularly with her spectacular gray mare “Skys Lady in Blue” (Annie for short), but she now enjoys sharing the experience with her darling granddaughter, Tailyr Gromelski. Together they have racked up an impressive list of championships. Here are some of the 2016 highlights:

Cece is truly living the dream. She says, “I’ve always just wanted to ride!” As you meander down the long driveway of her horse ranch, there is one more sign that says, “Thanks for sharing the dream.” Well said, CeCe…thank you for inspiring that dream in so many of us!