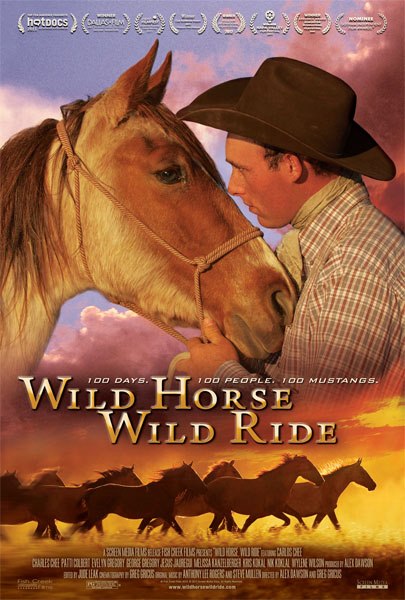 August 22, 2012 — Screen Media Films has acquired the North American rights to the award-winning documentary Wild Horse, Wild Ride. The film follows a diverse range of characters as they transform wild Mustangs into show horses in just 100 days. Directed by husband-and-wife team Alex Dawson and Greg Gricus, the documentary is set to hit theaters in New York on August 24 with a platform release nationwide throughout September.

“As soon as I saw WILD HORSE, WILD RIDE I knew that Alex Dawson and Greg Gricus had captured a very real and special occurrence in our world – the emotional bond between man and horse. We are thrilled to work with such talented filmmakers in bringing these stories of trust and love to the public,” said Screen Media Films president Blech.

“We’ve been blown away by how festival audiences around the country have embraced WILD HORSE, WILD RIDE,” said director Alex Dawson. “Suzanne and the Screen Media team have been so enthusiastic about the film from day 1, and to have it now released in theaters is the culmination of an amazing journey.”

WILD HORSE, WILD RIDE tells the story of the Extreme Mustang Makeover, an equestrian contest that dares people to each tame a totally wild Mustang in order to get it adopted into a better life beyond federal corrals. Stunning and poignant, Alex Dawson and Greg Gricus’ debut feature documentary chronicles a handful of unforgettable characters from their first uneasy meeting with their horses and over three months as they attempt to transform from scared strangers to the closest of companions.

The film will make its theatrical debut at the Village East Cinema in New York City. Tickets are available at www.villageeastcinema.com. On opening night, a panel including trainers from the film, the directors, Mustang Heritage Foundation’s Patti Colbert and others will be available for a question-and-answer session.

Written By
slohorse
More from slohorse
Trail work — maintenance and creation — is tough. It takes a...
Read More