2013 was considered the driest year in recorded state history. Now- in April, 2014 we are still included in this ongoing drought. A drought is considered a prolonged period of abnormally low rainfall causing a shortage of water. Now, if you’ve been paying any attention to the news, it’s no surprise that here on the Central Coast, we’re considered to be in a state of emergency. While this is affecting all of us in the big picture, our farmers are being hit the worst.

“it’s no surprise that here on the Central Coast, we’re considered to be in a state of emergency”

This time last year things were much worse. Through September 2013, local farmers suffering from the drought were able to apply for assistance through the Farm Service Agency. The maximum Emergency loan was $500,000. While this may have helped some people sleep sounder at night, it certainly was not the end of the problem. Back to this year, we’re still suffering from a critical water shortage. This is leaving farmers wondering what’s next.

The Ag Industry is having severe consequences. The effects of the drought are widespread, affecting farmers and ranchers up and down California. Cattle ranchers are having to thin their herd in order to feed, and those relying on natural grass are having to buy alternatives to feed their animals. This means that the feed demand has increased, and the drought is killing the supply. I talked to Terry Brazil of Brazil Hay and Co. in Santa Margarita about the negative effects that this has had on his business. The ground was so dry this year, he couldn’t even plant. He said, “There was just no moisture to get the seeds started.” He’s not the only one either, there’s plenty other farmers in the same situation. 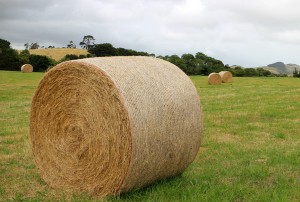 While this has had a substantial impact on Terry’s business, he doesn’t think that the drought has been bad for all hay farmers.  “I wish I had 400 acres of hay, what’s growing right now looks great!” With the rain we’ve gotten lately, things have started to look up for farmers. Those who planted at the right time are thriving.

With the increase in prices, businesses that can keep up with the demand aren’t complaining. However, on the other side of things; those who planted too early weren’t so lucky, everything withered. Terry told me that it’s all a guessing game, you can’t really predict what mother nature has in store.

“Prices of milk are already higher than they have ever been, we may be expecting a 20% increase in the next year or so.”

While the hay industry is struggling to keep up (or stay in business for that matter), cattle ranchers are faced with even more difficult decisions. As I mentioned before, beef farmers are able to sell their cattle, but that isn’t the option for dairy farmers. In order to make milk, you have to have hay. Typical dairy cows can eat around 20 pounds of hay per day, this is what gives them the nutrients to produce quality milk. Prices of milk are already higher than they have ever been, we may be expecting a 20% increase in the next year or so. California is one of the top dairy producing states because of the alfalfa that’s grown in the Central Valley. Conditions are even worse out there, so farmers can’t look to them for help.

Bottom line is, the industry is struggling to keep up with supply and demand. Just like anything else, there’s pros and cons to the effects of the drought. There’s just no easy way out. All we can do is hope for the best, and pray for rain!

Are you struggling to feed in this drought? Tell us in the comments.