Memorabilia and collectibles to also be sold 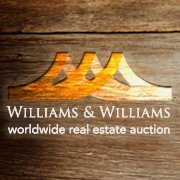 Tulsa, Okla., June 19, 2012 – The landmark Roy Rogers Ranch, previously owned by Roy Rogers and Dale Evans, the duo that captured the hearts of a nation as two of the most popular cowboy and cowgirl entertainers of their generation, will be auctioned on Thursday, July 12 at 6 p.m. PDT by Williams & Williams, the premier brand in real estate auction. The auction includes the horse ranch with numerous equestrian facilities including stables and a half-mile horse track along with a theater, two residences and a bunkhouse. Collectible Roy Rogers’ possessions and memorabilia will also be sold separately at the auction. Bidding will open at $100,000 and interested buyers can bid on site or live from anywhere at auctionnetwork.com.

Framed by picturesque mountains and located in the high desert region northeast of Los Angeles, Rogers and Evans owned and operated the property from 1965 to 1998, using the ranch primarily as a horse training and breeding facility. Today, it’s still filled with collectible possessions and memorabilia. Some of the more notable items include an authentic Wells Fargo buckboard wagon that was used in the movies, a one-man-band instrument Rogers used to entertain guests and a Decker Brother’s 1863 Baby Grand Piano.

The barn was built by Rogers himself and is currently configured for theater style seating to show movies. Many of the tools he used to build the barn are still hanging on the walls today.

“The ranch is still very much as it was when Rogers and Evans owned it with some modern day improvements made including an irrigation and livestock watering system that services 10 pastures, paddocks and various livestock facilities,” said Eric Johnson, Williams & Williams’  Vice President  of Farms, Ranches and Land Sales. “It’s suitable to operate as an equestrian training facility as well as a unique Americana attraction.”

The property contains two residences – a 1,700+/- home, with three bedrooms and bathrooms and a 1,200+/- square foot brick home (original to the ranch when Rogers and Evans purchased it) that has been converted into a museum to showcase Roy Rogers memorabilia including collectible toys, radios, furniture and “Roy Rogers Double R Bar Ranch” branded items. There is also a 1,500+/- square foot bunkhouse which provides a large living/reception area with two carpeted bedrooms and one bath.

The property also boasts a stable with two tack rooms and 15 stalls, most of which are outfitted with watering systems, lighting and feeders. Other equestrian features include a half mile track, with an inner rail irrigation system to condition the track, 10 fenced in pastures, a four horse electrified walker and a 50-foot round pen with metal roof.

This is one of several high-profile auctions for Williams & Williams in June, including an ultimate sport flying property in Rodeo, New Mexico known as the Sky Gypsy Café and former Delta Air Lines President and Chief Operating Officer Hollis Harris’ classic Southern estate and carriage house in Peachtree City, Georgia.

For more details about Williams & Williams’ auction of the Roy Rogers Ranch, visit http://www.williamsauction.com/royrogers. To see the list of memorabilia for sale, visit:http://www.auctionnetwork.com/live-auctions/roy-rogers-memorabilia-and-ranch-auction/207120. People interested in touring the property can attend one of the public open inspections on Sunday, June 24, July 1 and 8 or two hours prior to the auction.

Williams & Williams® is a worldwide real estate auction leader. The only auction company to combine the proven effectiveness of live, at-the-property auctions with the global reach and convenience of real time, interactive bidding, Williams & Williams’ auction teams sell real estate throughout the United States and abroad. We have a proven performance record for all types of real estate sales including residential, commercial, farms and ranches, and distinctive properties.