It was a lovely morning as I pulled up to the barn. From the car I could see several happy horse heads sticking out of their stalls, including my own horse, who gave me a whinny as a greeting. As I sat there, unbuckling my seat belt and gathering my things, I could hear it…that all too familiar banging coming from inside of the barn. It was intermittent at first, but as time went by and as I got out of the car, it sounded as though someone was ready to take the barn down. Yep, it was the “monster” who lived across from my horse begging for treats.

Now, the “monster” is actually a lovely paint horse who is about 3 years old and a joy to ride. She’s got personality plus, and everyone at the barn loves her…that’s the problem. Since she came to our facility, she’s managed to not only train her owner on how necessary treats are for her survival, but she’s also trained many of the other boarders who can’t walk down the barn aisle without tossing her a carrot or a cookie. At first it was cute…a little head bobbing, pricked ears, maybe a little whinny, but it has become something of a nightmare over the months, and now people throw her treats or food just to quiet her down enough to not disturb their own horses in the groom area or cross ties.

This is not an uncommon phenomenon, especially, it seems, with new horse owners; treating their horses is something they do to show affection and as a reward. Some people even carry around little bags of treats around their waists or stuff carrots in their pants or coat pockets. Almost as would be done with a dog learning clicker training, these people slowly teach their horses to “work for food”…unfortunately, horses are not like dogs. The horse understands and learns that his owner is a treat machine, and begins to expect food. This expectation may at first cause him to do favorable behaviors – come in from the pasture when he sees you at the gate, keep his eyes on you in the arena while you’re working, etc., but over time the use of treats as a training device begins to cause problems.

A lovely lady that I know who is older and just got her first horse, went down the route of “treating”. She liked how “happy” her horse looked when she saw her coming down the barn aisle, and she liked how she was able to call her name and the horse would come running to the gate from the turnout arena.

“Wow, she’s really bonding with me,” the lady said. Eventually, though, her mare became pushy; she expected those little chunks of carrot every time that her stall door was opened and she would almost trample her elderly owner whenever she got near the door. On one occasion, she burst forward so quickly that she knocked her owner over, giving her a concussion, and on another occasion, she nipped the back of her owner’s arm so hard that she left teeth marks.

Yet another girl that I know has a gelding who has permanently damaged his front feet and legs from pawing at his stall door, much like the mare I described above, because he lived in a place where all of the boarders gave him treats for his “cute behavior”. So, is there ever a good time to treat your horses?

I buy a large bag of carrots from the supermarket every couple of weeks. My horse gets a good handful of those carrots almost every time that I am at the barn…so, why isn’t she a “treat monster”? It has everything to do with “how” I treat my horse.

I avoid giving treats with any discernable regularity. Sometimes I’ll give a piece of carrot as I pull my mare out of her stall (always after the halter is put on), and sometimes I won’t give her one until I’m tacking her up, still again, sometimes I don’t give her anything at all until after we have finished working and I am putting her away. This doesn’t allow my mare to “expect” a treat for any specific behavior, and I don’t carry treats around with me. I also always avoid giving my horse a treat while she is in her stall with her head hanging over the door, because this is what trains horses to “bang” or “paw”.

Treats are not something that I use as a training tool, and when I am out in the arena working with my horse, I don’t give her anything. I don’t want her to equate good behavior with a food reward. My horse knows that she must give me my space when she is on a lead line or even working free, and having a pocket full of treats would undermine this notion. My horse knows that her “food reward” comes in the form of her grain mixture (a small scoop of wet pellets with her supplements mixed in) that is in her stall when I put her away after a workout. I will also add a few carrot pieces to my horse’s hay net or in her supplements, but never while she is in or around the stall – I don’t want her to see me putting these things in her stall.

Finally, I have put a sign next to my horse’s stall that kindly reads “Please, Do Not Feed Me Treats”, and I have personally spoken to my fellow boarders about my wishes and my reasoning. Several horses who used to be “treat monsters” are now getting much better because their owners have adopted the above principles. Unfortunately, bad behaviors are much quicker and easier to create than to break, so for some it will be a long road.

Everyone has their own way of doing things, and their own training methods that work for them. For me, I have learned that “treating” and using food as a reward does more harm than good. So, if you have a “treat monster” on your hands, it’s best to take some steps to remedy the behavior so that you don’t end up knocked over, nipped, pushed around, or with a horse that damages his feet and legs or simply annoys your fellow boarders.   And above all, please never feed other people’s horses while they are in their stalls! 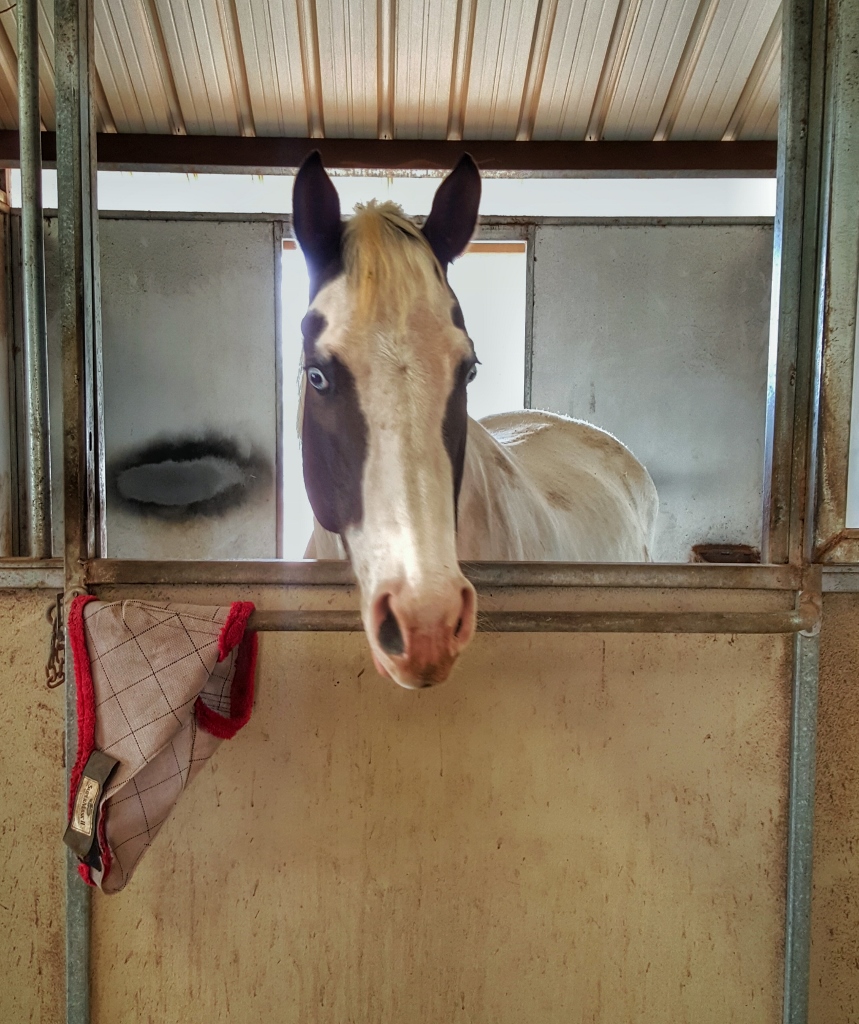