It’s a great place to ride on a cooler day, since the summer sun can heat up the sand. However, it can be a pleasant ride even on a warmer day as there are patches of shade and most likely water in the riverbed. Well, let’s go!

A Long Ride Through History in the Salinas Riverbed

The Salinas riverbed has been a popular SLO County riding place for years. Starting at the De Anza Estates Equestrian Arena (aka the Home Depot Arena) and heading south, one can meander through the riverbed for about 10 miles one way to the south. Riding the riverbed takes one along parts of the Juan Bautista de Anza historical trail, which was traveled by expeditions making their way up to San Francisco back in the years of 1774-1776, just before and as the Revolutionary War was beginning to create our United States of America on the East Coast.

During the years of 1774 -1776 many Spanish settlers were making their way up the California coast from Mexico. Juan Bautista de Anza led one of these expeditions and is noted for establishing the San Francisco Mission and Presidio.

California at this time was mostly wilderness with only a handful of missions (San Luis Obispo est. 1772) to note as landmarks one might hit along the way. Over 200 settlers made their way up the coast in one of the expeditions. This group is known to have established the San Francisco Mission which was finalized in 1776.

One mission father noted in his journal that woodpeckers hid acorns in the large Oak trees situated along the Salinas riverbed. One of the locations he noted is now located near the Wranglerette Arena off Aragon Road in Atascadero. The arena is close to another trail head marker of the Juan Bautista de Anza Historical trail.

A long ride through history traveling south from the De Anza Estates Equestrian Arena (Home Depot Arena) explores the part of the Juan Bautista de Anza trail noted in Father Font’s notebook. All these years later, you can still find acorns housed in woodpecker holes in the oak trees.

One can ride for about 10 miles to the south one direction. Most of the ride is through the sandy riverbed so know that deep sand and water crossings will be part of the experience. Motorcycles are NOT permitted, however, they can still be found in the riverbed. Watch for gravel trucks crossing at Halcyon Road.

The route will end near Rancho de Rio which is off Santa Clara Road in Atascadero. Here you will find a private bridge and the river closed off. For the return trip you will backtrack riding through the riverbed back to your staging area. If you go out and back that is about 20 miles! For a shorter ride you can turn around at Halcyon Road or at any point along the riverbed.

How Does One Get to the Staging Area?

Staging Area for a Long Ride Through History

Park your rig at the De Anza Estates Equestrian Arena (a.k.a. The Home Depot Arena) in Atascadero.

Notes for a Perfect Day

A big thank you to Karen Gleason for providing the cover photo and some of the info for this ride.

All other photos: Sharon Jantzen Photos 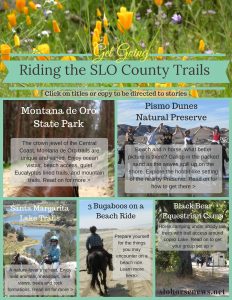 Get Going! Explore the wonder and beauty of the SLO County trails from the best place on earth, the back of a horse. To keep this info at your fingertips we have developed a FREE Hot Sheet that will direct you to these these stories. We’ll continue to add trail ride stories to our website. You can stay up-to-date by becoming a SLO Horse News herd member. Get your Riding the SLO County Trails Hot Sheet here >.