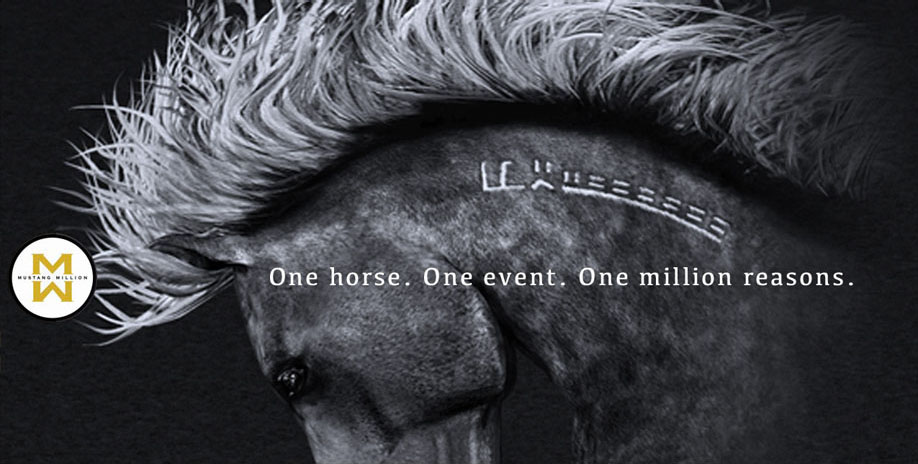 (GEORGETOWN, TX – Sept. 12, 2012)  The Mustang Heritage Foundation (MHF) today announced that its annual Supreme Extreme Mustang Makeover competition will be reformatted and achieve new heights in 2013 with the Mustang Million. This ambitious event seeks to place 1,000 wild, untouched horses into adoptive homes and be eligible for the performance competition with a $1,000,000 cash and prize purse.

“We’ve successfully adopted more than 3,300 horses through our training programs and competitions since 2007,” said Patti Colbert, MHF Executive Director. “We have a tremendous base of trainers and supporters and decided that 2013 was the year to put the equine world on its heels. The mustang has arrived.”

Mustang Million is scheduled to take place in Fort Worth, Texas, in September 2013. Eligible horses will be for this competition will be available at six adoptions in five cities across the United States in April and May: Fort Worth, TX; Burns, OR: Murfreesboro, TN; Norco, CA; and Elm Creek, NE.

Trainers can adopt the horse of their choice directly or can work with clients who want to adopt a horse and put it in the competition.

“We’ve tried to make this new level of competition attractive and achievable to a broad range of horse enthusiasts across the country,” explained Colbert. “We have initiated a no-fee competition and will allow anyone to adopt and have a professional trainer prepare and show their horse in the competition.”

Mustang Million will feature an adult division, a youth division and 12 specialty classes. There is a place for all horse enthusiasts from professionals to recreational riders. The specialty classes will range from in-hand classes, where horses will be shown at halter and not ridden, to working cow horse classes with walk-trot-only classes in the middle.

The youth division is open to horse enthusiasts between the ages of 8-17, and they will be competing for $50,000 in prize money.

“The competition promises to continue the win/win formula for horse, trainer and the survival of wild horse herds on Bureau of Land Management (BLM) public lands. Our trainers say the majority of these horses are willing and smart, and trainers get a gratified feeling by the transformation that takes place during the training period,” said Colbert.

Colbert also identified a significant value of these programs to the American taxpayer.  “Each horse that sits in long-term holding costs the government about $10,000 in its average lifetime for feed and care. Putting 1,000 horses into private care will save taxpayers approximately $10 million. That’s why the $1 million in cash and prizes is a good investment.”

Mustang Million is being produced in cooperation with the BLM and through the support of Western Horseman, Ram Trucks, Pfizer, Twister Trailer, Vetericyn, Roper, Martin Saddlery, Smith Brothers and Gist Silversmiths.

Since the first Extreme Mustang Makeover event was held in 2007, the Mustang Heritage Foundation has facilitated the adoptions of more than 3,300 gentled American Mustangs. In partnership with the Bureau of Land Management, the Foundation will continue to increase its efforts to raise awareness of adoptions of America’s Mustangs.

Written By
slohorse
More from slohorse
The Montana de Oro Endurance Ride is coming up on Saturday...
Read More