Recently, I got the opportunity to talk to a local teen named Aubree Scobie about her goals and accomplishments throughout the equine industry. At just 15 years old, Scobie already has plenty to brag about!

Passion in the Saddle

If she’s not riding her horses, she’s at the beach or hunting with her grandpa. But not much can compare to the passion that she has for being in the saddle. Aubree has been riding since she was about three years old, and she has been competing ever since. Some of the events she participates in include: barrel racing, goat tying, pole bending, team roping, breakaway, steer stopping, and ribbon roping. For those who aren’t familiar with goat tying, Aubree gave a short summary: “Goat tying consists of running down an arena on horseback and dismounting while the horse is still running, to tie a goat tied to a stake in The middle of the arena. You pick up the goat, laying it down so it is on it’s left side, and tying it’s front right leg and both backs together with a goat string. The goat must stay tied for six seconds.”

She also rides reining, as well as pleasure. It’s safe to say that riding and her horses are a huge part of her every day life. She currently owns five horses, named Smoke, Shakira, Misty, Gabby, and GP.

Not too long ago, Scobie and her reining horse, GP or GAMEPLAN, teamed up to compete at the APHA (American Paint Horse Association) Youth World Show in Fortworth, Texas. She won the world title in goat tying, got reserve world champion in the stake race and pole bending, and fourth in barrels. But she says “The cumulative affect of my victories was I won the Novice Youth all around, the novice all around saddle, three buckles, and a $1000 scholarship.” When I asked her about her overall experience there, she said “The finest part for me of the APHA youth world show, was the constant meeting of new people from different places, I met people from Texas, Oklahoma, and even people from Holland and Australia who share the same passion as me.”

Go in to it saying I am going to do the very best I can.

Aubree says her advice to younger riders who wish to be competitive is pretty simple, you can’t win them all. She says “My advice is to not go to each event and say I am going to win this event/class. Go in to it saying I am going to do the very best I can. You want to look back and say I did everything I possibly could do for it to be my best.” I think Scobie’s advice can be applied beyond competition, and that kind of positive attitude is something more of us should strive for. 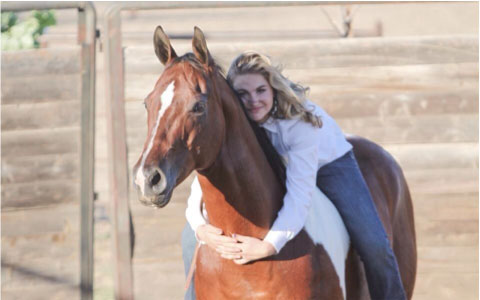 That same positive attitude that has helped her achieve so much already, is sure to serve her in the future. She says, “I would like to be a large animal vet.” After talking to her family’s vet, Kristina Grewal, about what she does; Aubree is realizing it’s something she could be passionate about. “I want to be the person that not only helps someone with something they love so much, but also to help them make the right call. From being around animals so much you see people that don’t always make the right call.” She says she wants to be an advocate for the owner, and the animals. “I want to be someone that, if it is possible, fight right beside the owners or help them make the right decision.”

When asked about her personal heroes that inspire her to be her best, it was none other that mom and dad who came to mind. “They are two people that never give up even when the ‘going gets tough.’ They are two people that never give up on their dreams.” Her mother, Rachele Scobie, and her father, Mark Scobie, are both performance horse trainers and Aubree’s father also works for a wine capsule company. “They have taught me that winning isn’t everything, winning is the time you put into something, the blood, the sweat, the tears, the friends you gain and even the friends you lose. When you get to the show or rodeo you are just there to see how far you have come and how much further you have to go. That’s why they are my Heroes, they have taught me to always be happy with what you have accomplished.”

While she has plenty to be proud of, she says she has a lot of people to thank for her accomplishments. She says;  “I would like to thank my mom, Rachele Scobie, for introducing me to the show world and to Bobby Emmons, who gave me the opportunity to show Gameplan at my very first world show. I would also like to thank my dad for his support and the rest of my family for theirs. Lee, Ruth, and Taylor Dixon also deserve recognition for their support.”

Just from the short time I spoke to her, I can tell that Scobie has a good head on her shoulders. She is well rounded, passionate, and will go far wherever life takes her. I can’t wait to see what else she will bring to the table. Being so young, and already being so successful, I can’t help but think this is just the beginning for Aubree Scobie.