Growing up, every little girl goes through a phase where she wants a horse of her very own. For some, it’s merely a phase. But for others, that desire stays with them throughout their lives. Some people don’t get to fulfil their dreams for whatever reason, but celebrities have the financial stability and freedom that they need to do what they please. It’s not just country stars, but celebrities from Madonna to Johnny Depp have found their passion alongside their horses. I took a look at a few celebrities that are living the equestrian dream. 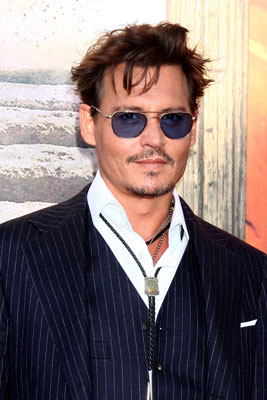 As a young boy, Johnny Depp had aspirations to be a rock musician. As he got older, he started appearing in films. As his career progressed it was clear that he is a passionate and dedicated actor. He has played many eccentric characters, and he has been in many movies over the years. His talent for playing strange roles so well are part of what makes him such a great actor. If you watch carefully in a lot of his action movies, he rides pretty well when it comes to horse back. That’s no coincidence.

Depp has always loved horses. In fact, he bought his mother a horse farm in Kentucky in 1985. Later, Johnny had a real connection with his equine co-star in the 2013 movie The Lone Ranger. The horse, Goldeneye was called Gunpowder in the movie. Johnny was so attached to the horse in the end that Depp adopted Goldeneye when filming was over. 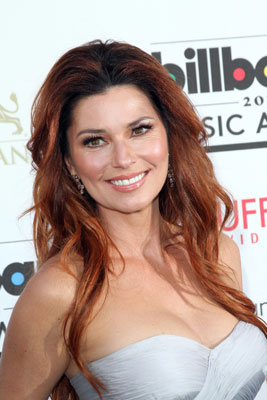 Better known as a 90’s country singer, Shania is also a proud horse owner. One of her dreams has always been to find a way to combine her love for music and horses. It’s finally happening! Horses have appeared in her videos and now, her stage show in Vegas, Shania Twain: Still The One, is all about horses. Click here to see a video from HRTV: 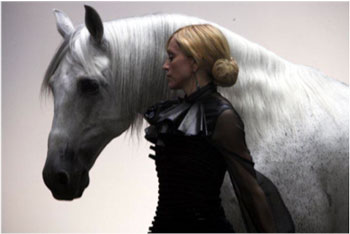 Madonna leads a legendary music career. When she’s out of the spotlight and off stage, she’s home. She likes to ride horses as an escape from her crazy life. In 2005 she suffered from minor injuries and bruises while riding in the New York Hamptons.The horse threw her off after being startled by paparazzi. Madonna had three cracked ribs and broke her collarbone in the accident. However, one little spill hasn’t stopped her from riding. 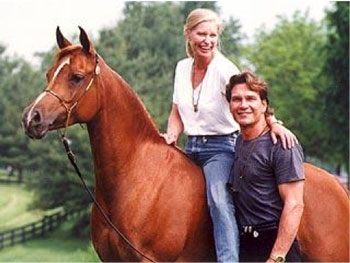 The “Dirty Dancing” star, Patrick Swayze was a talented, and well known actor. For most, that is how they remember them, but to the Arabian horse community, they remember him as a “famous family member”. Swayze loved Arabian horses. Him and his wife, Lisa, attended many horse shows and owned Arabian horses of their own. Although he did compete, it was clear he was never in it to win ribbons. One thing he treasured most about working with his horses was working as a team. According to sources he was always humble about the horseman that he truly was. When the superstar life got to be too much, Patrick and Lisa’s favorite thing was to retreat to their California ranch and their horses.

Brad Pitt bought his wife Angelina Jolie and himself a horse, he also surprised their six kids with ponies of their very own back in 2011. He realizes it will take a lot of time to teach the kids and train the horses, but he thinks it will be well worth it. The famous couple hopes to get the kids into riding young so they can take them “pony trekking” as a family. 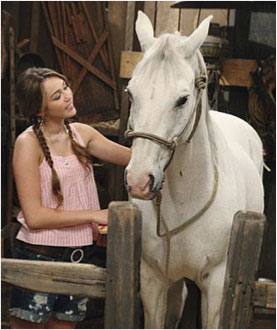 More recently, the only talk about Miley and horses is of the image of her mounted on a white horse; topless, wearing a long, dark wig. This was released as the cover art for the remix of one of her latest singles ‘Adore You’. But when Miley was growing up, she rode horses all the time. Including her horse, Blue Jeans, that was featured in the show Hannah Montana and Hannah Montana the Movie. 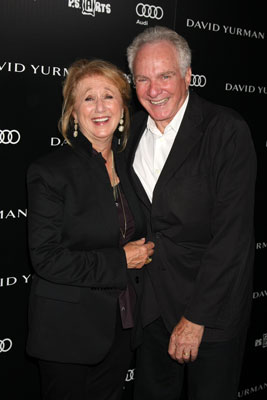 David Yurman is a prestigious jeweler that found his talent at the young age of 16 years old. Around the same time, he was learning to ride english with his dad. He enjoyed dressing like a proper english horseman. He stopped riding around 18 years old and then when he was in his twenties, he got into the jewelry business. He overheard a group of coworkers talking about trail rides and decided that it was something he wanted to get back into. Now, he still shows reining horses. He said the analogy of “willingly guiding” can be applied every day in life. He uses it with his son, and he uses it with customers.

There are many more celebrities that own horses, some may even surprise you. Whether they ride or just own them, in some way or another they are living their version of the equestrian dream. Leave it to horses to bring out the little girl in all of us!