Your choice of bit for your horse is very important and even the slightest changes in the style / type you use can mean a world of difference to your horse and the fun you have when riding.

I’ve always been a fan of Myler bits but have also been a little hesitant about ponying up close to $100 for a bit, especially when my $15 tack swap bit does just fine. I got the chance to purchase one used at about half off, so I decided to give it a whirl. I enlisted Nikki to help me set up an official test course and watch me from the ground to give me an overall picture of how things were going. The results? Magical! Here’s how it went.

The Set Up
Soleil, my horse and loyal test subject, is the perfect horse to test on because she’s insanely light and sensitive in the bridal. She was started by the amazing Jamie Hernandez of Varian Arabians who’s known for his light touch and ability to ‘float’ up on a horse to ride them. 13 years later she still responds to a feather touch. We’ve had her in a simple snaffle for pretty much the entire time we’ve had her as the movement and flexibility seems to work well against her usually-high headset. 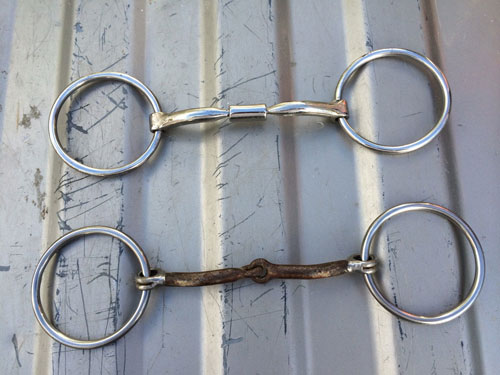 The bits we tested were my usual, a Reinsman loose ring snaffle with a sweet iron mouth and the Myler – a loose ring three-piece with their bespoke bearing jointed mouthpiece in a level 1 with copper inlay.

For the test course, we used our round pen as it’s provides the horse with less distractions with its solid walls. We then set three cones in the center to test tight quarters bending and turning. The test course would be as follows: walk 3 laps around, come in and weave all cones twice in both directions, back out for a three quarters lap, in to the center cone, then back four steps. Pretty simple course, yet allows you to really test responsiveness, different levels of pressure, and bend.

Please note, this course was devised after our original plan of a ‘blind’ test where I would ride on the rail blindfolded and try each bit without knowing which was being used, to see if I could feel the difference. However, after getting pretty dizzy, we decided a small testing course was a better choice.

The Test
We started in the Reinsman snaffle, my usual, and all went as expected. Soleil was slightly too upright in her headset, was fast at the walk, and a little too distracted by whats in her mouth to connect her brain to her feet. 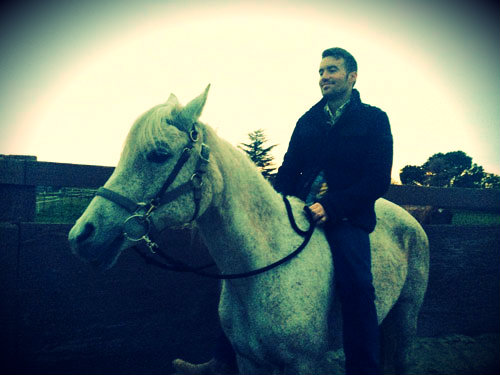 Weaving through the cones was very typical as well, she lacked responsiveness on the first pass, but then fell into sync with the other few passes. Consistency in distance from the cones has always been a struggle for the both of us and today was no different but her end turns we’re fluid and tight. Back to the rail. Stopping at the cone was normal as well with a small delay before the stop and four slightly right steps back.

All in all, it was pretty much every other time we’ve ridden.

On to the Myler… Nikki changed bits as I we stood in the center. Once she was set, it was off to the rail for our three laps. It was obvious in the first two steps that I would own this bit. Soleil was instantly more relaxed with a slower walk and a lower headset. As we turned into cones for the weaving portion of the test Soleil turned with beautiful bend and glided through the clones with ease and consistency. Coming to the final cone after our 3/4 lap, her stop was easier and quicker, and our four steps back we’re straight in line, with a nice headset.

The Decision
Hopefully it’s obvious that I chose to change up to the Myler. With this test, we discovered that Soleil wasn’t a fan of the palate pressure offered by a traditional snaffle and it caused her to be slightly irritated and distracted. With the way the Myler mouthpiece lays flat over the tongue, it eliminated that palate pressure, while keeping a similar lateral movement over the tongue & bars. Soleil has always appreciated the gag & freedom of movement that a loose ring allows, so it was nice to keep that part consistent.

As we’ve said, the style of bit can mean everything. Simply changing the mouthpiece of a loose ring snaffle made a significant difference in my ride with Soleil. I challenge you all to experiment and find the best bit for your horse.

Have you tried tests like this before? Tell us in the comments.

Want to find the Myler bit that works for your horse? Check out the selection at Riding Warehouse.