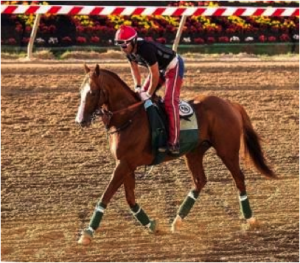 California Chrome- He’s the horse that everyone’s been talking about! Not only is this American Thoroughbred racehorse one of only 3 CA bred horses to ever win the Kentucky Derby. In addition to the 2014 Derby, and he has continued his winning streak by capturing the 2014 Preakness Stakes, along with 6 other races, including the Santa Anita Derby and the San Felipe Stakes. The only other horses to have previously won both the Santa Anita Derby and the Kentucky Derby were I’ll Have Another, Sunday Silence, Winning Colors, Affirmed, and Majestic Prince. This begs the question, is California Chrome on his way to being the first horse in 36 years to win the triple crown?

One of only 3 California bred horses ever to win the Kentucky Derby.

As impressive as his success is, that’s not the only reason this horse peaks our interests. From birth his handlers could see his potential. When he was first born, he was relatively large for the average foal; weighing in at 137 pounds. Perry Martin described his first impression of the young foal and said he was “Running circles around mama” within two hours of birth. Ever since he was young he has always been friendly. Due to his size at birth, his mother, Love the Chase, suffered a uterine laceration and was stall-bound for a month of treatment. Because of the unique situation that gave him much more human exposure, he really bonded to his caregivers while they cared for his dam. As a result of the extra care, California Chrome became very people focused, which has served him well through training. 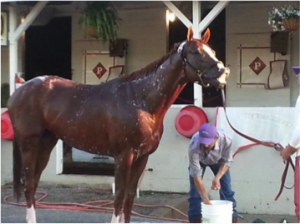 Among other qualities, his personality seems to be the most intriguing. He has been described as “being noted to for certain idiosyncrasies”. For instance, he is curious about everything around him, and even enjoys posing for cameras. Some joke that he even smiles! Another interesting behavior is his tendency to back out of the vans, where as normally horses will walk out. He also has a preference for a certain brand of cookies. However, some of his quirks start to concern people backing the racehorse. He has been slow out of the gate, he gets impatient when he has to wait too long, and he has expressed anxiety in past races; rocking from side to side preventing him from getting a straight shot out when the gate opens. 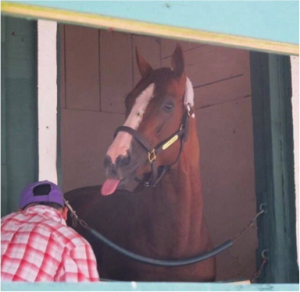 Chrome had a close call when conflict arose regarding his use of a “Nasalgate”. There is technically no ban on the nasal strips, but the trainers were notified that he wouldn’t be able to wear them for the Belmont Stakes unless previously requested. Later on, it was released that an official request has been submitted for permission to wear the strips, and California Chrome is now in the clear to use his strips at Belmont. This will be the race to determine whether or not he will win the triple crown!

The locally bred horse has everyone at the edge of their seat, we can’t wait to see if he continues his winning streak.