We all get so caught up in living our daily lives, that we sometimes forget to stop and think about things like “end of life preparations” or the dignity and honor associated with this transition.  For animals, just as for humans, the “end of life” transition can happen abruptly or it can be something that we see coming for a while down that dusty road of life.  Seeing beyond our grief and that sudden surge of loss, is difficult, but what comes next is possibly the most important aspect of this troubling time – respect, honor and dignity for all creatures.

Kevin Overbey defines his purpose as Eden Memorial’s Facility and Operations Manager as just that – respecting, honoring and providing dignity to all creatures.  “It’s why I’m here,” he humbly says.

After spending 25 years in the tele-communications industry, and traveling across most of North and South America, Kevin retired five years ago to live a quieter life.  He took on a job as grounds keeper at the Los Osos Cemetery.  His job there grew into being the Crematory Operator.  Kevin was comfortable in Los Osos, as that is where he grew up, showing his Quarter Horse in Western Pleasure.  His mother, JoAnn Overbey, is a local 4-H Leader, Mid-State Fair organizer.

Three years ago, Keven traveled to Kaui, Hawaii with his mother and his girlfriend, Bonnie.  “We were on a tour to explore irrigated canals.  We were asked where we were from, and when we replied ‘Los Osos, California’ we heard a lady chuckle.  The lady was Christine from Eden Memorial Pet Care, who was enjoying the tour with her kids!” Kevin exclaimed.  As it turned out, Christine used to take riding lessons from Sally Overbey, Kevin’s step-mother, on her Paint horse as a youngster. Kevin would spend the summer in Templeton with his Dad and Step-mom so the families already had a connection.

Maybe it’s just a small world, or maybe certain things are just meant to be, but after the tour, the two groups planned a picnic, and in the course of conversation, Christine learned about Kevin’s “after retirement career” and Kevin learned about Eden Memorial Pet Care.  “I had no idea there was a crematory for animals,” Keven admitted.

Thirty-five years had passed between the riding lessons Christine had taken from Kevin’s step-mother as a child, and this chance meeting on a tour in Kaui.  Three months later, Christine offered Kevin the position of Facility and Operations Manager of Eden Memorial Pet Care.  Kevin has enjoyed this role for the last year and a half.

Kevin truly enjoys his quieter lifestyle, but what he really relishes in is the opportunity to help people with the “after life care” of their special animals.  People become attached to their animals to the point of thinking of them as part of the family, and when a family member passes, it’s devastating, shocking and a time when a strong and kind helping hand is needed.  “It’s wonderful to take a breath and do a good thing for people,” Kevin explains, as he describes his position.

Kevin’s dog “Bonnie” comes with him to work every day.  Clients find interacting with Bonnie comforting, almost as though she is a four-legged bereavement counselor.  Bonnie, a hunting dog, came into Kevin’s care a few years ago from a friend, and took to her new role quite easily.  “She helps people in their time of need,” Kevin explained.

All the walk-in clients, and people who call looking for assistance with their pets, talk directly with Kevin.  He also oversees all of the cremations, is responsible for quality control and making sure that everything they do is compliant with local laws.  Additionally, he takes on that extra special role of going the extra mile to make sure that all animals are handled with dignity, honor and respect, whether great or small.  “We offer services to all animals, from goldfish to horses,” Kevin says.

“I’m a pretty simple guy,” Kevin says, humbly, when asked about his hobbies and interests.  “I enjoy riding my Harley with my girlfriend, Bonnie (yes, she shares a name with his beloved dog).  I love my job and living life on the Central Coast.”

“Eden is a very family oriented business.  They are amazing people,” Kevin says.  Being a part of this “family” has been a blessing in his life, and he enjoys passing on what he can in helping people understand the circle of life and treating all creatures with respect, honor and dignity.

If you find yourself in the position of needing to make after life arrangements for that special, non-human family member, or you simply want to plan ahead so that things aren’t as difficult when the time does come, contact Eden Memorial Pet Care – you will be in good hands, as will your precious pet. 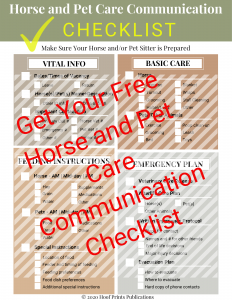 How will you communicate for your animals when you leave town? The Horse and Pet Care Communication Checklist enables you to gather all the vital information you need to communicate all the elements of all your animals’ care to your pet sitter. What if you suddenly had to leave town? Would you be ready for someone to quickly step in and take care of your animals? What if something happened to your horse or pet while you were away? Would your pet sitter know your wishes? This checklist will help you prepare your pet sitter to care for your animals the way you do. Get your Horse and Pet Care Free Checklist here >.

Written By
Sharon Jantzen
More from Sharon Jantzen
The first workday is scheduled and fundraising has enabled the purchase of...
Read More