We’ve all had them…  Those times when despite our best laid plans, things happen that throw us into a minor crisis mode.  It’s especially interesting when these little “hiccups” happen during a horse show that that we’ve been preparing for with dedicated intensity for months.

This week I caught up with a few local riders who had a few “horse show hiccups” to share that will surely brighten your day, and maybe even give you a little insight into how you can better prepare the next time that you head off to the showgrounds.

“I usually take my Half Arabian gelding to about 5 shows per year, and all of them are at least 3 days.  Of course, that means travel, hotel, stalls, and at least a day’s worth of frustrated packing!  A few years back, I was showing in Burbank.  We got there early, got my gelding out of the trailer and set up in his stall, and then went about setting up my tack room.  About an hour later, I decided to give my boy a little warm up ride and that’s when I realized I hadn’t brought my saddle!  Can you believe it?  I was at a horse show with no saddle.  I don’t know how it happened because I always check and recheck everything before leaving for a show, but there I was 4 hours from home with nothing but a saddle pad to ride my horse.  I broke down into tears.  My husband went into damage control mode while I sat in front of the stall sobbing.  He went around to about three of the big trainers who were stalled nearby and explained the situation until someone took pity on us and loaned us an extra saddle.  It wasn’t as nice as my show saddle, but at least I had something to use.  Things turned out well, and I placed nicely in my classes.  I profusely thanked the trainer who loaned me the saddle, of course, and now I have a checklist printed and taped on the inside of my horse trailer door with all of the essentials listed – “SADDLE” is at the top of the list!”

“I’ve been showing for 20 years in everything from breed shows to rodeo.  It’s been a great part of my life, and I’ve had more than my share of bad things happen.  One time that stands out was back about 10 years ago.  I was riding a young snaffle bit mare in a Reined Cowhorse class.  She was talented and handy, but still a little on the squirrely side.  We were coming down the fence after a cow, and as she came to a quick stop to turn back the cow, my stirrup broke.  I nearly went off the side.  As my weight shifted and I grabbed for a handful of mane, the mare humped up her back and started to crow-hop.  I was hanging on to that horse for dear life, and she took me all the way around the arena, jumping this way and that, stopping, hopping and doing everything she could to get me off.  Eventually I ended up somewhere on her neck and was able to steer her into the corner before sliding off.  I landed on my feet, the mare stopped, and the entire crowd was cheering.  That’s the most applause I’ve ever gotten riding!  My advice, check and recheck your equipment before a class…I looked later and realized that my saddle really should have been taken to a repair shop for some rigging work before the show, and it was afterwards!”

“Horse shows are one of the most important things in my life.  I know that sounds strange, but I live a pretty fast paced life and they give me something to prepare and look forward to.  I’m lucky to have met a few great friends over the years, and we travel and show together as often as possible.  Last year, one of these friends and I traveled to together for a show.  She brought her chestnut mare and I brought my chestnut gelding.  We both show Hunters and everyone always jokes how our horses look like twins.  Anyway, this particular show was a mess; there were class delays, the weather was bad, the horses we both acting really fresh and I was stressed to the max.  Before my last class of the show, I was getting my horse ready.  I had the saddle and bridle on, I was dressed, and I went to swing my leg over and get into the saddle when my friend walked up the aisle.  She started giggling and I wasn’t in a great mood, so I sort of snapped at her with something like, “What?”.  Her response was “So you decided to go with the mare, huh?”.  It took me a minute, but I realized that I had gotten her horse out and tacked her up instead of mine!  I claim horse show mania on that one.”

“Over the years, I’ve had a few hiccups of my own when it comes to horse shows.  From missing classes due to scheduling errors, my horse unlatching her stall door and taking a walk down the barn aisle, show clothes forgotten at home, and even a bad case of food poisoning that had me riding a pattern only to jump off right afterwards and throw up in the warm up arena.  Last year, I was showing the Region 2 Arabian and Half Arabian Championships in Santa Barbara.  I was standing at the gate, on deck, before my championship Reining class.  The person before me had just gone into the ring, so I decided to get my mare moving a little bit before it was our turn to go in.  I laid the reins across her neck and felt half of the bridle swing up towards me.  Yep, there I was, standing at the in-gate 5 minutes before my class and my bit had actually broken in half at the port!  My mare just turned her head around – with nothing in her mouth – and looked at me as if to say, “What’s the problem?”.  My mom and dad, who are my horse show heroes, jumped into action.  My dad sprinted all the way across the showgrounds to grab my back-up bit from the tack room while my mom talked with the Ring Stewart.  They were calling my number by the time my dad got back.  We threw the bit onto my headstall (using a quarter to tighten those pesky “ screws”), I jumped into the saddle and went in for my class with seconds to spare.  Despite no time to warm up and my heart racing from the stress, I somehow managed to remember my pattern and give a good showing…I got Reserve Champion!” 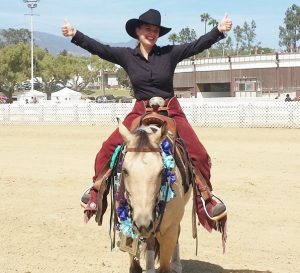 Remember, everyone who shows horses is bound to run into a few “hiccups” from time to time.  The important thing is that you prepare for the unexpected, deal with things as they come and realize that you just have to take things in stride.  Ride on my friends!