Well-known Colorado based horseman, Mark Rashid (www.MarkRashid.com) led a three-day clinic on High Mountain Road in Arroyo Grande this week.  The clinic held at the ranch of Anita Parra included participants from as far away as British Columbia and others who simply walked their horse across the meadow from the ranch next door. Attendees came with wide a range of challenges and concerns that they hoped would be resolved through three days of one-on-one sessions with Rashid.

Participants included a former competitive equestrian re-learning to ride again after recovering from a broken pelvis suffered in a non-horse related accident.  A teenaged boy and his grandfather worked on calming their skittish, untrusting mare. A 20-year-old Arabian who hadn’t been handled in 18 years and her owner learned effective groundwork. Rashid told observers that had his wife been with him, she would want to take the sweet mare back to Colorado. “Just what we need, another horse”, Rashid joked as he lovingly stroked her neck.

Rashid’s humor, calm manner and easygoing disposition compliment his technique and philosophy for working with horses.  “Considering the Horse” a title of one of Rashid’s books, was a key message point to participants seeking improvement.

Rashid is one of several well-known trainers who travel to the Central Coast each year providing clinics.  The cost to participate in a series of one-on-one sessions over three days was $595.  The cost to audit/observe was $30 per day. 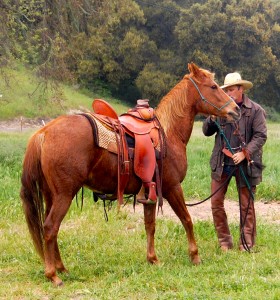 Written By
Beth Wonson
More from Beth Wonson
The vice president of a local company hesitantly entered the round pen...
Read More