Skill and compassion are at the forefront when choosing an equine veterinarian. As for Dr. Melissa Patten of River Grove Veterinary Services in Paso Robles, Ca, she has those qualities in spades! Dr. Patten and her brother were raised on the Central Coast by their parents who met by chance at a rodeo dance in Salinas. Both her mother and father had a desire to be around horses and worked until they got there by way of stall cleaning, catch riding, and good old fashioned hard work. Her father became a full time farrier and her mother, a skilled horsewoman. Her parents decided early on that animals were going to be an important part of raising their children. Dr. Patten says, “It was always drilled [into] us that animals were a privilege and they depend on us, so as long as we took care of our animals we got to keep them.” It’s early teachings such as this that helped to instill a deep love and respect of animals into both children.

Every foal I help come into this world is someone’s dream, whether it’s a dream of a futurity winner, a trail horse or keeping a certain bloodline around. It is very satisfying to be in a profession that I can help people live out those dreams. 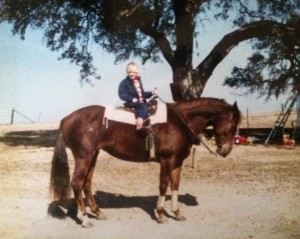 Dr. Patten started participating in local shows beginning at age 3 in Leadline Classes. She still has the first belt buckle she won for High Point 6 & Under at the Templeton Livestock Arena. “My parents still joke that when I was a baby the only way to get me to fall asleep was to go on a horse ride. If I wasn’t going down for a nap, they would saddle up and go on a little trail ride.” Dr. Patten credits her two childhood horses, Sugar and Bear, with helping her learn early on, just how much she loved horses. “Sugar was about as bomb proof as they get and she truly loved us kids unconditionally. Some horses are just made to be baby sitters and Sugar was my favorite baby sitter. Bear taught me a lot, the most important lesson was that a horse’s trust has to be earned and once it is that horse will do anything for you.” 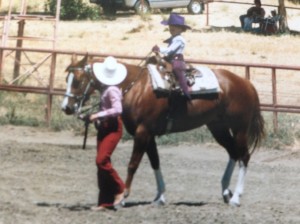 Trail riding and lead line eventually grew into 4-H shows and High School Rodeo and the idea that Dr. Patten wanted to be a racehorse jockey. Around this time, the realization that being a jockey might not work out due to height, Dr. Patten landed a job loping for cutting trainer Tim Stewart. Tim happened to introduce Dr. Patten to renowned veterinarian Dr. Jerry Black and the seed for veterinary medicine was planted after seeing several vets in action. “Being so close to animals I always felt horrible when they were sick or injured and admired the veterinarian who came to help them. [The veterinarian] always seemed to know the answer. Soon it became a dream that morphed into a mission.”

Dr. Patten chose Cal Poly – SLO for her undergraduate degree in Animal Science due to many of the hands-on programs such as Ranch Horse Enterprise, Escuela Cow-Calf Enterprise and the Equine Breeding Enterprise. Participating in all three, Dr. Patten found a home on the Equine Breeding Enterprise by doing the project as a student member and later as the leader of the project with co-leader and fellow Breeding Manager, Ellen Kim. Dr. Patten went on to a breeding internship at Valley Oak Ranch in Oakdale, Ca, once again crossing paths with mentor Dr. Jerry Black. Dr. Patten quickly realized that in order to continue to pursue this passion at the level she wanted, a degree in veterinary medicine was necessary.

Everybody encounters set-backs on the road to their dreams – if it was easy, everybody would do it! During her third year at Cal Poly, Dr. Patten was told by a professor not to apply for veterinary school. This feedback only gave her more reason to work even harder and she firmly set her mind to not letting go of her dream. Well, Dr. Patten attended Colorado State University, one of the most sought after vet schools in the U.S. today, and earned her Masters in Equine Reproduction in addition to her DVM. 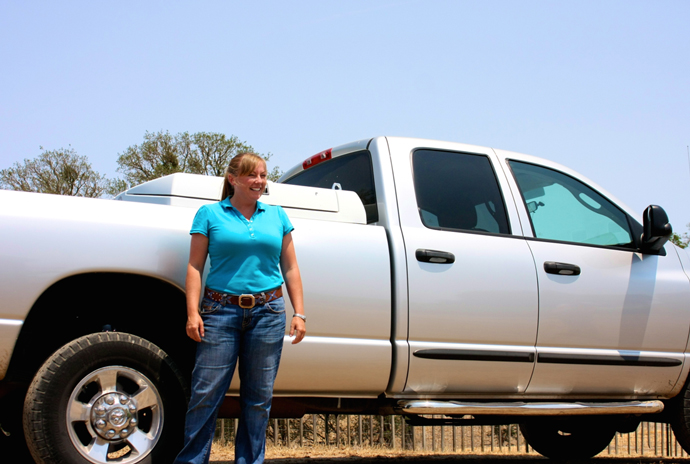 Even after grueling veterinary school, internships, externships and residencies, the practice of veterinary medicine presents heart-breaking difficulties at many turns. Such an instance occurred for Dr. Patten during her residency at Pioneer Equine Hospital in Oakdale, Ca. A young thoroughbred colt was admitted to the hospital and fought an ever vigilant illness for weeks. Through all his treatments, he retained his good spirit, as if he knew what the veterinary team was trying to do for him. Finally the decision was made to end his fight. “I will never forget this horse because he had the biggest heart I had ever been around and never gave up. As long as we were trying to help him, he gave it all he could to help us. He had this underlying grace under pressure and I would have given anything to be able to save him. But I learned a huge lesson. Sometimes you can’t fix the problem and no matter how much you don’t want to quit, it’s ok to let them go. He took a piece of my heart with him and I know he is up there winning races!”.

A Day in the Life

A typical day for Dr. Patten involves an early wake-up time to feed her horses and dogs alongside her husband Chad. The pair met in high school and have been together ever since. Through vet school, residency and the task of starting a business, Chad has been the rock for Dr. Patten to depend on, supportive counter-part and fellow animal lover – you may even meet him on a vet call as Dr. Patten’s veterinary technician! Then she packs her truck for the day and set’s out on appointments. During breeding season you will find her at Goforth Equine in Paso Robles most early mornings to palpate mares, order stallion semen, and perform embryo flushes. Since breeding is her passion, she’s developing something of a reputation as the “embryo whisperer” around North County. “Every foal I help come into this world is someone’s dream, whether it’s a dream of a futurity winner, a trail horse or keeping a certain bloodline around. It is very satisfying to be in a profession that I can help people live out those dreams.”. The rest of her day is comprised of equine dental exams, vaccinations, and general health exams, though you never know what might pop up on the schedule!

The main lessons I’ve learned from Dr. Patten is that hard work and natural talent will take you far in life. A compassionate heart and deep love of animals is something that is specific to animal lovers and veterinary medicine and when the two relationships meet – wonderful things happen. Mainly I’ve learned that every dream is worth pursuing. In her own words, Dr. Patten says,

Never give up your dreams. No matter what happens, what people say – there is always a way if you really want something.