What a pretty Paint horse… Owners of horses with patterned markings hear this all of the time. Indeed, most of the time, when someone sees a horse with flashy color patterns across their bodies, they rarely stop to question the breed; they are considered “Paints” by default. Pintos, though, have been organized by a distinct registry for more than 50 years in order to provide a place for owners of “patterned horses” of varying lineage and breeding to come together and celebrate their unique equine friends.

While there are several smaller color registries in existence, the Pinto Horse Association of America, or PtHA, is by far the most popular and strict in its practices for registry. Incorporated in 1956, their mission was to promote quality horses, ponies and miniatures with color, and to establish a registry where their lineage and competition records could be maintained. Today, there are more than 150,000 registered Pintos in the PtHA. 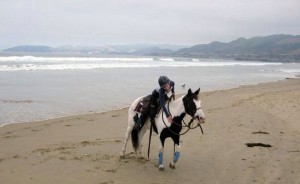 Historically, “pinto” patterns are rare in the wild. Of course, like anything else, humans have always had an eye for horses with interesting or unique colorations. Many native tribes and cultures specifically chose horses with rare coloration as breeding stock, and eventually, patterned horses became more common through selective breeding. Depictions of spotted horses have been unearthed in both Ancient Egypt, as well as on the Russian Steppes prior to the rise of the Roman Empire.

Most believe that the Spanish were the first culture to truly prize the patterned horse, and thus greatly influenced early numbers. In fact, the word “pinto” originates from the Spanish language, and is translated as “painted”, “dappled” or “spotted”. Pintos were prized by the Conquistadors, and thus made their way to the Americas. Many were either set free or escaped during the early exploration of the New World, and became quite popular with the Native Americans, who specifically attempted to preserve the coloration in their mounts. Europeans who immigrated to the Americans eventually began crossing their stock with the “wild” horses, and the Pinto became what it is today.

“The PtHA requires that a horse have at least 4 square inches of “cumulative white” in qualifying zones with pink skin beneath. “

So, what exactly is a Pinto? The PtHA requires that a horse have at least 4 square inches of “cumulative white” in qualifying zones with pink skin beneath. Any horse that meets this requirement, and is registered with an eligible outcross breed registry (such as Arabian, Saddlebred, Quarter Horse, etc.) with a colored pattern noted on their papers is eligible for registration. Horses that do not meet the “cumulative white” requirements, but who have at lest two other qualifying Pinto characteristics (blue eyes, white stockings above the knee, white or multi colored hooves, pink skin, etc.), and are registered with an approved outcross registry, are eligible for the PtHA Solid, or Breeding Stock, Registry, but are not allowed to participate in PtHA events unless specified by event rules. Mares and geldings with unregistered parents can be accepted into the PtHA based on color alone, so long as they meet all of the other requirements. No horses with Appaloosa, Mule or Draft breeding within the last four generations (or that exhibit traits specific to these breeds) are accepted into the PtHA.

“The Tobiano appears to be a white horse with colored markings while the Overo pattern is considered ‘everything other than Tobiano.'”

There are two basic color patterns recognized by the PtHA. The Overo and the Tobiano. The Tobiano appears to be a white horse with colored markings. They typically have large, flowing spots of color that originate from the head, chest and hindquarters, and often have markings that incorporate the tail. This is the most common type of Pinto, and originates from a single dominant gene, and thus all Tobiano’s have one parent that displays markings; there is also a DNA test for this pattern. The Overo appears to be a colored horse with white markings. Spots of white typically appear jagged, lacey or non-uniform, and originate on the horse’s side or belly and spread toward the neck, shoulders and back or hindquarters; white rarely crosses completely over the back. Markings vary greatly from horse to horse. Subsets of the Overo pattern include, Frame Overo, Sabino, Splashed White, Tovero and Dominant White. The Overo pattern is considered “everything other than Tobiano” by most Pinto enthusiasts; there is no specific DNA test for this pattern or its subsets, and occasionally a foal with this pattern is born to two solid parents. Color genetics can get quite intricate, and breeders often spend years crossing patterned horses to come up with a consistent, desirable result. 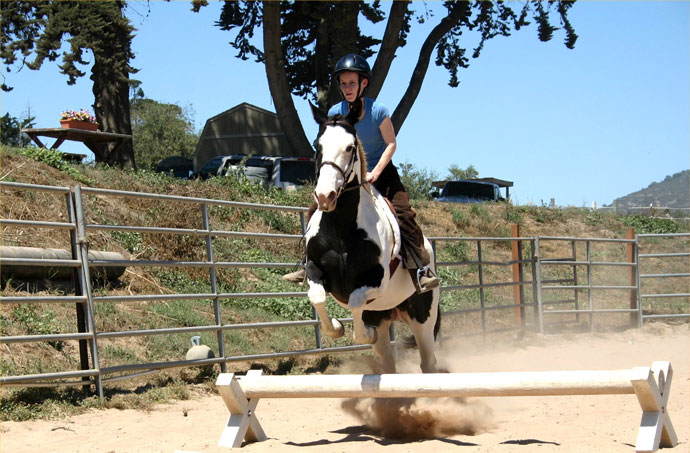 The Central Coast boasts a large variety of horses, so it was not difficult to find a “Pinto” lover for our featured spotlight equestrian. Kirsten Finberg of Arroyo Grande, is the owner and proprietor of Little Red Hen Bread (a staple at local farmer’s markets and several other area establishments). When she is not spending her time folding homemade bread dough and baking in her brick oven, Kirsten is spending time with her 5 year old, black and white, Pinto pony, “Gracie”.

I love my Pinto pony… She is the perfect horse for me!

Kirsten got her start as a youngster riding Hunters in Bakersfield. Life pulled her away from horses for some time, but several years ago, she felt the unmistakable “itch” that only horse lovers understand. At only 5 feet tall, Kirsten has always had a soft spot for ponies, and after leasing several horses in the area, she stumbled upon a 13.2 hand black and white beauty in need of a rider. In the beginning, Kirsten had no intention of purchasing a horse, but her husband surprised her with Gracie as a birthday gift, and the rest, as they say, is history.

At just under 3 years old, Gracie was fairly green when Kirsten acquired her. Over the last few years, and largely on her own, Kirsten has helped Gracie to become a solid little riding horse, even discovering that she has quite a talent for jumping. The two enjoy trail riding and arena time alike, and there is truly very little that this adorably perfect match of human and equine cannot accomplish together. “I love my Pinto pony,” Kirsten says, when talking about Gracie. “She is the perfect horse for me!”