Sometimes the one difference we make happens one at a time. This is how Monica O. Krause of United Mustangs of America, based in Arroyo Grande, makes a difference in the plight of the wild Mustangs. She adopts one mustang at a time. Her focus, as she states, is “using wild mustangs to teach horsemanship.”

Recognizing the Plight of the Wild Mustangs

Monica recognizes the plight of the wild Mustangs is a reflection of what is happening in our society. She ponders her observations regarding the wild mustangs, “We are industrializing the world and we are losing open space. If the Mustang loses its freedom, couldn’t the same thing happen to us?”

Monica has adopted and brought three mustangs from wild to mild (there is no such thing as a finished mustang). She also got a random draw and took a mustang to the 2015 Extreme Mustang Makeover where she took 8th place and receive the Rookie belt buckle. 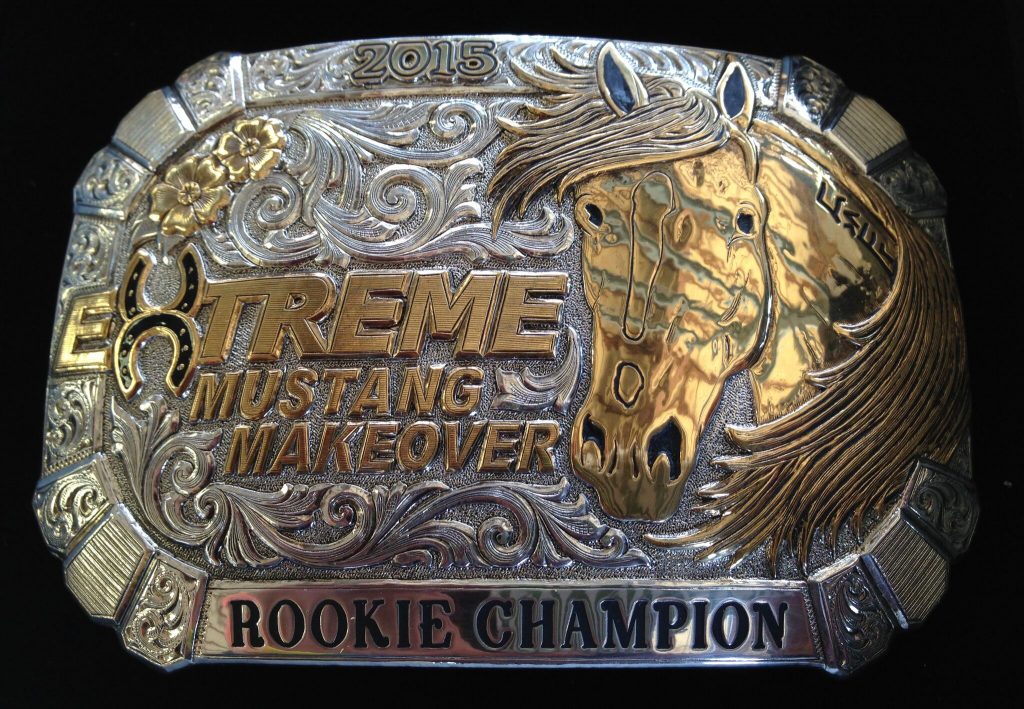 How Her Life with Wild Mustangs Got Started

Her development in getting to this place where she’s using wild Mustangs to teach horsemanship has been lifelong. She grew up in the San Fernando Valley and learned to ride at a Hunter Jumper barn from 9 to 13 years old. Monica rode her Thoroughbred, Teddy, in Hunter Jumper shows. When her family moved to the Central Coast they had more land enabling them to keep Teddy and a companion horse at home. “I knew how to ride, but I didn’t know how to care for the animal.” Monica soon realized she didn’t know how to keep a horse. It wasn’t long before she joined Pony Club where she learned that horsemanship is a vital part of horse ownership. 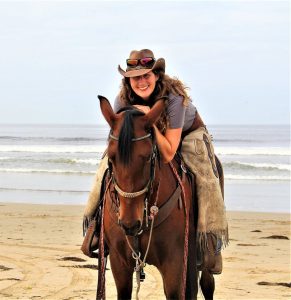 This realization has set her on her life passion. “Mustangs and horsemanship it is!” declares Monica. She was left horseless and heartbroken when her favored horse Teddy passed away. Her heart was still calling out to own a horse. Monica asked her father  – practically daily – for him to consider another horse to keep on his property. One day, as she approached her dad, his tune was different, “Would you like to have a wild horse?” her dad asked with an unusual gleam in his eye. With extreme excitement Monica did a little research into adopting a wild mustang and found herself the new “owner” of an 11-month old filly she called, “Juno”.

Juno was adopted through the BLM Wild Horse and Burro Adoption program in 2006. The program puts a one year hold on all adopters gaining title to the animal. Owners are given a year to prove they are worthy owners of the adopted animals. Monica says, “They do not want the horses going to slaughter or to become bucking stock in the rodeo.”

After seeing hundreds of these horses that needed homes, Monica realized she wanted to take complete ownership of Juno’s education. “My goal with her was to learn how to educate a horse to be ridden, which I had never done before. My experience with Juno has lead me to learn a lot about mustangs and horsemanship,” relates Monica.

Learning initially from her mentor, Robin Shen of Enlightened Horsemanship, Monica began to develop her own sense of horsemanship. She recognized the significant role it plays in confidence building, leadership, trust, communication and partnership. More recently, she was lucky to run into Janiece Johnson Wilson at the Extreme Mustang Makeover in Fort Worth, Texas. Instantly, Monica was captivated by the profound wisdom in horsemanship that Janiece has to share.  Janiece is also a certified Monte Foreman instructor, as she has enjoyed 20 years of instruction from the late and great master. Janiece’s influence in the horse world is impactful as she has taught and mentored numerous great horseman for 55 years on a national level specializing in teaching the science of riding and handling horses. 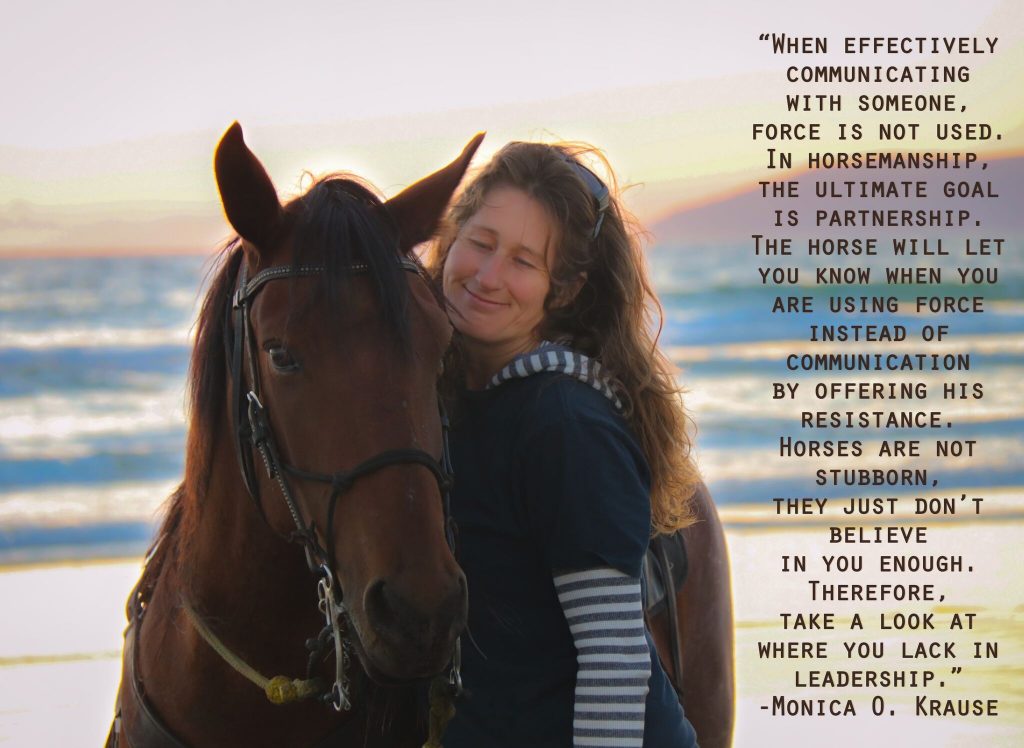 “I have learned a lot about myself,” Monica related. “This is not a dictatorship. It’s a conversation. The horse is our servant, but not our slave. We have to learn the nature of the wild mustang so that our influence will not cause him to go into resistance mode. It is our responsibility to conduct ourselves in a way so that he is able to fully comprehend our commands. In other words, it is up to us to work with him in a way that complies with the laws of his nature.” These lessons have birthed a desire in Monica to coach others in horsemanship using the gentling and educating of a wild mustang as the tool to teach the bigger lessons of life. She says, “Horsemanship is not about the horse at all, it is rather about self-mastery.”

Creating a culture of more horsemen is part of Monica’s “big picture” vision. “I want to reach people who are not already horse people. I am not here to simply put a good handle on other people’s horses. I’ll coach people how. I am about empowering horsemen to fully influence and enjoy their own horses, or any horse!”

Wild mustang handling can be broken down into two main strategies.

Lessons Learned Along the Way

Monica is really full of wisdom gained through working with now three wild mustangs. Here are a few of her lessons:

“The horse will show you if you are accomplishing your goal. I won’t have to tell you. Horses cannot lie.”

“Many people have issues because they are just too nice. There is no equality in the horse world. There is only above and below. Horses are always fighting for position. It’s about who gets to move whose feet. If the horse is moving your feet, that is where the first ingredient must come in, fear. He must fear you in order to respect you. The lead mare gets the horses to move by kicking or charging with her head down, ears back and teeth bared. Some people have a hard time with this because of their desire to be ‘nice’. However, this is not being “mean”, it’s called being assertive, standing up for yourself. I can tell a lot about a person when I see them work with a horse. If the horse is running them over, that person needs to learn to be more assertive in life or they are going to get hurt.”

Proud of Her Students

“I don’t want to be a trainer. I’m a coach,” states Monica. “I coach others to understand the nature of the horse, to develop trust and build a partnership. When we have that established, we can work through any problem.” 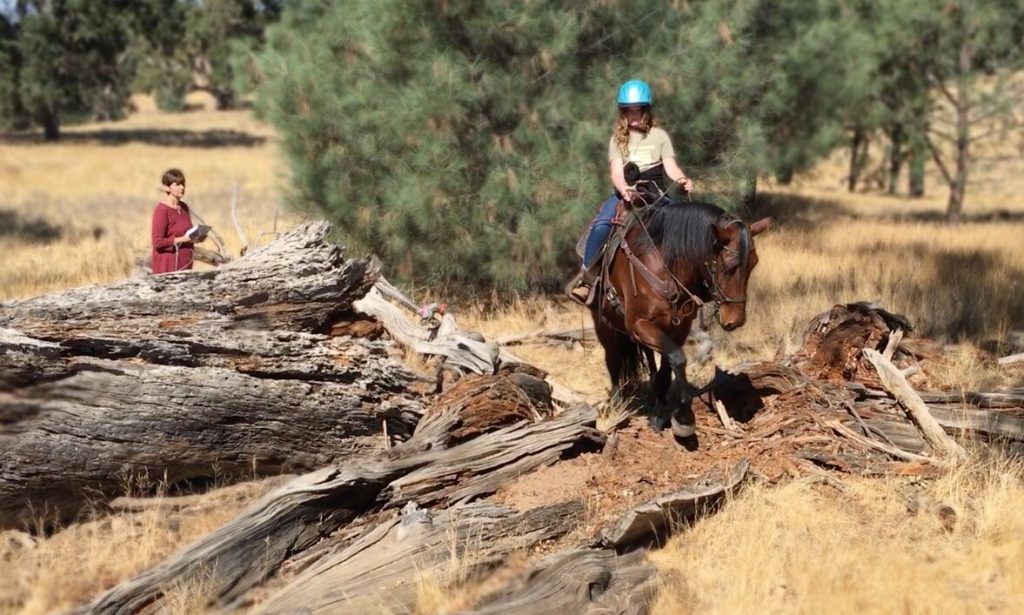 Recently, Monica and a young student took part in a Trail Trial. Her student had never competed in or heard of an event like this, yet found herself simply doing the maneuvers they work on during lessons. Her student earned 2nd place and three honorable mentions. “When my student’s do well it makes me smile!” exclaimed Monica.

Overall Monica loves, “seeing changes in mindset and behavior including overcoming challenges both in the horses and students.” 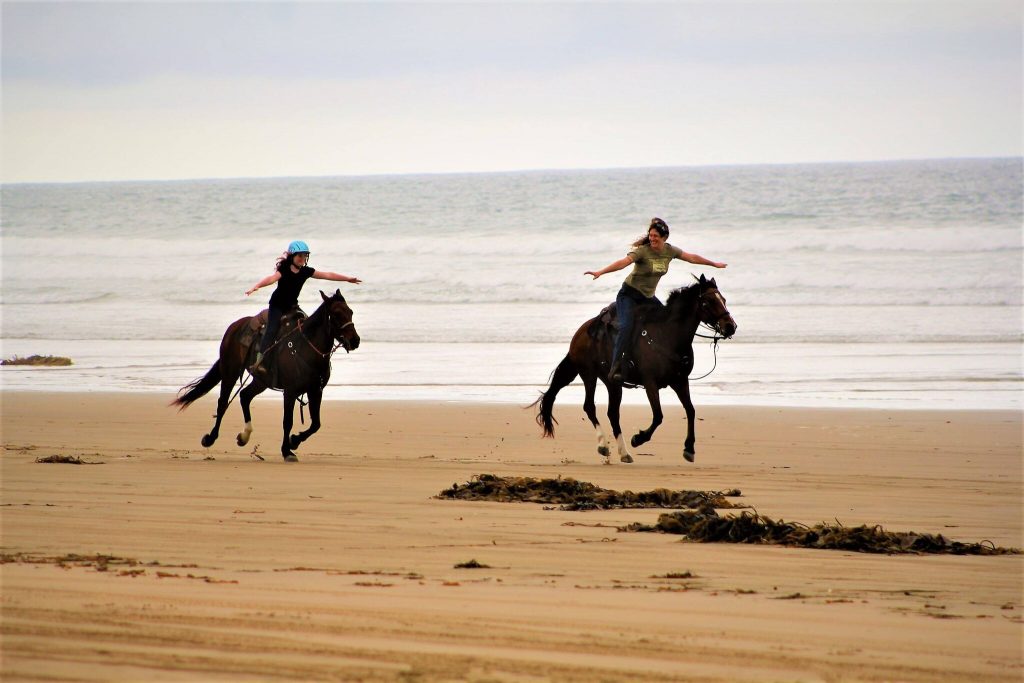 Monica’s big picture goal involves the development of a school where horses and horsemanship is the base of all learning. “I am working to build an environment which includes how to be better in life using horses as the common thread,” projects Monica.

“It has been a proven fact that the relationship between human and horse is a sacred bond. The rehabilitation programs for PTSD and also hippo therapy, for physical and mental development in humans has already been proven nationwide to be the most valuable thing that can be taught.”

Monica continues, “It is important to have people more knowledgeable about what it is that they are trying to do with their animals. Not only will they be better with their horse, they will be better around other people, with their children, with their spouse, and become better community leaders because they will have a proper attitude. The big picture goal is the development of common sense horse sense. Because when you get common sense horse sense, you get wisdom faster.”

Meanwhile, Monica is educating people about the plight of the wild mustang and putting them in the driver’s seat when it comes to handling a wild mustang through United Mustangs of America. She is available to help students understand their own horses, take an active role in the handling of a wild mustang, and assists people who want to adopt a wild mustang and learn to build partnership with it. Her horsemanship techniques apply to all horses.