What does this mean to horse owners? Let’s take a more in-depth look at the situation.

Just what is West Nile Virus?

“Encephalomyelitis is inflammation in the brain and/or spinal cord.” states the Merck Manual Pet Health Edition. “West Nile virus, the cause of West Nile encephalomyelitis, was first found in North America in 1999. This viral disease, transmitted primarily by mosquitoes, is characterized by central nervous system dysfunction and can be fatal or (if the horse survives) can result in prolonged signs of disease.”

How Does A Horse (or a Human) Get West Nile Virus? 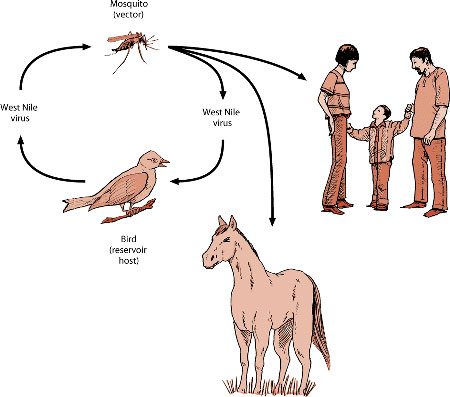 What Are The Symptoms?

We spoke with local vet Stacy Potter to find out the signs signs that a horse may be infected with WNV. She told us that “There may be a variety of clinical signs from very obvious ones of the horse become uncoordinated to more mild signs that exhibit more “flu-like” symptoms. These may include being depressed, off-feed, or not acting normal for that horse. Fever is (a normal temperature is 99-101) a common symptom of WNV but may also be seen in other viral or bacterial infections as well. In-coordination including tripping or falling or being down and unable to rise are more severe symptoms and need to be addressed immediately by your veterinarian. Other signs include weakness, muscle twitching, increased sensitivity to sound or touch, and grinding teeth to name a few. One important thing to consider is that these clinical signs may represent other diseases but regardless all require veterinarian attention. “

The good news is that the high season for the disease is June – September the other good news is that the virus has not shown up in dead birds in SLO County all year. Mosquito sampling in SLO County also has turned up with no WNV this year either. The number of horse cases in California has been on the decrease since the first cases in 2004. In 2013 13 horses tested positive in all of California compared with 504 horses in 2004. You can get up-to-date weekly info on the presence of WNV in SLO County at http://westnile.ca.gov/.

Most horses die of the disease if infected with WNV. Infected horses receive supportive treatment of the disease. About 1 in 150 cases in humans show symptoms that develop into a severe case which can result in death. For more information please read the SLO County fact sheet on WNV.

But don’t rest too easy, the following is an excerpt from “Fight the Bite”  and was dated September 3, 2014. “Dr. Ron Chapman, director of the California Department of Public Health (CDPH) and state health officer, is reminding Californians to remain vigilant against the threat of West Nile virus.

‘The proportion of mosquitoes infected with West Nile virus is at the highest level ever detected in California,” Chapman said. “Last week, 52 new human cases were reported to CDPH. We expect to see more people become infected as this is the time of year when the risk of infection is the highest.’

What Can a Horse Owner Do to Protect Against WNV?

First off get your horse vaccinated against West Nile Virus. Second protect yourself by keeping mosquito populations down by getting rid of standing water, fixing house screens, and wearing mosquito repellant when out where and when mosquitoes are prevalent.

“There are 4 currently licensed vaccinations available for West Nile Virus and vaccinations are effective in their claims.” Says Stacy Potter. “A vaccination claim may be simply that they decrease viremia, the development of encephalitis and clinical signs. So in this case the horse may contract the virus but never get sick from it. Whereas another companies available vaccination will have claims that include the prevention of the actual disease. All of the currently available vaccinations have show efficacy based on their clinical trials and all are tested to ensure that the duration the vaccination should be effective (duration of immunity) lasts for 1 year.”

There’s also another important benefit that may come from the vaccine manufacturer, depending on what vaccine you choose. “A second benefit is that, when administered by your veterinarian, most companies offer essentially a warranty if you horse gets sick. Depending on which disease it is they may help cover the cost of diagnostics while others will include treatment expenses as well but each vaccine company is different in how much they cover.” The companies that offer this protection only offer it when the vaccine has been administered by a vet because they know it’s been handled properly.

Stacy reminds us that all vaccines “should be placed in a cooler on ice even just for transport from the feed store to your house and kept refrigerated until used. Mishandling of vaccines can greatly decrease their effectiveness.”

Overall it looks like there is no reason to panic regarding West Nile Virus in SLO County, but horse owners who spend time outside especially at dawn or dusk must remain vigilant in protecting themselves from West Nile Virus. It also appears that although a horse was determined to have WNV in SLO County last month it is looks to be an isolated case. However, WNV is present in the majority of California Counties including two of our neighboring counties, Santa Barbara and Kern. More information at http://westnile.ca.gov/reports.php.