Have you ever looked back in time and realized that you unknowingly were in the midst of something unique and special that will never come your way again?

Local author Mike Knecht says, “Yes”. That realization spurred him on to write a book about a colorful group of cowboys on the Chimineas Ranch. “It was at Art Stienbeck’s funeral at the Santa Margarita Ranch that I looked around at all the people whose lives were impacted by Art, Pat and the other cowboys who worked on the Chimineas Ranch  and I realized I needed to tell these stories.”

As a young man Mike got to cowboy with a group of exceptional men who he describes as, “Educated, sophisticated, hard-working, cowboys whose dry wit demonstrated a love for the cowboy lifestyle.” Mike and his buddy David were the junior members of the ranching crew who roped cattle in the bush, trained and traded horses and worked long and hard days for several years on the Chimineas Ranch in .

Pat Russell, an imposing, observant cow boss with a huge presence was the catalyst behind this unique group of cowboys. Pat leased the Chimineas ranch and brought the most diverse and interesting group of men to work there ever assembled on a ranch. Good looking, college educated athletes who were drawn to the life and the humor of the situations they found themselves in.

”The most colorful experiences in my life came through knowing Pat and the boys on the Chimineas,” was how Mike put it.

Using off-the-track Thoroughbreds to catch wild cattle, then selling these horses at the polo fields was interesting if not life threatening work but the men who worked on the ranch made it a humorous adventure. Injuries were laughed at, skill was appreciated and a unique bond was formed between cowboys and horsemen who faced danger, hardships and responsibility with loyalty and humor.

“I tried to focus on the humor of the situation through the fires, the floods and run away horses. It wasn’t hard because the things that happened in this cowboy life were funny,” Mike says.

Tales from the Chimineas Ranch 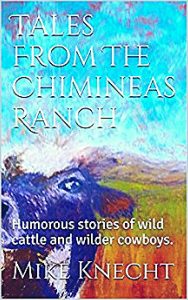 Step back in time with Mike and enjoy cowboy life as experienced in a remote ranch in the Eastern section of through the stories found in “Tales from the Chimineas Ranch“. The book can be picked up on Amazon for Kindle and Mike can be contacted through  mikeknechtauthor.com for print books.

Written By
Sharon Jantzen
More from Sharon Jantzen
The sensitive and accepting yet vulnerable and powerful nature of a horse...
Read More