A 10 minute warm-up then go be judged…seems a bit crazy? Most of you who show horses probably plan for more than a 10 minute warm-up before a course, test, pattern or class where you ride on your own, familiar horse. Intercollegiate Dressage Association (IDA) shows only allow a rider 10 minutes to warm-up a horse assigned through the draw out of a hat. This puts all riders on the same footing and provides a venue where horsemanship (not the fanciest horse) is rewarded. Keiko Eastman, a member of Cal Poly’s Dressage Team and the Introductory Champion for this show season explains how beneficial this experience is, “Practicing with a dressage team competitively and specifically within IDA has been a very interesting experience. The rules of IDA test your skills as a rider because it often means competing with a horse you have no prior relationship with. This has definitely challenged me in a new way that requires patience and the ability to be flexible with my prior training. I think this, in itself, and becoming sensitive to what needs to be done in such a short amount of time, is a very valuable quality in all practices of riding.” 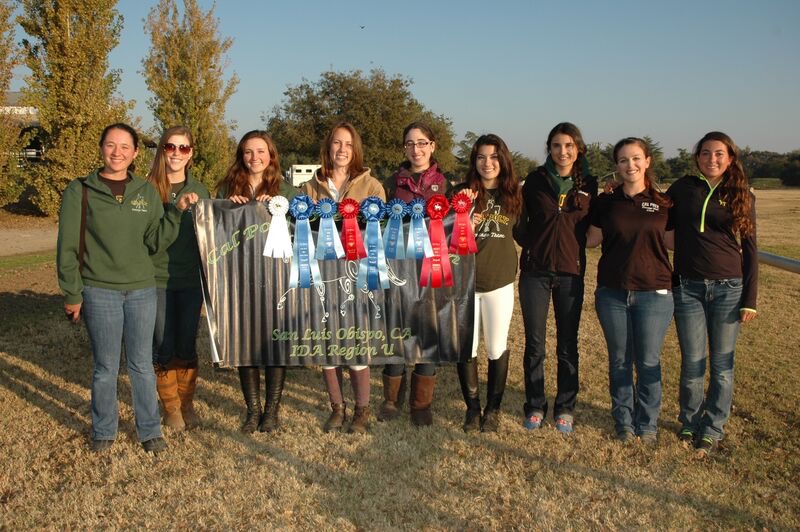 It’s true, Intercollegiate Dressage Show Team riders don’t use their own horses. The 10 minute warm-up follows the “Parade” where a warm-up rider rides the horse while the rider who drew the horse watches. “We look for how responsive the horse is to the aids and for its desire to move forward,” explained Suzanne Kritz, President of the Cal Poly Dressage Team in San Luis Obispo and show veteran, who continued, “We also look for the horse’s soft side and hard side and acceptance of the bit. Most donated horses have issues, also some of the warm-up riders don’t do a good job.” All these factors must be evaluated in a short period of time, before the rider who drew the horse gets on for her 10 minute warm-up and then rides a judged Dressage Test.

There are four levels ridden at an Intercollegiate Dressage Show, all using current United States Dressage Federation (USDF) tests and judged by a USDF Judge. The four levels are: Introductory which is a walk/trot test, Lower Training which is the first two tests of Training Level, the third and fourth tests make up Upper Training. The highest level is First Level which includes lengthenings and lateral movements. “We practice how to execute the test. The rider must know the test so she can focus on riding the horse. The test is always ridden from memory,” explained Suzanne. 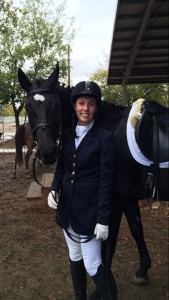 The Cal Poly Dressage Team has been busy competing this school year. There are three locations where two shows happen back-to-back between September and January in Region U where Cal Poly shows. Cal Poly San Luis Obispo hosts their two shows in October, UC Davis hosts two in November and Stanford has the last set of shows in January. Riders usually draw a different horse each day. Kelsey Hooper, a First Level team rider tells us about her draw at UC Davis. “My favorite draw horse was Dynah. I drew her on both days of the UC Davis show and she was a very pretty black mare. Even though we got off to a bit of a rough start with her galloping down the outside of the ring at the sound of the judge’s whistle, she was terrific in the show ring. I am very thankful for her because that weekend I got my highest mark in the show ring, a 74% which led us to win first place and high point for both show days! It was a really great and addicting feeling.”

The goal of every season is to qualify for Nationals. The journey starts in September when the coaches select a show team of six riders. At each show there will be four designated Team riders, one for each level and two Individual riders who serve as buffers to other teams. Sometimes the Individual riders are switched to be a Team rider to make the team more competitive. The Team members are listed before the draw. No matter who is on the final Team each day all six riders are part of the contribution. The point system is quite complicated, but basically each team is trying to gather as many points as possible. The team qualifying for Nationals is the team with the highest number of points in the season. This year the Cal Poly San Luis Obispo team of Amy McDonald, Kelsey Hooper, Keiko Eastman and Maggie McKitrick, qualified with a .5 differential over Stanford. Their student coach, Meghan Slaughter, has this to say about this group of riders, “All of the girls on the team are friendly, fun loving, and always respectful towards others. They’re exactly the kind of students that I’d want representing my university. Not only, that, but I think the riders on this team uniquely represent Cal Poly’s motto of ‘Learn by Doing’. Many of the girls on our team didn’t ride dressage before coming to Cal Poly, or only did it infrequently. When they joined the team, they jumped headfirst at the chance to learn new skills. Coincidentally, all of our show team members this year are Animal Sciences majors, so these skills with horses can also benefit their academic careers.” 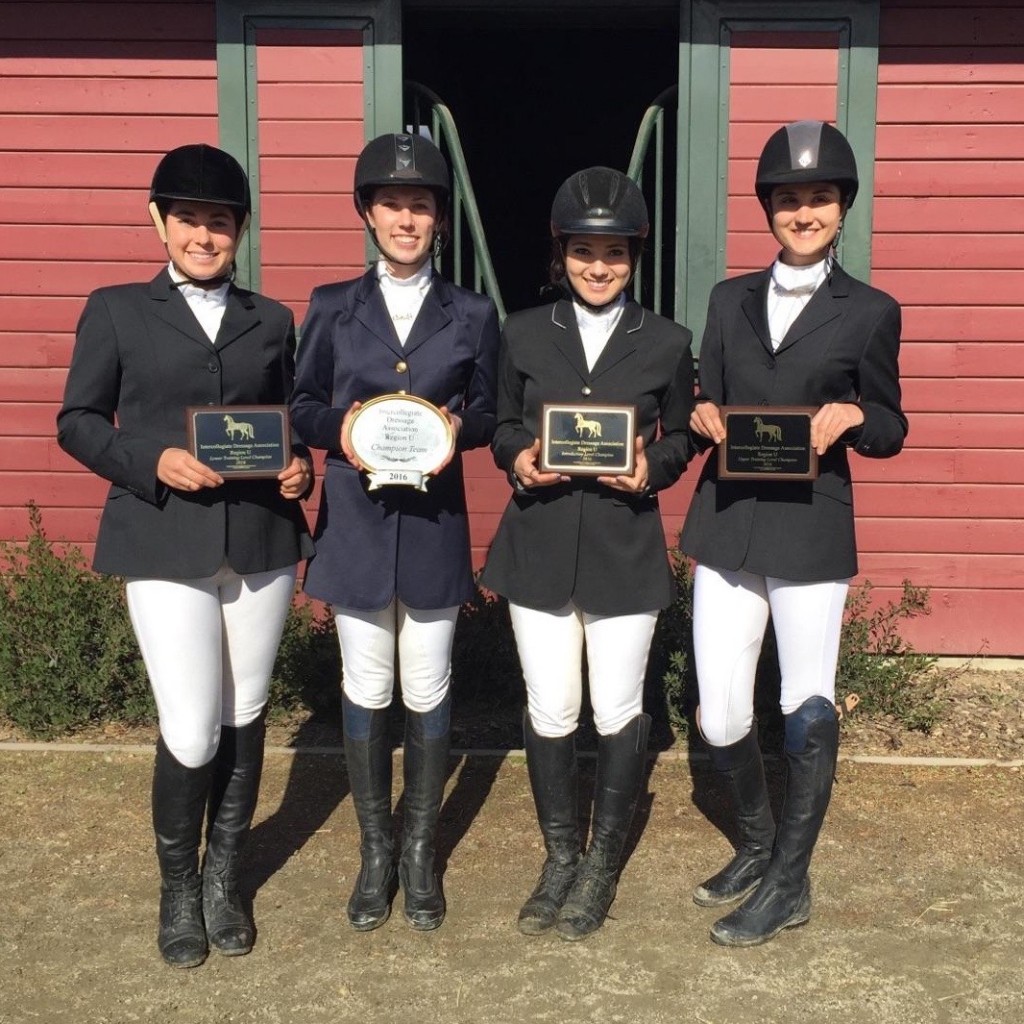 Centenary College in New Jersey is the venue for this year’s Nationals. These four riders, along with two coaches, will compete April 23 and 24. The team is excited to represent Cal Poly and show on a National level. Maggie McKitrick, Upper Training Level Champion, will be showing at the Nationals for her third year, “This year at nationals, I will approach the show much more competitively. As a freshman showing at Intro level, I had no idea how brilliant of an opportunity I had gotten myself into. As time has passed, I have grown much more passionate about dressage, and understand how meaningful this competition is. I will practice my tests as much as I can, and bring my best riding to the competition.” Since Maggie has been to the Nationals several times she helps us understand just how important this competition is, “Nationals is such a big deal because every person competing has worked so hard to get to where they are. In our Intercollegiate Dressage Association, each person showing has competed through a whole season of shows, and practiced every week to make their way to the top. Receiving a place at the National level means so much more than just a ribbon; it’s really a qualification.”

The heart of this type competition is to make showing horses in Dressage available and affordable to the college rider. Since the riders don’t use their own horses the showing is cheaper and more available to the average rider who may not have the time, horse or resources to compete in the regular show world, yet the experience gained is very valuable in developing the rider. Amy McDonald, Lower Training Champion, gives us insight into how she has developed as a rider. “I didn’t have much prior experience with Dressage, but I have been riding since I was five. I wanted to learn a new discipline and make new friends when I started school at Cal Poly, so I joined the dressage team. I didn’t show at all my freshman year, but I consistently went to practice and learned about dressage from the coaches. Last year was my first year competing in IDA at Intro, then this year, I moved up and competed at Lower Training.”

The Need For Funding

Although showing through Intercollegiate Dressage Association is cheaper there are still expenses. Most of these are met through the club, or split between the riders, but going to Nationals is a bigger endeavor. The Cal Poly Dressage Team is looking for help in getting them to New Jersey in April. Sara Robinow, Alumni Coach, tells us about the Cal Poly team funding, “Qualifying for Nationals is a big deal because we have worked so hard for it! Our team is entirely student run, and mostly funded through donations.  We are one of the only competitive teams in our region that does not have a professional coach or a permanent dressage court. Everything this team has accomplished they have worked for, and to be the most successful team in our region this year is a great reward! Dressage is not well known in this area, yet this team has managed to excel at it. We are excited to represent Cal Poly at a national level and hopefully become a respected establishment in IDA as well as in our community,” Sara continued, “We are entirely student run and funded mostly through donations.  Our horses and tack have all been donated by generous members of our community.  We could not exist without the support of family, friends, and alumni, and we are always looking for ways to be present in the local dressage community.  If there are any trainers, riders or dressage enthusiasts looking to become more involved in Intercollegiate Dressage we would love to meet them. If there are any local events that we could assist with or participate in we would love that as well. We want to be present in the community both to promote Intercollegiate Dressage and to support dressage in our local community.”

So the next time you are warming up for your next event, be thinking of the limited 10 minute warm-up these riders get – riding an unfamiliar horse – before entering the Dressage arena. These riders have grown in their riding abilities, gained insight into horse training, made new friends and enjoyed success. Let’s help get the Cal Poly Dressage Team to the Nationals! 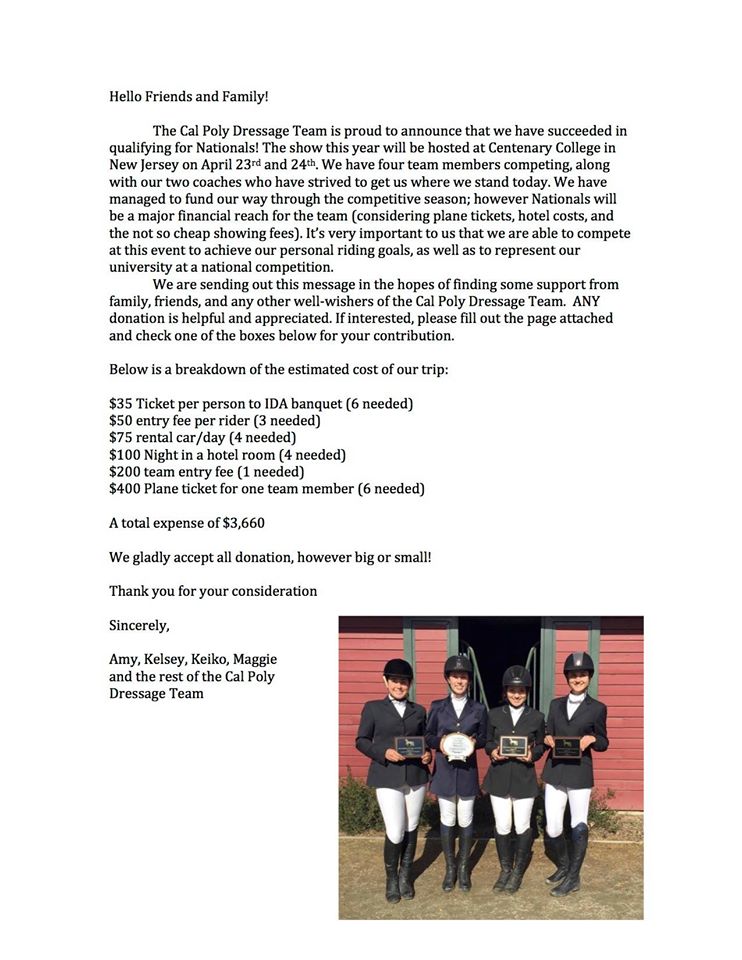 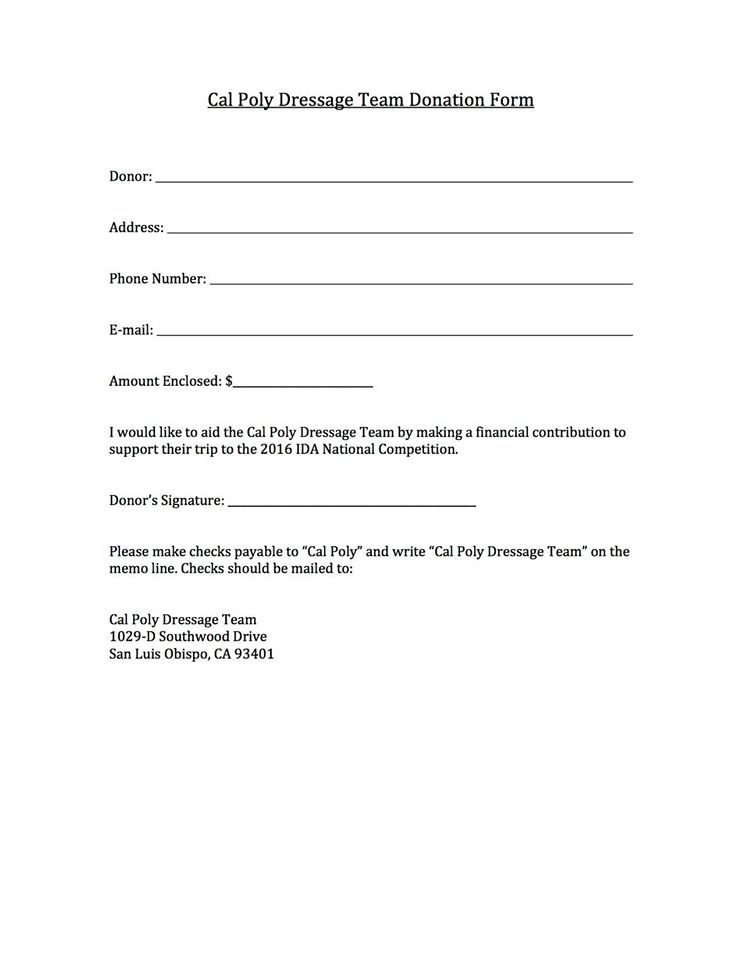