Earlier this month from April 12-15, nearly 5,000 FFA members from all over California got together to challenge themselves to Pave the Way. We heard from keynote speakers, national officers, listened to our FFA talent, saw David Nail in concert, heard our 2013-2014 California State Officers’ retiring addresses, and most importantly, our new state officers were elected! 2014 California State FFA Conference was a fun filled four days, it was hard to remember we were on a business trip! Though as fun as it was, we learned new things, were inspired by our speakers, and made memories that will last a lifetime. 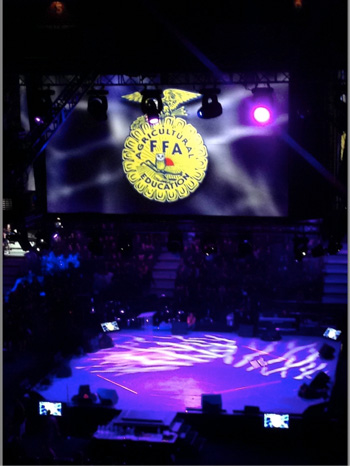 Of all of the speakers, my favorite keynote speaker was Jeff Yalden. He shared with us the hardship he went through growing up, how choices he made effected his life throughout adulthood, and how he deals with his mental illnesses. His speech was powerful, emotional, and inspirational. The main message he wanted to get across was that you can’t just wait for life to happen, if you want good things to happen, you have to work hard for them. He used school as an example, it wasn’t something that came easy for him, in fact he was in special classes due to the fact that he ‘learned differently’. While he told this story, he said something that I think we can all relate to. He said, “Learned differently…Don’t we ALL learn differently?” He then talked about how we might not be the best,  we may not be the most intelligent, and we may have to work a little bit harder than some people,and yes it might take a little bit longer; but we will make it to the top. We will make it to the top, only if we are willing to put in the work. His speech was truly inspirational, and he delivered his points in a way we could all relate to and understand.

In addition to the entertainment and the speakers, on day 2 of conference we were transported to Fresno State for workshops. There was many to choose from and you got to choose 3 to attend. They were all a little bit different, but a few things they all had in common were; representing yourself professionally and further your leadership skills, and personal growth, giving yourself and others value. One of my favorite workshops was about “SWAG”. It has a little bit different spin than what you might be thinking. This workshop was all about first impressions and making sure you are presenting yourself properly for job interviews, in the workplace, and just in general. I thought that this was important because it’s not something all young people learn, being able to represent yourself is an important part of being successful. 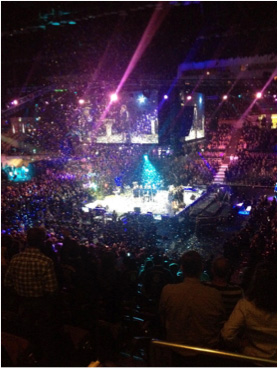 After all of the emotional, and motivational retiring addresses from the past state officer were finished it was time for the moment that we had all been waiting for. We got to see who became the 2014-2015 California State Officers!! From the South Coast Region (which consists of Los Angeles, Ventura, Santa Barbara, San Luis Obispo, Monterey Bay, and Santa Clara Section),  we brought a total of 74 ready to vote delegates.

Among the many candidates running for state office, two of our very own from the South Coast Region were elected as officers for the upcoming year. Louis Sanchez from Gonzales was elected as sentinel, and Sierra Bryant from Templeton was elected as secretary. All of the candidates have worked extremely hard to get where they are today. Congratulations Sierra and Louis! I can’t wait to see what you will do for this organization.

This was my first state conference, I have been missing out! I had a great time, it was an awesome opportunity to bond with people from our chapters, meet new people from all over California, and further our leadership skills. I can’t wait for next year!