The American Warmblood is among a number of fairly new and emerging breeds whose supporters are dedicated only to the evolution of the sport horse.  Unlike the more traditional “blood” registries, where horses are eligible for registration based solely upon whether or not their sire and dam lines are recognized, the American Warmblood Society (and American Warmblood Registry) are only interested in a horse’s type, conformation and performance.  This opens up the doors for people to creatively and contentiously cross breed horses of multiple bloodlines to create athletes that have the proper type, temperament and athletic ability to be included into the “breed” and go on to become strong competitors in their respective disciplines.

I’ve never had a horse that just went in and did the job for me like that; without tons of show miles and effort

“Currently, the registries are open to different breeds and cross breeds, so long as they can provide certain information regarding their horse’s history.”

Both the American Warmblood Society and the American Warmblood Registry are fairly new curators of the breed, and their sole purpose is to promote the American Warmblood sporthorse in the recognized English disciplines of dressage, eventing, show jumping and combined driving.  Breeding is monitored through actual inspections and performance results.  DNA testing is required for registration in both registries as a way to track and begin to create a good “foundation” for eventual generational breeding.  Currently, the registries are open to different breeds and cross breeds, so long as they can provide certain information regarding their horse’s history and, most importantly, performance record.  At this “age” in the breed’s history, many people consider the American Warmblood a “type” rather than a true “breed”, though it has been shown that long before the registry was created, people have been cross breeding the “cold” blooded, larger boned European horses with “hot” blooded horses, like the Arabian and the Thoroughbred, resulting in a horse that has a consistent type, temperament and athleticism.

“They are well known for being easy to train, ride and handle, and make wonderful mounts for less experienced or more timid riders.”

Some have chastised the “creationist” attitudes of the people who are attempting to “build” an entirely new breed of horse that is simply a mash-up of many others, but if thought upon seriously and for any length of time, it becomes clear that the people who have devoted themselves to the American Warmblood are actually much more strict in their registration requirements than many of the traditional registries that simply allow owners to register foals based upon the status of their sire and dam lines.  Many breeds, such as the Thoroughbred, American Quarter Horse, Arabian, etc., have seen a rise in what would be considered bad breeding practices, including “backyard breeding”, overly line bred horses, etc., which has increased and perpetuated certain genetic and conformational defects and disorders that actually upset the balance of the breed.  Supporters of registries like the AWR and AWS believe that their practices are actually “weeding out” certain issues and problems that can be caused by overzealous breeders and loose registry requirements. 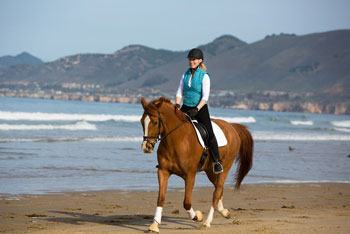 The American Warmblood typically stands between 16 and 17 hands in height, has a calm and attentive personality, three well balanced gaits, good bone and an athletic conformation.  They are well known for being easy to train, ride and handle, and make wonderful mounts for less experienced or more timid riders.  All colors are accepted, though solid colors (most specifically bay) are the most common.  Breeding stock must be approved through studbook inspection, and the primary emphasis of all breeders is on producing a quality athlete over preserving specific “bloodlines”.

One Central Coast resident saw a long time dream realized when she found her American Warmblood, “Dreamtime QRF”, affectionately known as “Dharma”.  Jill Tucker has spent the last 30 years riding hundreds of horses, but this time she wanted to be extremely selective in what equine she chose as a partner and friend.  She drove many miles, sat in many different saddles, and watched a lot of videos, but when she saw the ad for the 3 year old chestnut beauty that would eventually become her own, she said that her “toes tingled” and she simply knew she was the one.

Dharma was bred and raised in Oregon by a noted AWS breeder.  She was such an easy going and trainable horse, that the eventing trainer who started her had her competing and winning at the Beginner Novice level as a three year old.  Dharma is the type of horse that doesn’t bat an eye at anything; hops right in the trailer, is happy with the vet and farrier, loves to go on adventures, and rarely loses her cool.  Jill fell in love and brought Dharma home in December of 2010.

July of 2011 marked the beginning of Jill and Dharma’s show career.  They spent a long time preparing.  Few riders have the dedication and willingness to put in the time necessary to truly work and learn with a young horse, and Jill is one of those riders.  She’s the first one at the barn in the morning, riding before she heads off to work, and she maintains a good schedule with a noted local trainer.  All the preparation and time paid off; after the completion of their first test, Jill was nearly crying tears of joy because Dharma was so well behaved.  “I’ve never had a horse that just went in and did the job for me like that – without tons of show miles and effort,” Jill states. 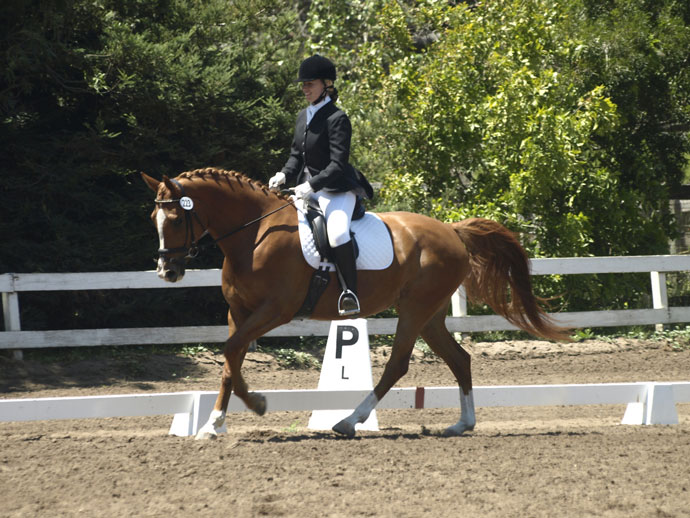 Jill kept Dharma at Training Level in 2012, realizing that she still needed some time to grow and mature before moving on to First Level.  In 2012, they finished 3rd in the Dressage Association of Southern California’s performance awards at Training Level and won Champion of the American Warmblood division.  In 2013, they moved on to First Level and earned the SLO CDS Adult Amateur High Point of the Year award and finished Reserve Champion with the DASC.

We try to get out on lots of trail rides for a fun mental break in our training routine.

Currently, Jill and Dharma are diligently working toward their Second Level debut, happening sometime this year.  But it isn’t all work for this dynamic duo; one of Jill and Dharma’s shared passions are their frequent trips to the beach.  “We try to get out on lots of trail rides for a fun mental break in our training routine,” Jill states.  Jill and Dharma are true partners, sharing a bond that is obvious and apparent to anyone who knows them.  It is undeniable that this team is in it for the “long haul” and will have a fabulous life together.