Polo: a game of the ages, and judging from the enthusiasm at the Central Coast Polo Club, a game for all ages. Polo most likely originated in Persia before it was introduced to India in the 13th century. Although associated with kings, queens, and society blue bloods, the game is popular and accessible to everyone because of clubs like the Central Coast Polo Club (CCPC). Founded by Megan Judge in 2002 and located in Los Osos, the CCPC has around 30 members representing a wide range of ages. One of the youngest members, playing since she was 10 years old, is a member of the team that took second place in the 2013-2014 United States Polo Association Girls Scholastic National Finals.

It was a cold windy coastal afternoon when I arrived at the club on Clark Valley Road to talk to the players and watch them practice. Not at all deterred by the chilling wind, the team members were busy getting the horses ready but still happy to take a few minutes to chat with me. The club owns around 20 polo ponies; several quietly dozing at the tie rack, waiting to the games to begin. The horses remained calm right up until the first chukkar then launched into action, only to immediately return to resting between chukkars. 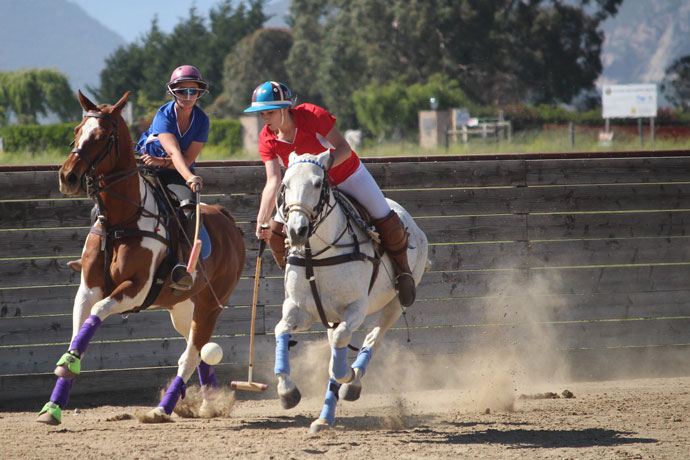 Each polo match consists of four to six chukkars (periods) that last seven and a half minutes with a warning bell at seven minutes and a final bell thirty seconds later (unless a team scores after the warning bell which stops the chukkar immediately). The game is played on a field or arena with goal posts on each end. The players try to hit the ball between the posts. The teams swap sides on the field after each game. Two mounted umpires accompany the players. A team consists of four players (and ponies) on an open field and three in an arena. Learn more about the polo rules on the CCPC website: http://centralcoastpolo.com.

Glenn Carros, on the Cal Poly team, gave me an overview of the game during his task as time keeper for the practice. Glenn’s enthusiasm for polo started a little over a year ago. He happened to see a game, was immediately enthralled and set about inquiring about learning to play. “I’d never even been on a horse in my life,” he told me, “but I knew polo was my game.” He found Megan Judge, signed up for riding lessons, and after three riding lessons was handed the polo mallet and told it was time to play. “I’m impressed! You must have some kind of seat to be able to play after only three lessons!” was my comment. Unfortunately, the wind was biting through my sweatshirt so I didn’t get to stick around to watch Glenn play.

Glenn’s abilities reinforce Megan’s thinking that everyone with the interest and dedication can play polo; it’s a game open to all ages and levels of horsemanship. Joyce Texton, another member of the Cal Poly team, came to polo from years of riding and competing in three-day. Both Joyce and Glenn love the game and plan to continue playing after graduating from Cal Poly. 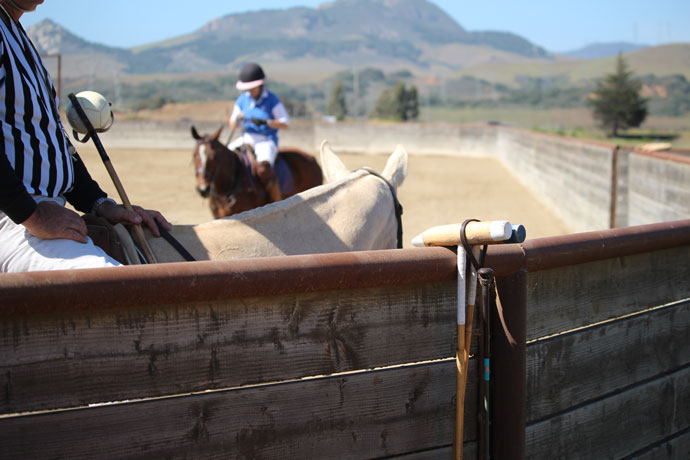 The Central Coast Polo Club is home for both the Cal Poly and Cuesta Polo teams, and home to four very talented young ladies who took second place in the National Finals held at the University of Connecticut in March of this year. Athena Malin, one of these young ladies, has been playing polo for the past three years, since she was 10 years old. An avid rider from very young, she became intrigued with the game and, with her parents’ support, took some lessons and began playing regularly. Athena is one member of a team of four; the other three girls are: Trista Noland, Jillian Tietje, and Emily Thomas. Two more young riders, Cassidy Wood and Petra Teixeira, are members of the CCPC Open Team.

Megan Judge states that the Central Coast Polo Club is open to everyone with an interest. The club is a 501(c) 3 nonprofit and fees are very reasonable. There are several options starting with riding lessons and polo instruction for beginner riders, and packages for private and group lessons for intermediate to advance riders. Scholastic and collegiate players have the options of monthly, quarter or semester packages. The club provides the horse and all of the equipment. 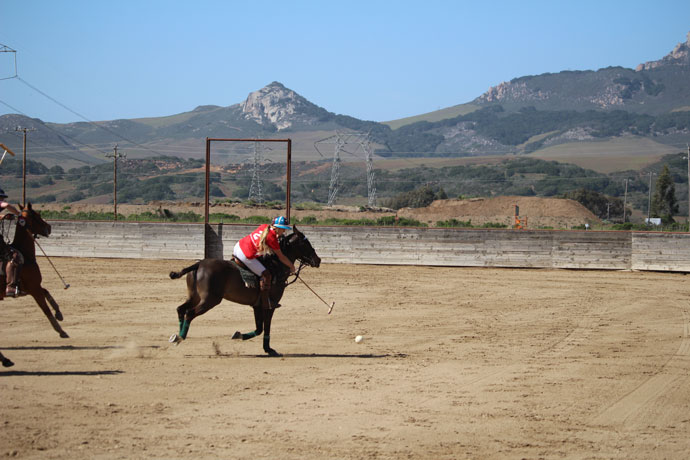 The polo school teaches the polo swing, the rules, polo riding techniques, and strategy. There is also emphasis on horse management and budgeting for a polo hobby. The school offers classroom discussion about rules and strategy as well as foot-mallet instruction and mounted instruction and coaching chukkars. Lessons, practices, and home games are held in the William “Bill” Carter Jr. Memorial Arena. Completed in August of 2009 it is a regulation 300′ X 150′ polo arena with 5′ walls.

What makes a good polo pony?

Megan says a good polo pony is one that has speed, turns quick, good conformation and a level head. Donations of horses are always considered providing the horse can play and clear a vet check. Because the club is a 501 (c) 3 nonprofit, your donation may be tax-deductible. Discuss the deduction with your tax professional. 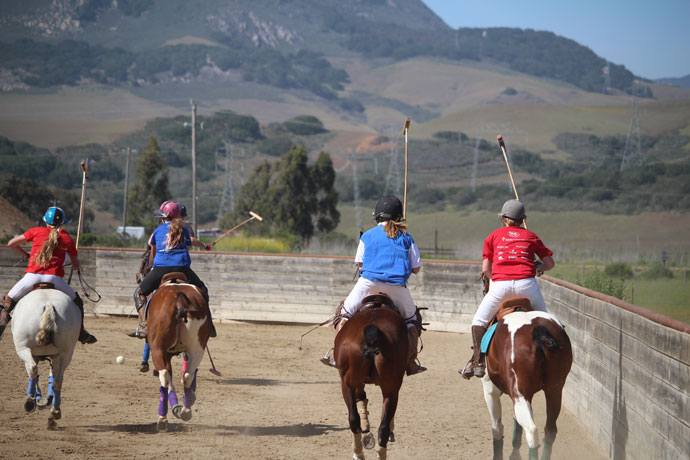 The Central Coast Polo Club is located on 80 acres at 2320 Clark Valley Road in Los Osos, California. The facility can board more than 100 horses with options for pasture, corrals, and stalls. The property features a one mile track, the regulation polo arena, mountain trails, and the Clark Valley Organic Farm. The farm supplies organic vegetables to local Farmers Markets and offers Community Supported Agriculture (CSA) shares; which, allows families to pick up a box of organic produce each Thursday.