In a little over a week there will be an epic event at the Clark Center in AG – the release of the much-anticipated “V: The Legacy of Sheila Varian.” film. It’s a one day showing of a documentary about local horsewoman Sheila Varian, and we hope you all come join us there to celebrate the life and legacy of one of the greatest horse people the world has seen. If you’ve been following along w/ SLOHN, you’ve read our articles about Sheila Varian and the Hands on Clinic she put on earlier this year, and a tribute to her amazing Desperado V.

We all know her as the matriarch of Varian Arabians, but she’s done so much more than that in her 60+ year career with horses. Everything from winning the world at the Cow Palace (which women didn’t do in the 1960’s, especially on an Arabian.) to creating some of the most epic bloodlines for one of the oldest horse breeds in existence. I’ve even heard rumor that she was partially responsible for the development of the slant load trailer. 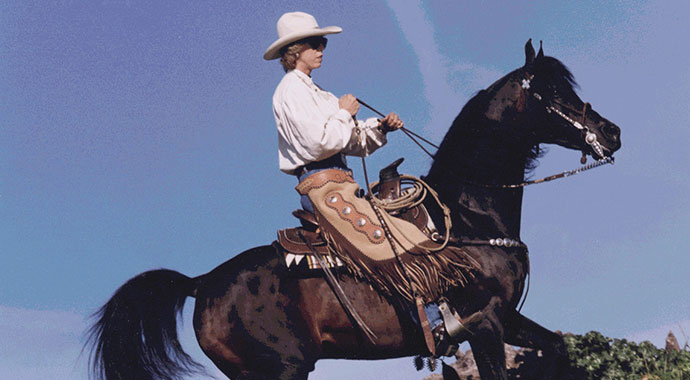 The press release from the film boasts that story of Sheila Varian “will be retold as never before,” and “brings viewers into Sheila’s personal, private world, and includes never-before-seen footage and photos from the early years of Varian Arabians.” If you’ve ever walked around the Show Barn at Varian Arabians and taken in the amazing history displayed on it’s walls you should be as exited as I am about the ‘never before seen’ stuff. 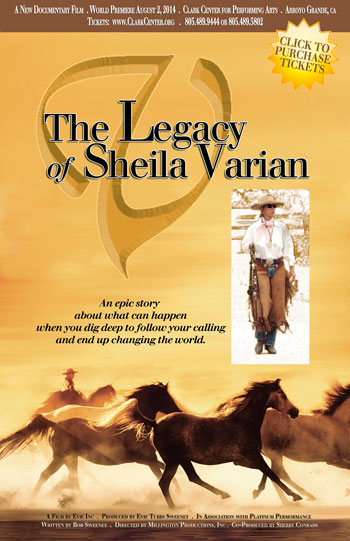 The press release also goes on to describe the film:

“The film walks viewers through the epic story of Sheila Varian, known as one of the world’s elite horse breeders and trainers. The film retells memorable stories from her childhood in Halcyon and early years as a school teacher at Arroyo Grande High School, to the humble beginnings of Varian Arabians. It was during this time that a unique vision began taking shape that was initially scoffed at, but later created a legacy so far-reaching that it is nearly unquantifiable in Arabian horse breeding around the world.”

“You’ll walk alongside a young Sheila as she learns from famous mentors and carries life-long friendships,” says Evie Tubbs Sweeney, the film’s producer. “You’ll ride with her as she breaks world-records and ‘wins the world’—the Open Reined Cow Horse Championships at the Cow Palace in San Francisco—in 1961 to a stunned audience. You’ll learn the nuances of what eventually developed her vision as a breeder. You’ll feel the exhilaration of watching her first three Arabian broodmares step off the trailer after their overseas trip from Poland in 1961. You’ll get to know the intricate personalities of all the equine characters in her story. You’ll share her hurts, struggles and ultimate triumphs from walking a road less traveled. You’ll be swept away unique relationships with of her stallions that changed the Arabian breed forever. But most of all, you’ll be inspired by what can happen when you dig deep to follow your calling, and end up changing the world.”

Then at the premier you’ll get to hear from guest speakers and Sheila herself as an added bonus to watching the film. The film premiers on Saturday, August 2, 2014 at the Clark Center in Arroyo Grande at 7:30. General admission tickets are $15. For those unable to attend, the premiere will be streamed online at www.iEquine.com. Join us in sharing and tweeting the event with the hashtag #svfilm.

Get more info and purchase tickets at www.EvieInc.net/SheilaVarianFilm and follow the Facebook page to see behind the scenes and hear awesome snippets and quotes from Sheila, her staff, and all of the people who’ve been there along the way.

Our friends at Platinum Performance were a big sponsor of the film, so be sure to give them a shout out on Facebook and Twitter for helping to bring this great project to life.