I used to wear colorful crazy-cow socks under my dress boots when I showed in Dressage as my way of not taking the very traditional dress of Dressage so seriously. A little bling was acceptable, say on the stock-tie pin or across the horse’s browband. Well now there is a place where bling and comfort and color are all acceptable and encouraged while riding a Dressage test . . .

We are all familiar with the beautiful and precise sport of Classical Dressage. Tests are performed in an effort to showcase the high level of training that goes into both horse and rider to get the movements one sees at the Olympic level. The notion that the precision of Dressage is reserved for only those horses and riders that count themselves a part of the “English” equestrian camp has long been a common ideal, however, for years, Western riders have also adopted and implemented techniques that are akin to the foundation of the classical sport.

In August of 2012, the horse community saw an explosion of interest in Cowboy Dressage, as the inaugural West Coast competition commenced, though the inception of the sport actually dates back to 1994, and can be accredited to Eitan and Debbie Beth-Halachmy. Once equestrians knew there was a place to showcase their abilities, as well as learn and interact with other like minded horsemen and horsewomen, the momentum of the movement was quite incredible.

From the November 2013 Cowboy Dressage World Finals Show Recap Press Release – “Our first Cowboy Dressage show was held in August of 2012. After that it exploded here on the West Coast. Record numbers of horses and riders began to show up at shows as the word spread. Shows were starting in the 50 ride range and quickly began to grow to 100 to 200 rides per show within the first year.”

SLO County Resident, Jill von Ilten and her daughter were at the first Cowboy Dressage show in 2012. “The first ‘gathering’, as shows are called, was held in Rancho Murrieta, CA. My daughter rode in that first clinic and show. Almost everyone there was immediately hooked! It was such a friendly group of real horsemen, whose goals were ‘good horsemanship’ over ‘winning the competition’. It was a breath of wildly fresh air,” Jill exclaimed!

Recently, SLO Horse News caught up with Jill to get some insight into the popularity of Cowboy Dressage, which has seen a meteoric rise in our local horse community since that first “gathering” in 2012. 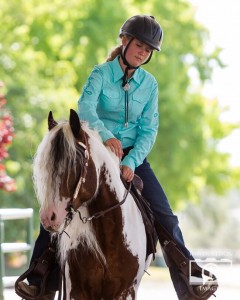 “Cowboy Dressage is a blending of the ‘best of both worlds’ in Classical Dressage and Western Riding. The court (rectangular in shape and marked with letters) and maneuvers are based on a western horse’s frame and way of going. The Cowboy Dressage court is shorter (20m x 40m) than the standard dressage court (20m x 60m), since a western horse typically moves in a shorter stride. It is Eitan Beth-Halchmy’s vision that this be a western division that is ‘enhanced by dressage, not ruled by it’. The tests are very western, and use the terms ‘lope’ and ‘jog’ in place of ‘canter’ and ‘trot’, and they can include obstacles, like ground poles. Just like in the days of the early West, the rules are simple and the freedom abundant. At its core, Cowboy Dressage is ‘Soft Feel’, which is based on release, not contact, and this was fundamental to the great horsemen of the past,” Jill explained.

One of the more interesting ideas surrounding Cowboy Dressage is the “handshake” membership, which does not include all of the traditional trappings of most horse clubs or associations. “There are no dues or ‘membership’ fees, other than taking the ‘handshake of commitment’ to ‘Soft Feel’. The goal is to be inclusive, not exclusive, to all western horsemen who want to take part in this growing phenomenon,” Jill explains.

Horses of all breeds, shapes and sizes are involved in Cowboy Dressage. While there are many horses that one would consider typically “western” participating, Jill had this to say, “This is one of my most favorite things about Cowboy Dressage:  All horses are welcome and celebrated. I have seen almost everything out there, and each one has the opportunity to become better in that court. All types of gaited horses, Morgans, Arabians, Warmbloods, Andalusians, Mustangs, ponies, Gypsies, Appaloosas, Quarter horses, and even grade horses show up; the list is only limited by the space on this page. The variety is fabulous and refreshing.”

There is also a variety when it comes to riders at the “gatherings”. People of all ages and equestrian backgrounds have adopted Cowboy Dressage as their riding style of choice. This is likely due in part to the nature of the sport, which seeks to be easily accessible to people with wide ranges of interests, incomes and ability levels.

Get Involved Locally and Beyond

Are you interested in getting involved with Cowboy Dressage? Check out the website, where you will find a calendar that lists events in our area and beyond. Jill recommends attending a “gathering” or clinic for the chance to experience the sport first hand and to ask any questions that you might have. The people are friendly and receptive to newcomers.

Speaking of clinics, Jill is organizing two this year, which will be hosted at Dream Ranch in Arroyo Grande. The first is June 25-28, 2015 and will be taught by HP Kind of Germany. He is the ambassador of Cowboy Dressage in his country, and is a fabulous instructor.

“I am really excited about having HP come for this clinic. He is bringing Cowboy Dressage to Germany.  He has competed in western events all over Europe, and has spent much time studying under legendary Jean-Claude Dysli, in Andalusia, as well as others. He will be giving private lessons on June 25th and 28th, and clinic-type group lessons on June 26th and 27th. Auditors are welcome for $25 per day during the clinic. HP’s English is fluent and easy to understand, as he has spent much time in the US. His focus is ‘Classical European Dressage for the Western Rider’, and he uses Cowboy Dressage as a stage for much of his training. This would be a fantastic chance for those who are possibly interested in becoming involved with the sport to come learn and ask questions,” explains Jill.

The next clinic will be August 29th and 30th, 2015.  Lyn Ringrose Moe, one of the partners and founders of the Cowboy Dressage organization, will be teaching. Both clinics offer rider and auditor positions (rider positions are limited). Contact for both is: Jill von Ilten jillsquilt@gmail.com  (805) 481-1548.