Making the Rounds as a Pet Care Driver

“I was highly surprised by the volume of ‘packages’ I pick up each week. I pick up 3/4 to a ton of weight three days a week,” Brandon stated. He continued to talk about his job, “I love animals, so I try not to think about my cargo.” Brandon goes to three different regions – one region a day – three days a week. “I’m the FedEx driver for the Pet Crematorium,” Brandon said with little chuckle.

Each animal is already packaged in a cadaver bag and identified when he stops at the veterinarian hospitals on his route in either Bakersfield, Taft or on the Central Coast. Eden Memorial Pet Care relies on a digital tracking system which keeps tabs on each animal from pickup to the customer. Brandon says he is efficient at what he does, “I roll in, get the animals and move on.”

This pace is quite different to what Brandon used to do as an ambulance driver and an EMT. The adrenaline rush of helping people in an emergency is gone. He enjoys the more relaxed pace with his role at Eden Memorial. “I enjoy driving by myself and my cargo doesn’t talk,” he said casually while subtly displaying his sense of humor.

Dealing with people, horse people in particular, is a part of his background. “I know the Baxters at Twin Rivers Ranch and worked their big horse events as an EMT,” explained Brandon when asked about his horse connection. “In fact, I found the next job for the woman I replaced at Eden. She was looking for something more directly connected to horses. As she trained me for this job I told her about an opening at Twin Rivers Ranch in San Miguel.” 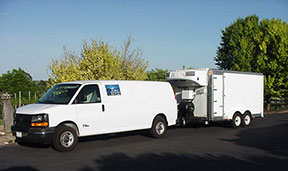 Although Brandon’s past ambulance driving experience and his current focus of Pet Care Driver seem completely opposite there is carry over between the two jobs. “My driving skills have to be sharp and my lifting and carrying techniques are used. I still lift and carry bodies – sometimes from weird positions – so I have to be sure to take care of my body so I don’t tweak my back.” Brandon puts each animal on the van himself. The 1 ton van is specially outfitted for this purpose and the front is sealed off from the back.

Working part-time for Eden Memorial Pet Care allows him to pursue other driving opportunities. He transports classic cars on his other work days. Brandon also enjoys getting on a motorcycle regularly.

Born in Missouri, Brandon has called the Central Coast home for the past 20 years after arriving here from Canada where he spent most of his childhood. “I just wanted to live in California,” Brandon explains and so he moved here on his own. He currently lives in Paso with his wife of 11 years, two stepsons and his son.

He’s been on a horse once, and unfortunately was dumped so that’s why he sticks to motorcycles. After getting injured on a dirt bike he now sticks to the streets. However, Brandon is fully aware of the dangers there too. “I’ve seen the other side of motorcycle crashes,” he said reminiscently. “That’s why I play it safe; but you gotta live.”

When that sad time comes for you and your animal friends, both small and large, you can feel comfort in knowing that Brandon, and the rest of the Memorial Pet Care staff, truly understand your grief and have nothing more than your comfort on their minds.  They treat each animal that comes through the facility as though it was their own – with care, compassion and gentleness.  Death is a part of life, playing it safe is one of the things that sets Eden Memorial Pet Care apart from the rest.

Written By
Sharon Jantzen
More from Sharon Jantzen
In the event of a Public Safety Power Shutoff an entire community...
Read More