“It’s all about the Amateur”, a long-time CDS (California Dressage Society) official once said to me. “They are the backbone of our organization. Most of the focus goes to the top-level competitors, but if not for the Amateur our organization would not stand.”

Thus the California Dressage Society developed the Regional Adult Amateur Competition (RAAC) to give the Adult Amateur a place to compete that is a mid-level stepping stone to the bigger Annual CDS Championship Show. The San Luis Obispo Chapter of CDS has been the host of the Central region’s RAAC since its inception. Golden Hills Farms  in Paso Robles recently hosted the RAAC over the weekend of August 23-24, 2014. Not only was this the annual RAAC but it was also a full *** 3 star (CDS, USDF, USEF) Dressage Show.

Here are some stories from the RAAC and *** Dressage Show: 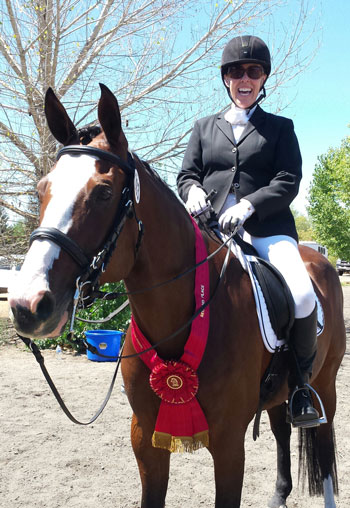 Turning a Homebred Horse into a Reserve Champion.

Susan has been riding and competing for many years mainly in the sport of Eventing where a horse and rider team participates in 3 events: Dressage, Cross Country jumping and Stadium jumping over a weekend. This year Susan wanted to focus on the Dressage discipline of Eventing and set her goal to compete in the Regional Adult Amateur Competition at Third level. This meant that Susan and her horse “Tattletail” (Holsteiner) needed to go to other CDS shows and get 3 Third level scores from 2 judges of 60% or higher to qualify for the RAAC. She accomplished that and then competed at this year’s RAAC.

Susan’s coach, Karen Robinson Cornelius  had this to say about Susan’s ride on Tattletail, “They earned their best score all season with a 67.949% at Third Level Test 3, under judge Creeky Routson (S), earning them Reserve Champion Third Level Novice Central RAAC! They were stronger and steadier than ever before showing great harmony and accuracy. I was super proud of Susan, and told her husband, who was videoing the ride, ‘That was a great ride, her best all season!’ And sure enough it was!

Susan also attended some Eventing trials this season winning her division. Susan has goals of moving up to Preliminary Eventing next year, a long time goal of hers. Maybe her success in Dressage this season will encourage her to try Fourth Level Dressage next year. It is difficult though to train and do well in both Eventing and upper level Dressage. Eventing requiring the demands of all three disciplines: dressage, cross country and stadium jumping, which leaves little room to work on high levels of Dressage. We’ll see what is in store for next year, but whether it be Eventing or Dressage, there is no doubt Susan and her homebred horse, Tattletail, have what it takes to do well in any discipline. Susan’s bright personality accompanied with her never ending smile and laugh make it a joy to coach them. She always does her homework and absorbs everything in her lessons.” 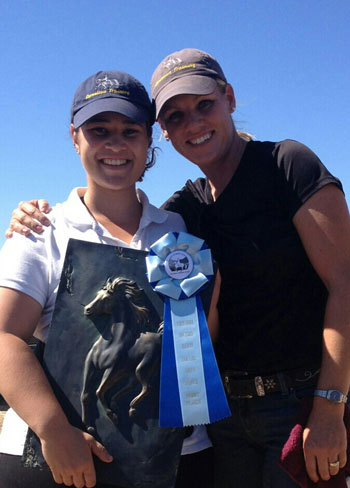 “Olivia is no ordinary teenager”, remarked her coach of a few years, Karen Robinson Cornelius who has taught this once hunter/jumper champion rider to learn the joys of Dressage. “Olivia wants to try out for the Junior/Young Rider Dressage Team next season. She has certainly shown what it takes to achieve such a goal. Not only does Olivia possess good horsemanship, but also talent and dedication. She has overcome huge hurdles in her own health and well being, to say the least.

Every day is a struggle for this young gal. She has to deal with a long list of medical issues day in and day out, and push through them to achieve her goals and dreams. She has such incredible determination and talent. When you meet Olivia, you would never know she had these handicaps. She appears to be a normal teenager, but every day she has to push past the nausea, pain and medication side effects, to name a few. Doctor visits, IVs, shots, passing out, dislocating joints, etc. are a regular occurrence for this young lady. I have rarely seen a rider with the dedication and talent Olivia has. She motivates me seeing the struggle she has to endure every day. I don’t know how she does it, but she does. I can relate to her because when I was young I had Lyme’s Disease and nearly died. I remember how miserable every day was. Seeing her live with the health struggles she has gives me motivation when I’m tired or not feeling well.

Olivia has come a long ways in her riding and training. Last year she won the California Dressage Society Junior/Young Rider Northern First Level Championship 15-17 years. This year she showed at Second Level. This show in Paso she needed one more score to qualify for Annual CDS Championships. She easily earned this with her Saturday rides being the best of the weekend’s rides and best scores she’s had this season, with a 68.143% at Second Level Test 1, and 66.548% at Second Level Test 3, under judge Gail Hoff Carmona (S). Sunday’s ride was more difficult being Victoria was more difficult to get connected in the warm up, but Olivia rode it well, despite her rib popping out of place during the ride, earning a 62.500%! She went home with Junior high Point for both days; A great success.

Now the pair is qualified for 3 different Championships. The next show on the calendar is the Southern California CDS Junior/Young Rider Championships in Del Mar, September 12-14, then the USDF CDS Championships September 25-28, 2014, at the L.A. Equestrian Center. She will compete in the Second Level Junior/Young Rider division. Beginning in October, she will step up to Third Level to try and earn a spot on the Junior/Young Rider Dressage Team for 2015. Next year will be a big year, with bigger shows and a big goal to be met. We are both very excited. Riding is what keeps Olivia going. With what she has gone through in the past few years, no hurdle is too big for this strong, beautiful, talented young lady. I wish her all the luck in the world.” 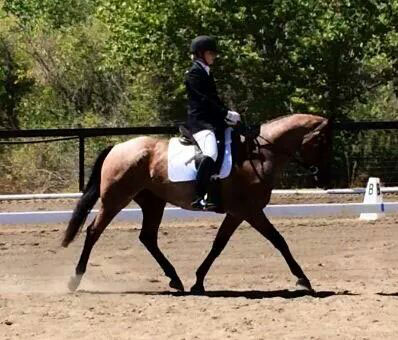 One year ago, Karen Robinson Cornelius began riding Hefner get him ready to sell for his owners, Kelly and Marcus Greene of Markly Farms. Karen goes on to tell the story behind his very first Dressage Show: the RAAC, “He was quite green and I could barely canter Heff, nonetheless be able to have some sort of connection with him in the bridle, when I first started riding him one year ago. As the months passed, Heff showed his willingness and excellent ride ability. He progressed in his training better than I had ever expected. We took him to a few hunter jumper shows, and he did quite well. We trained him to jump a course of 2’9”-3’ comfortably, and he learned his lead changes too. Although he did very well in his jumping, I knew he needed more training on the flat in his Dressage to improve his jumping. I began to focus on teaching him more of the fundamentals of a Dressage foundation. He learned quickly and this began to improve his jumping, yet he didn’t seem to have much scope in jumping to go much further than 3’, so we shifted our focus on training Heff to do Dressage.

I think Dressage is his calling. Although he needs more time to develop both the strength required for collection and the strength for solid foundation for the higher movements, he is already schooling the movements in Second and Third Level with ease. We decided to take him in his first Dressage show, the RAAC in Paso. This was only his 5th time off his home property, and he settled in like a champ. He warmed up very nicely, even with all the other horses in the ring. He wasn’t quite sure about the flapping judge’s tent, but after a few passes, he was like “oh, that’s old news” and trotted right by. We did our First level ride first, and earned a 68.548% under judge Creeky Routson (S). Then we rode our Training level test and earned a 72.200%! We took home Open High Point on Saturday! We are already planning for Heff’s next Dressage show. He is for sale, technically, but we haven’t marketed him yet. We are having so much fun working with this lovely horse, we may just see if we can make it in the FEI arena with our once promising hunter horse. That would be icing on the cake….. I know he can do it.”

Cover photo by Ariane Rezvani: “The Buckskin Brigade” These are all riders and horses who participated in the Regional Adult Amateur Competition and/or the *** Dressage Show held at Golden Hills Farms in Paso Robles August 23-24, 2014. Two of the riders, Debra and Dana are SLO CDS members.