Is that a Zebra? No…it’s a horse after enjoying some fun in the mud during the recent unusual storm that shook SLO County this past weekend. The remnants of Hurricane Dolores hung around the county for several days, with the bulk of the storm dumping much-needed moisture on Sunday, July 19th. Rain has become quite the novel experience for us drought-stricken Californians, and that goes for our horses as well!

Paso Robles and Atascadero got the biggest influx of rainfall, with totals (as of Monday, July 20th) reaching 3.55 inches. Nikki of Silver Shadow Training in Creston, reported all seven horses to be a complete mess after a day of frolicking in the mud. Many other Paso residents had to deal with flooding and muddy accommodations for their four legged family members…it looks like there will be a lot of bathing happening this week!

The grey horses looked like they had the most fun at Silver Shadow Training. Photos by Jake Faulstich

Not only did San Luis Obispo receive a good dose of glorious rain, but we also got an incredible show, with lightning piercing the sky and thunder shaking houses and barns. Unfortunately, power was knocked out to over 10,000 residents countywide, and some went without it for multiple days.

The Pereira Ranch in San Luis Obispo was without power for several days and had this to report, “Not the best timing for this busy week, but we will survive. There are a lot worse things to deal with in life, this is small potatoes. Actually, it’s been nice, because we stay out working ’til dark, then sit around the dining room table and talk, giving us very memorable family time. My uncountable loads of laundry, trickle showers and no refrigerator are worth every bit of the quality time that we are getting together without sitting in front of the TV!”

It also looks like the Pereira Ranch kids found something fun to do with all of that mud. 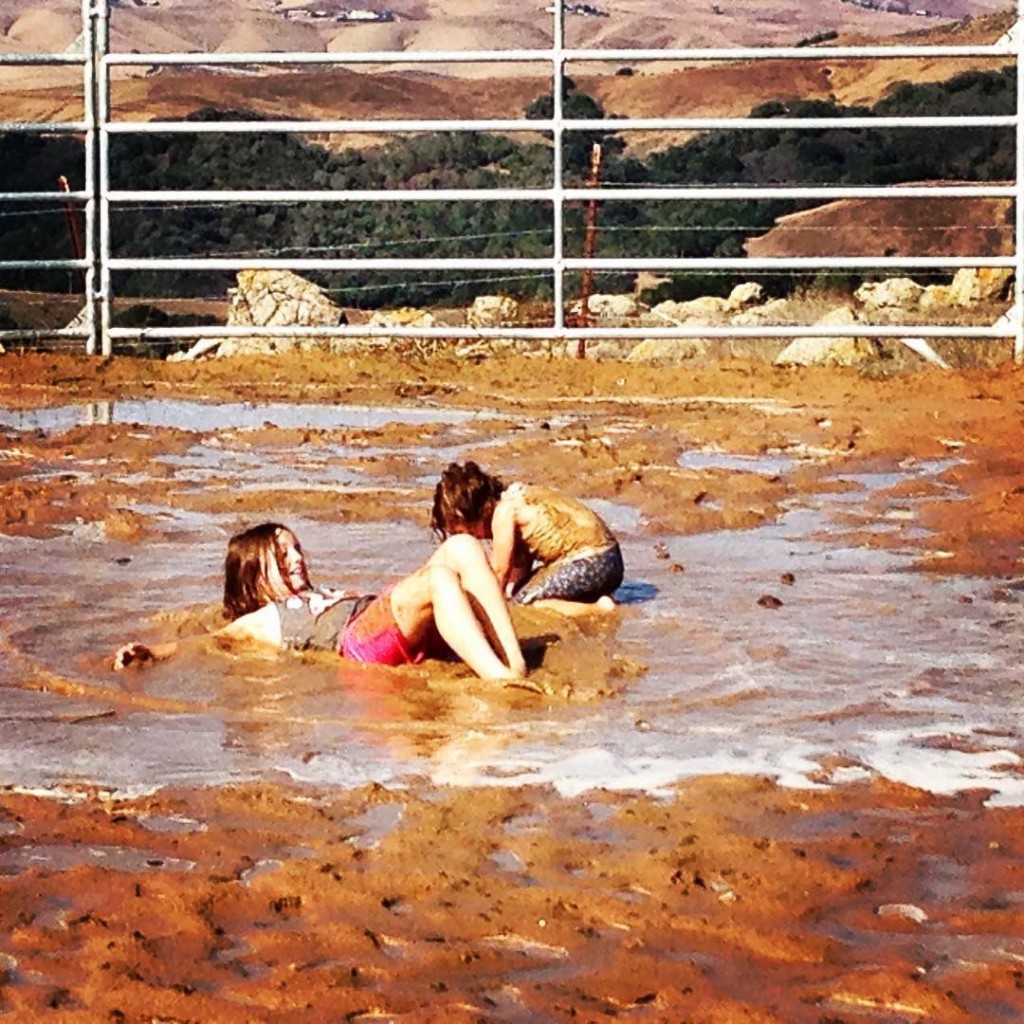 Shadow Hills Riding School  based at LOVE Farm in Los Osos was all ready to enjoy a schooling show on Sunday, July 19th, but after nearly 2 inches of rainfall, the ring looked more like the beginnings of a swimming pool as dawn broke. Peggy had to quickly alert participants that the show was canceled. It has been rescheduled for Sunday, July 26th .

“Who would have thought we’d have rain in July during a drought?”

commented Peggy in response to having to reschedule the show.

Many South County Ag families were told to evacuate the camping area at the Santa Barbara County fair early Sunday morning. Imagine the chaos as hundreds of fair participants and their rigs made the mass exodus from the parking lot.

The Poorman family of Arroyo Grande had an especially “fun” adventure as they left the fairgrounds. “We were told to evacuate Sunday morning. Driving home, we saw three accidents. We tried to dump the tanks in Pismo, but were unable to cross Hwy 1, so we decided to drive home to the ranch. The truck and trailer got stuck on our dirt road, which has a fairly steep incline leading to the house. Three of us spent four hours shoveling and moving dirt and mud with the aid of a tractor to free the truck and trailer. We managed to ‘get ‘er done’ and parked before another downpour hit. Wow, what a crazy day! We were wet and tired.”

Rain in July brought everything from fun to frenzy, but we are thankful for the much needed moisture that will, hopefully, help get us back on track towards ending this drought. One thing is for sure, though, this little mid-year deluge created some memories that will last a lifetime!