There are many rare breeds of horse in the world, but few hold as much mystique as the Gypsy Vanner. Perhaps it is their “fairy tale” appearance, or their colorful history, but whatever the reason, the Gypsy holds a certain mystery and beauty that quickly captures interest and hearts. Though the breed has an origin that can be dated back to the 1800’s, there is very little documented information of early origin for purposes of tracing the exact course this breed has taken throughout history. Still, in piecing together the breed’s creation, it becomes apparent that they are indeed quite special and quite unique.

In fact, the world was recently introduced to several special Gypsy Horses from the Gypsy Royal Stud in Canterbury New Zealand in the second installation of Peter Jackson’s “Hobbit: The Desolation of Smaug” – no other breed would have fit the bill.

This month we speak with 13 year old Melina Jones about her experiences with her Gypsy Vanner named Liam. 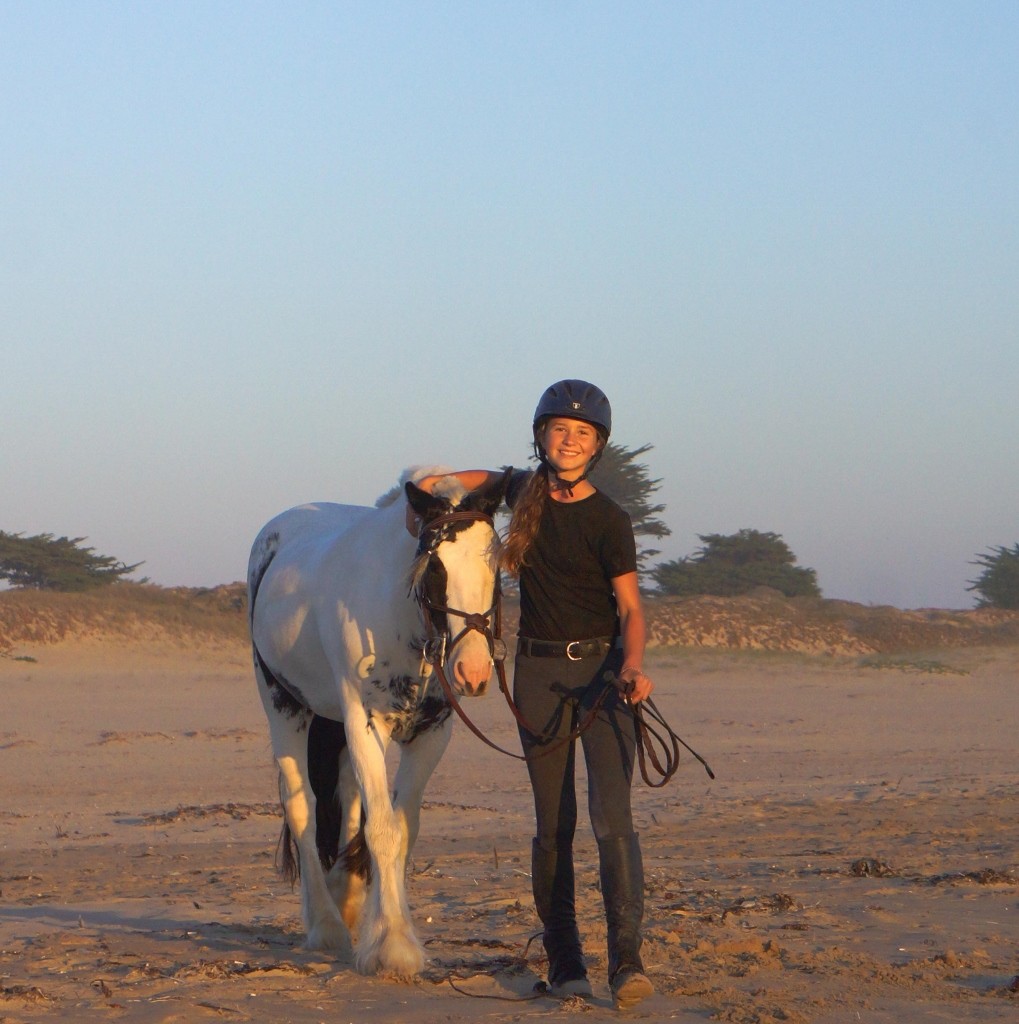 Let’s find out what it is like to own such a unique breed of horse. Let us introduce you to a special girl and her very special best friend of 3 years, Liam. Melina lives in the South County of San Luis Obispo, and has been riding for six years, having done everything from Cowboy Dressage to Western Pleasure, but her real love is Show Jumping and Eventing. Liam is 7 years old, 13.1 hands tall, and possesses all of the beauty and mystique of the Gypsy Vanner. Melina says “I have always admired the Gypsy horses…the second I saw Liam I knew he was the perfect horse for me”. I asked Melina a few questions about her experience with the breed.

Tell me what you and Liam love to do in terms of riding?

“I do everything on Liam – trail riding, jumping, a bit of western riding, cowboy dressage and dressage. Our favorite place to ride, though, is the beach; we love to be free and to gallop.”

What has been your experience with the Gypsy breed; the best and the worst qualities?

“Gypsy Vanners are like big puppy dogs. They love to be loved. They have amazing temperaments and are great family horses. I don’t think there are any particularly bad qualities about them; they are always willing to please and will do almost anything you ask of them.”

Tell me about some of the fun and unusual things that you have done with Liam? Did you buy your horse and then choose your discipline, or did you buy him already trained for something specific?

“I bought Liam as a 4 year old who had only been under saddle for a little less than a year. He still needed lots of miles put on him. I was only ten at the time, so being a green rider and buying a green horse was definitely a risk. It hasn’t been easy, and at times very frustrating, but looking back now I can really appreciate the time and effort I have put in to him. I have trained Liam to be ridden tackless, which he absolutely loves! We used to do Pony Club, and now we do some local shows. He is a once in a lifetime horse.” 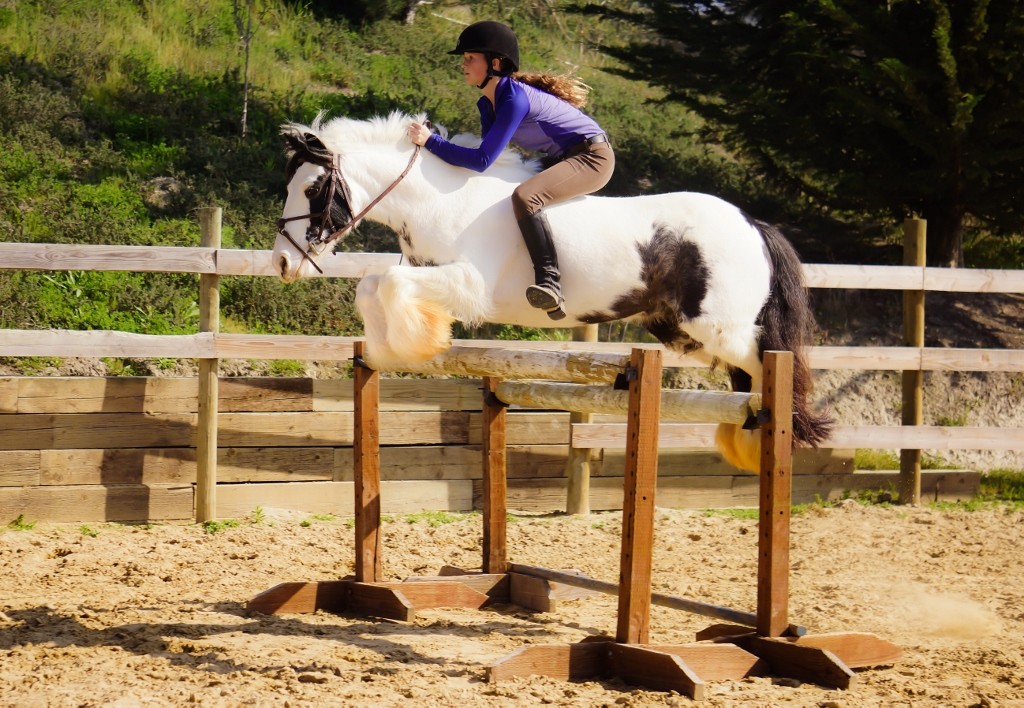 What is your favorite memory with Liam?

Now on to some Gypsy Vanner history . . .

History and Origins of the Gypsy Vanner Breed

The Gypsy Vanner owes it’s origin to the Romanichal people’s of Great Britain, whose nomadic lifestyle has led to the modern day term of “gypsy” or “traveler”. The Romanichals made their homes in “vardoes”, which are essentially intricately carved and decorated “living wagons”. Because of their lifestyles, they required strong, healthy and well mannered horses to pull their vardoes, trading carts, etc., and thus they began a process of crossbreeding to produce suitable candidates. Much like the Bedouin people’s who helped to refine the Arabian horse, the Romanichals thought of their horses as part of the family, and due to constant exercise, grazing and quality care, they were usually kept in very good condition. Horses with “unreliable temperments” were not tolerated because they lived in family groups and were often handled by children. Additionally, it was more difficult to keep a horse of traditional “draft” size, and thus smaller horses (who ate less and required less care) were favored. At the time, a 15 hand, heavy boned horse was the norm, and they were simply dubbed “Cob”, “Coloured Cob” and in rare instances when a near perfect specimen was bred, “Proper Cob”.

In the 1850’s in Britain, piebald horses, skewbalds and other horses of color were often “culled” from the herds of the non nomadic peoples, as solid colored horses had come into “fashion”. The Romanichals, however, considered these culled colored horses to be extremely valuable and even status symbols among the culture. Shire horses and Clydesdales, which possess the unique feathering, signature color and good bone the Romanichals were looking for, were used in early Gypsy Horse breeding, and in fact, it is believed that both the Irish and British Gypsies actually sought to breed a “smaller Shire with more feather and a sweeter head”.

As time went on, the Romanichal began to breed specifically for color, profuse feathering, smaller size and more “action”. This led them to cross their more traditional drafts with certain Cobs and Ponies, including the Hackney. It was, however, the Section D Welsh Cob and the Dales Pony that were found to be most valuable in terms of creating these most desired traits. Pedigrees were only communicated verbally, so there is little tangible record to look back upon, but it is believed that the two foundation sires of the modern Gypsy breed were called “The Old Coal Horse” and “Sonny Mays’ Horse”.

The first real infusion of Gypsy Horses to America came in the mid 1990’s by Dennis and Cindy Thompson. Because of the lack of written history, and the many different names the breed had taken over the years (including the Gypsy Horse, the Drum Horse, Gypsy Cob, Coloured Cob, Simple Cob, etc.), they considered the breed “unnamed” and thus decided upon the term “Gypsy Vanner”, because of the historical significance of the breed pulling “colorful caravans”. The Gypsy Vanner Horse Society (founded in 1996) is the American registry that was formed for the breed by the Thompson’s, who sought to shine a respectful light on a breed of horse that many dismissed simply because of who bred them.

Today, Gypsy Vanners are used for a variety of disciplines and purposes. Their uniquely good manners, size and ability to adapt to different situations make them great mounts for children and amateur riders. They can be quite competitive in certain disciplines, including jumping, western trail disciplines, combined driving and dressage; in 2001 a pair of Gypsies were named grand champions in combined driving, and in 2010, a Gypsy Stallion earned a championship in the USDF’s All Breeds Program for his achievements in third level dressage.

GVHS standards call for horses between 13 and 16 hands, and DNA testing is required. As of 2014 the horse must have come from a GVHS-registered sire and a mare whose DNA markers are available to confirm parentage. All American registries, including the International Drum Horse Association, employ the Animal Genetics Research Laboratories at the University of Kentucky as the repository for their registered horses’ DNA markers. Several well established Romanichal breeders in the UK are still breeding Gypsy horses, and have been doing so for generations. They continue the trend of breeding down in size, and it is not unusual to see horses from these breeders at only 11 and 12 hands. 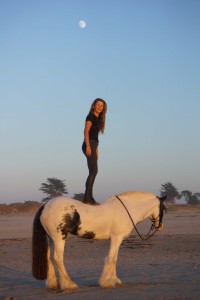 Finally, we ask Melina, What are your plans for the future when it comes to your own riding, and what has owning a Gypsy taught you that has prepared you for that? What are your ultimate goals, and is Liam going to stay a member of your family?

“I recently bought a new horse that I hope can bring me up through the higher levels of show jumping. My goal is definitely to compete in the Olympics someday, and to keep learning and growing as a horse person. I still plan on keeping and showing Liam, though. Having my Gypsy has taught me how to trust my horse while still having boundaries. Honestly, I doubt that I will ever be able to sell my very special first horse.”

A very eloquent interview with a very special, talented and well spoken young lady; Melina is light years ahead of her time when it comes to understanding horsemanship, dedication and desire. She has big dreams, and it seems obvious that even though green riders and green horses usually don’t mix well, in this instance, one special little Gypsy Vanner has helped to prepare Melina for a lifetime of accomplishments.

Written By
Sarah Williams
More from Sarah Williams
It’s almost as though we’ve personified our horses, believing them to be...
Read More