There is this great little invention that I have been using for a very long time with my horses. As a matter of fact, I have multiples of these little tools – which seem to disappear at the barn a bit like socks in the dryer – and I pull it out both before and after a ride. It’s simple, comes in many different shapes, sizes and colors, but they all achieve the same goal…yes, I’m talking about the “hoof pick”! 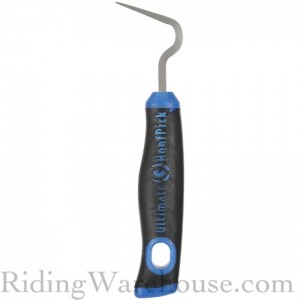 Why are you talking about the hoof pick? I can hear you all thinking right now. Well, it’s because the process of picking a horse’s feet seems to be a dying art. I was out at the barn the other day, and I noticed one of the young riders there pull her horse from his stall, put him into the cross ties, brush him, saddle him and proceed to lead him to the arena without checking his feet. “Well, he was just in his sandy pen,” I thought to myself. “She’ll surely check them when she’s finished.” After her ride, she brought him right back into the barn, unsaddled, did another quick brushing and back to the stall he went. I was perplexed, and mainly because this wasn’t an isolated incident with just a single person; in fact, most riders seem to forego the routine checking of feet.

“It’s hard on my back”, “My horse is a pain when it comes to picking up his feet”, or “It takes too long, and my horse isn’t around any rocks anyway” seem to be the most common excuses that I hear. Unfortunately, these things are just not a reason to forego one of the staples of good horsemanship. My mare lives in a barn stall with a run; the run is filled with a mixture of shavings and sand. There are, however, trees that surround the property that drop “seed pods”, and I have on more than one occasion found these lodged in her feet. Think about it…how would you like to go for a run with a rock in your shoe?

Just a few days ago, I caught up with Heather Niedson, a competitive Hunter Jumper Rider from Paso Robles, and we had a little discussion about picking our horses feet. Heather related to me a very interesting story. She was at an Event in Northern California with her horse, and like me, she is fairly attentive to all of the little things you usually learn when you’re coming up as a young rider. The feet are very important to her, so she checks them often (even carries a pick in her “show ring bag” so that after warming up and just before going into a class, she can give them another quick look). Heather had checked her Warmblood, “Ollie’s” feet before leaving the stable area and walking down to the warm up arena. She rode for about 20 minutes and headed to the gate to enter her class. Following routine, she dismounted, gave him a little wipe down with a damp cloth, grabbed the hoof pick and proceeded to check his feet. To her horror, in his left front, just beside the frog, she found a flat headed nail lodged in the crease. “At first I thought it had punctured his foot and I was beside myself, but looking closer, I saw that it was just laying flat in the crease, so he must have just picked it up in the warm up arena,” Heather said. “Still, it took me a little work to dig it out. We went into our class and then headed straight to the show farrier afterwards to make sure things looked okay, and thankfully they did.”

Heather’s story just cemented my resolve to always check my horse’s feet, both before and after a ride. I board at a fairly sandy barn, and my mare actually has gel pads on her front feet, and her stall is completely filled, both inside and out in her run with shavings, but I still always take the extra few minutes to pick up each foot and make sure that nothing is lodged inside. It’s a good practice, and not just to look for rocks or foreign objects, but also to make sure that the hoof itself isn’t warm (a sign of possible abscess or injury), isn’t “thrushy” or doesn’t otherwise look abnormal. I think that the first thing I learned to do as a young rider was pick my horses feet – a little five year old girl pulling up her pony’s hooves with the help of her daddy – and that is one of the many lessons that I have not forgotten over the years.

I suggest to everyone that they purchase at least two or three of these magic little tools called “hoof picks”, and keep one in the groom bucket, one in the horse trailer, and a spare hidden somewhere that the “hoof pick gnomes” won’t think to look (heck, I keep one in my truck, just in case). It’s invaluable that we take seriously the health of our horse’s feet.

Written By
Sarah Williams
More from Sarah Williams
We get pleasure when we feel as though we have accomplished something,...
Read More