Recently, a friend of mine purchased a new horse. She is a quite experienced Hunter Jumper rider who competed in Southern California from the time that she was ten years old through high school. This girl is accomplished, and has the accolades to prove it, but, when it came to her new horse, she found that she had a bit of fear, apprehension and irritation. Even during her early years, she rode at barns on seasoned horses, and when she got her own horse (who was a typically “hot” off the track Thoroughbred), she kept him at a “training barn”. It occurred to me that she had never actually been on her own with a horse that wasn’t “finished”. At her wits end, she came to me for advice when her new horse began displaying typically cranky, dodgy, pushy and “adolescent” behaviors.

I have given this very same advice to countless friends and barn mates who find themselves in the same position as the friend I mentioned above…sometimes we all have to go back to the basics, no matter how good we are in the saddle or how wonderfully trained our horse is. We come off of a series of “highs” where the horses that we have been riding seem to do everything right, and when we find ourselves in a position where things just don’t seem to be falling into place, we lose confidence and start forgetting the all important “little things” that made us good horsemen and horsewomen in the first place. Going back to basics doesn’t mean that you are not a good rider, and it doesn’t mean that you are in over your head, it just means that without giving attention to the foundations of horsemanship, you are doing yourself a disservice.

So, the advice I gave to my friend was to spend a couple of weeks doing ground work.

I told her that she needed to spend time leading, turning, and working with her mare in the round pen. She should require that her mare respect her space, and correct bad behaviors, such as walking ahead of her, turning into her when she isn’t asked, etc.

I also suggested she turn her mare out in the arena and work on free lunging, focusing on getting her mare to stop and turn toward her when she gives the “whoa” command. These things would all help her to establish her strength and confidence, and would give her mare the structure that she needed to feel safe and secure.

Back in the Saddle

After a few weeks, I went out to my friend’s barn to watch her ride her mare.

The change was obvious and quite profound. My friend had a smile on her face and her mare was working her ears, licking and chewing, and giving all of the signs that she was ready to work.

Still, certain behaviors were cropping up that my friend didn’t seem to be able to control. Her mare would stick out her shoulder, dive to the inside of the arena, and brace herself against the bit when asked to really use her haunches. The frustration from both horse and rider was obvious the longer that she worked her. My suggestion, once again, go back to the basics…only this time do it in the saddle.

Even after establishing control on the ground, when we throw our leg over the saddle, we often expect that everything is just going to work out, but that isn’t the case. Riding is a constant give and take; a constant evolution. In order to foster this evolution, we must occasionally go back to the beginning. This can mean working circles, diagonals, and even spending an entire session working on getting our horse to move off of our legs, backing, turning on the haunches and the forehand, etc.; going slowly and praising the good behavior while quietly and quickly correcting the bad.

Foundation work has a place at all levels of riding. Even the most experienced riders on the most competitive horses have to go back to working on the little things from time to time. This reinforces the behaviors that we build upon to do good work in the saddle. 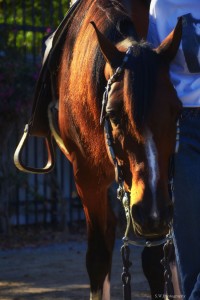 After about a month of ground work and “basics” in the saddle, my friend had her new mare in a place where she felt comfortable and confident. The bad behaviors were slowly fading and being replaced by good ones. Two months after purchasing her mare, my friend went to her first schooling show, and she did quite well. The key, she told me, was spending at least one day per week working on the “basics”, even when things were going her way. When problems cropped up, she didn’t allow them to derail her progress, instead she took a step back and came at them from a foundation perspective. It was working, and the proof was in the progression.

The moral of this story is simple…sometimes we need to take a step back before we can take a step forward. Getting frustrated or irritated with a problem doesn’t solve anything, it actually makes things worse. Remembering the foundations of riding – the things that we learned when we were just starting out – and using those tools to build on what we have will only make us stronger riders. You can’t build a mansion without doing maintenance along the way; you can’t have a winning show horse or even a good trail mount without consistently reinforcing the things that made it a good riding horse in the first place.