If you have noticed a shamrock brand at events lately, it was on the shoulder of an Irish Oaks Ranch bred horse. Irish Oaks Ranch, a Western Performance Horse breeding facility owned by the Murphy family of Arroyo Grande, has been producing equine athletes for over 30 years. Katy, Tim, and their sons James and Michael have combined their talents to build a successful family farm. Katy previously taught at Cal Poly, San Luis Obispo in the Equine Science Department, and brings extensive knowledge and experience to the daily operation of their breeding program.  She is also an active member of the AQHA, APHA, and NRCHA. 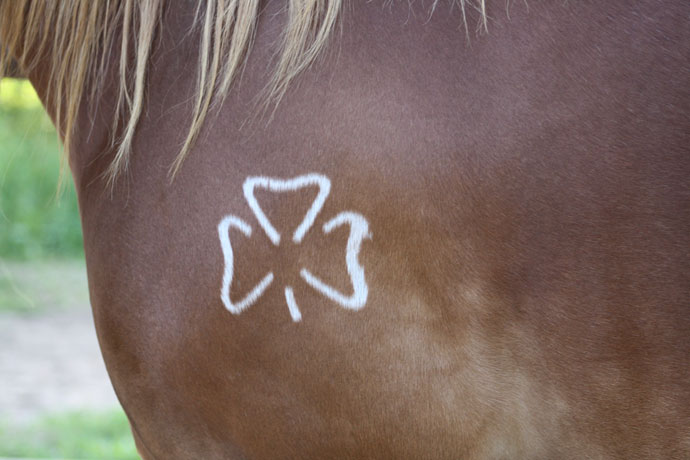 Katy’s breeding program originated with one mare and continues today, with four generations on the ranch. She chooses to breed her own home raised mares, a somewhat unique philosophy in the horse industry as many breeders will choose to purchase proven broodmares rather than breed and raise their own.  One of the advantages of this is that she knows her horses extremely well, which helps her to pair IOR sales prospects with their future riders.  The Irish Oaks Ranch broodmares carry western performance horse bloodlines such as The Nu Colonel, Smokums Prize, Smart Shiner, and Smokin Chic Olena.  These mares are then bred to the top AQHA and APHA stallions in the cow horse, cutting and reining industries in order to raise young performers that are versatile and able to succeed in any discipline.  Stallions such as Matt Dillon Dun It, Like A Diamond, Tomcat Chex, Gallo del Cielo, and Boonlight Dancer are now present in some of Katy’s top prospects.

The young horses are sent into training in their two year old year.  Once their foundation is solid, Katy and her son, James, decide which horses will be kept for the show pen and as future replacements for the broodmare band.  James has competed IOR horses in the amateur division at the NRCHA Snaffle Bit Futurity over the last few years, and plans to compete again this year in Reno with Kid Prize, a gelding by Smokums Prize out of Genuinely Nu.  Genuinely Nu, a NRCHA money earner and recipient of the NRCHA Superior Cow Horse Award, was trained and shown by Dave McAmis.

Prospects not kept by Irish Oaks Ranch are thoughtfully matched up with new homes and riders in order to create unique partnerships.  The horse and rider relationship is very important to Katy and she prides herself in finding the best home for each horse that leaves the ranch.  As there are several generations of horses on the ranch, Katy’s intimate knowledge of each prospect and their family helps her set each horse/rider combination up for success. The versatility of Katy’s program allows her horses to be winners as family, rope and ranch horses as well as in the arena, a tribute to the knowledge and care provided by the Murphy family.

The Home of Champions

2013 proved to be an exciting year for Irish Oaks Ranch.  Gennys Prize, (Smokums Prize x Genuinely Perfect), won the Non Pro Hackamore at the Snaffle Bit Futurity in Reno, Nevada.  Gennys Prize, owned and ridden by Shawn Renshaw, also won the NRCHA Derby Non Pro title earlier in the year.  Needless to say, the Renshaws and Murphys were thrilled with the wins.

Haley Aquino, another long time  supporter of IOR horses, has had a successful year in both the cow horse pen and the barrel racing arena with both Ivana Chex and Miss T Starlight.  Ivana Chex (Tomcat Chex x Ivana Diamond) was shown in the amateur division at the NRCHA Derby, while Haley and Miss T Starlight (Junior Starlight x Miss Spats 495) won the WPRA Year End for California Permit Holders 2013 running barrels.

An IOR-bred mare that has recently come full circle, Wanna Win A Prize, has just been confirmed in foal to Shine Chic Shine.  She is a NCRHA money earner ridden by Mike Lund to take the Limited Open Hackamore Championship at the 2008 NRCHA Derby.  Her coming foal, along with the 2014 breeding plan including stallions such as Smart Luck, Smart and Shiney, Smokums Prize and He’s Wright On will continue the legacy of winners for the Murphy family and Irish Oaks Ranch.

Written By
Amy Rice
More from Amy Rice
Are you stuck in the same arena riding routine? Perhaps a copy...
Read More