If you’ve been an equestrian for long enough, I’m sure that you’ve come across someone who believes that – at best – horse ownership is cruel, and – at worst – you’re an animal abuser for even suggesting that your horse do anything but live in a pasture and enjoy his freedom.  There are so many different camps these days – people who believe that they know what is best for horses in general, and if you do not adhere to what they believe you are perpetuating cruelty.  Maybe you keep your show horse in a box stall and someone tells you how horrible it is to keep your horse “locked up”, or maybe you body clip your horse before show season and someone has told you that what you are doing is unnatural and cruel – the remarks and judgement can be exhausting.

There is a difference between “activism” and simply overstepping one’s bounds, but in the horse world this seems to be difficult for most people to manage.  I know that I have personally been lambasted for making my mare wear that “awful curb bit” to show in, and I’ve also been told, by fellow horse owners, that keeping my mare in a stall is nothing short of cruelty.  When is it time to mind our own business and when is it time to take a stand?

Sharon Jantzen gives us a little insight into one of her own experiences in and excerpt from one of her “Carriage Capers”, where she came across a very vocal and volatile activist in San Luis Obispo.

“That’s How Wars Are Started”

As I climbed into the carriage to drive Shasta for another Farmer’s Market driving experience, the Thursday night before Thanksgiving week, Chad came running back over, “Oh you have a special ride to pick up tonight. You are to meet Andrew in front of Linnaea’s Café on Garden Street at 8:00. Here’s a sticky note to remind you.”

8:00 drew near so I turned Shasta around to travel up Marsh Street to Garden Street. We approached Linnaea’s Café and stopped just before the tables set out in front where the regular crowd gathers. Linnaea’s attracts a rather earthy, save-the-world, natural-food-eating, anti-war crowd. Shasta and I quietly wait for Andrew to approach us.

As we waited, a rather young, earthy guy with long hair was sitting on the curb in front of the Café. People were coming up to say Hi to Shasta and this young man began to let me know how he felt about the horse being so cruelly asked to work like he was. There was another guy and two girls sitting a few feet away on the curb. They all seemed to agree with the first guy’s comments.

The long-haired guy felt the horse should be running free on green pastures, he complained the asphalt was much too hard on his feet, and thought I was very selfish to have the horse out in the cold when I was so cozy in my jacket (yeah right, who really is the cold one?) among various other complaints. As this long-haired guy spoke I merely looked at him and smiled. I determined he was too far away to really dialog with and he wasn’t saying anything worth responding to anyway.

Aggravated with my no-response tactic the long-haired guy came walking up to the carriage. He was really skinny, with a bad complexion and harshness in his eyes. He boldly took a hold of the whip and said. “Do you use this on the poor horse?” I looked at him and smiled.

“Come on! Answer me, you do use it on him don’t you! It looks pretty well-used to me!” he taunted.

“No, I don’t,” I replied shaking my head (I don’t use it in the manner he was suggesting).

“Oh this poor innocent horse! You beat him!” he continued. I realized at this point the best response needed to be kept to a simple smile.

He wouldn’t give it up, “You know what I’m going to do? I’m going to tell everyone who comes up to this horse how cruel it is that you are out here! I’m going to tell them how bad this is on his feet and how mean you are to make him freeze, and how he should be out running free on a green rolling hill somewhere!” I looked him straight in the eye and smiled.

Yet he continued on, “I bet you feed this horse food filled with artificial ingredients! Look, this is what he should be eating!” He held up a bag of what looked like Lima beans with little shoots coming out. As he talked he walked over to Shasta’s head and began feeding him. I turned Shasta’s head away and looked at the guy disgustedly. Checking my watch, I wondered if Andrew was ever going to show . . .

Soon a tall, college-aged, put together man approached the carriage. “Oh,” I exclaimed with a big smile, “you must be Andrew!”

“Yes,” he replied while I breathed a sigh of relief, “My girlfriend is still in the store. Sorry I’m a bit late the line in there was awfully long.” The long-haired guy comes walking over to Andrew.

“Hey are you going on a ride?” he asked Andrew.

Sure enough, Andrew spun around mad and punched the long-haired guy in the stomach where he was holding a glass of creamed coffee. The glass splattered on the street as a full-on fist fight erupted. The long-haired guy and Andrew pushed, shoved and punched each other around. At one point Andrew was pinned against a car, then he pushed away and turned away to get his girlfriend. The guy and two girls sitting along the curb were telling the two to stop fighting, saying, “Hey, cool it. That’s how wars are started!”

Excerpt is from the full story found in the e-book, Carriage Capers – Magic Moments Leave Marks on our Hearts – Stories of a Horse Carriage Driver in San Luis Obispo County by Sharon J. Jantzen. Get this story and eight more Carriage Capers delivered to your in-box by clicking this link: Carriage Capers 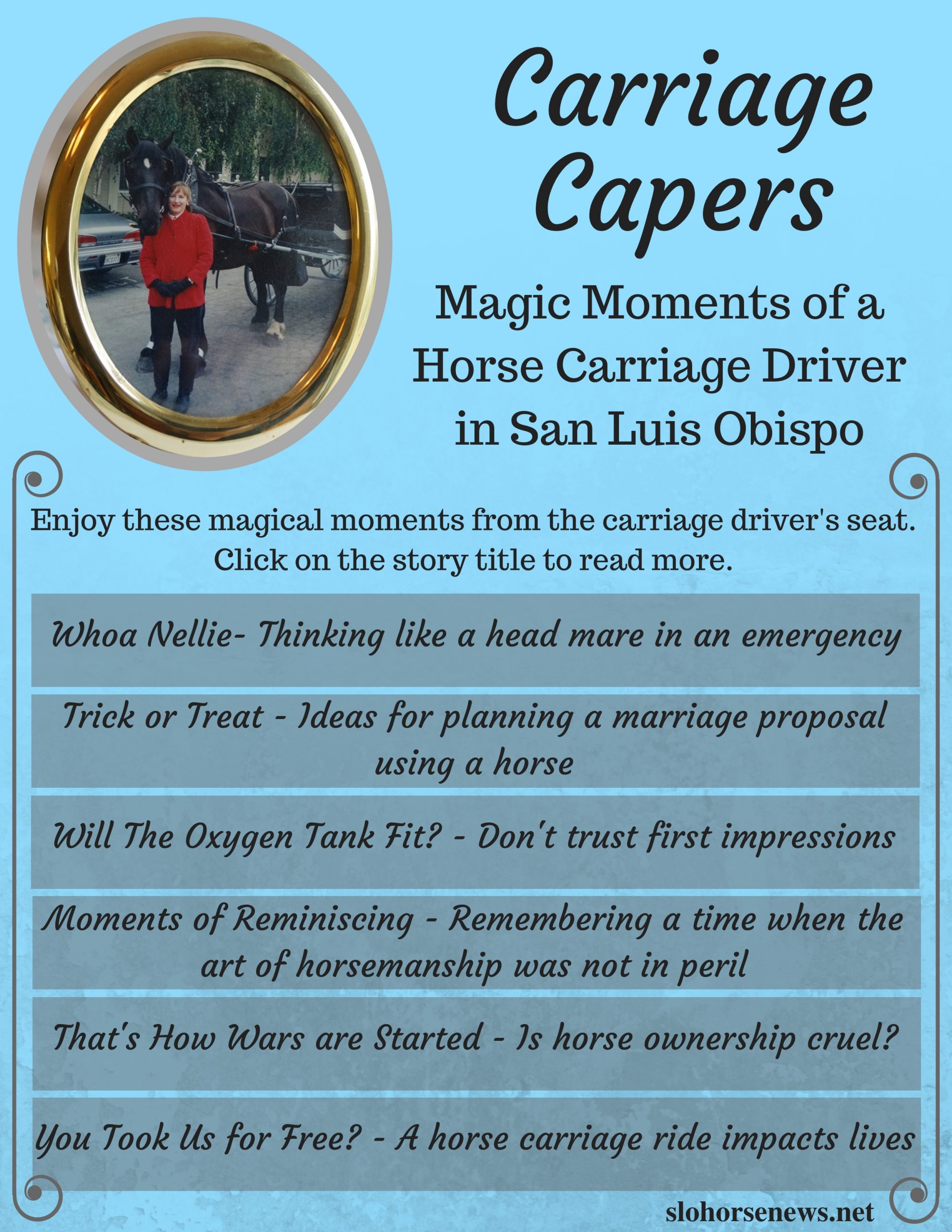 Written By
Sarah Williams
More from Sarah Williams
There are few other breeds that command attention like the mighty Shire....
Read More