When I began seriously riding at 10 years old, I was deeply embedded in the irons of a hunt seat saddle.  I loved all aspects of english riding, and it was only after falling in love with a horse that was better suited for western events that I decided to give something different a try.  Necessity really brought me to reining, because as my age advanced, in order to compete in Stock Seat Equitation I needed to be able to do a full reining pattern.  In this case, necessity was really destiny in disguise, because for the better part of two decades, though I have dabbled in just about everything from sidesaddle to dressage, my first love remains reining.

As a reining rider in SLO County, an area where dressage, hunter / jumper and trail riding seem to be the most common equestrian sports, I am always getting asked questions about the discipline that I have chosen.  I have found that most people simply don’t understand what reining truly is.  Of all the questions that I get asked, these are the five that seem to get repeated the most often. 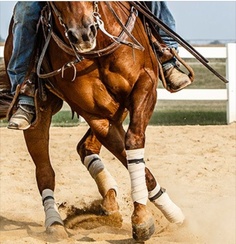 The simplest answer to this question would go something like:  Reining is an event where riders are asked to individually enter the arena and complete one of a set of standard patterns, which incorporate maneuvers ranging from sliding stops and spins, to flying lead changes and rollbacks, all atop a horse that is easily guided on a loose rein, strong hindquarters, and with no apparent resistance.  That’s the simple answer, but there really is so much more.  Stripped completely down, reining is an evolution of ranch or “cow” work, with an emphasis on precision.  Each maneuver can be traced back to something that a rider would do while working a cow or completing other tasks on a ranch or in the western riding tradition; the rollback, for instance, simulates chasing a bolting cow, coming to a quick stop and turning it back in the other direction.  In the past, where cowboys relied on their horses as “partners” to complete a long day’s work, horses needed to be quick, agile, responsive and , above all, a pleasure to ride.  So, reining is ultimately the combination of functional riding and precision style, which is why it is so often compared to the sport of dressage.

Is it true that only Quarter Horses make good reining horses?

I get asked this question quite a lot.  When most people think of a horse that is doing anything extremely athletic in the “western” world, they automatically imagine a Quarter Horse.  Indeed, the foundation Quarter Horse’s natural musculature and conformation is well designed for the more demanding maneuvers that reining is known for, most specifically the sliding stop and spin.  However, just like in the racing industry, Thoroughbreds are not the only horses who can excel on the track.  All of the “stock type” breeds, with strong conformation and adequate athleticism, have the potential to be competitive in the reining pen.  Throughout the years, I have seen Appaloosa’s, Morgans, Paint Horses, Spanish Barbs, Andalusians, Mustangs, Arabians, Thoroughbreds, and even Mules compete quite spectacularly.  In fact, the first finished reining horse that I ever rode was a Morgan stallion, whose accolades included several National Championships in breed and open competition; To this day I have not ridden a longer, smoother slide.

Once a horse is trained to slide or spin, all you have to do is sit there, right?

“The rider must give the proper cues and stay in a relatively correct position in order for things to go the right way.”

I don’t think I am alone in wishing that the answer to this question was yes, but, as with just about any equestrian sport, it truly comes down to a combination of horse and rider.  In defense of the people who have asked me this question (many accomplished riders in other disciplines), it is true that some horses are better at carrying a “green” rider than others; Much like the idea of the “school master” in the dressage world, a good “finished reiner” can make an inexperienced rider look better than he/she may truly be…But the rider still has to pilot the horse through a pattern, give proper cues and, most importantly, not get in the horse’s way.  An inexperienced rider can easily, for instance, throw a finished horse off balance during a set of spins by not staying centered in the saddle, causing the horse to lose his pivot foot, “swap ends”, or even to fall out of the maneuver all together.  During a sliding stop, a rider that does not know how to properly sit or is too quick to pull on the reins, can cause even a finished reining horse to brace in the front end, resulting in a sliding stop where the horse is not moving “freely” and “without resistance”.  So, even if the horse knows his job, the rider must give the proper cues and stay in a relatively correct position in order for things to go the right way, as is the case with most disciplines.

Reining isn’t as hard as dressage, is it?

“Dressage and reining are both sports that require precision, athleticism and have a high degree of difficulty”

Obviously, there are those on both sides of this very old fence, and it is nice to see that the fence is getting shorter with the creation of cross-over sports like “Cowboy Dressage”.  When I inevitably get asked this question, my answer usually goes something like this:  Dressage and reining are both sports that require precision, athleticism, and have a high degree of difficulty.  There are indeed many similarities; both disciplines are judged in a similar fashion, both require the rider to remember and properly execute a pattern, both require horses and riders to master a certain set of maneuvers, like dressage tests, reining patterns range from “easy” to “difficult” and usually riders are asked to perform a pattern relative to their experience level, etc.  There are also many differences, ranging from the fact that in reining riders are required to ride with one hand and a loose rein (except when showing a young horse still in a snaffle), to reining patterns being more “fast paced” than dressage tests.  Some of the maneuvers are the same or similar, like the flying lead change, and others are completely unique to each sport, like the sliding stop and spin vs. the piaffe and the passage.  All in all, to say that one is more difficult than the other would be doing a disservice to both disciplines. 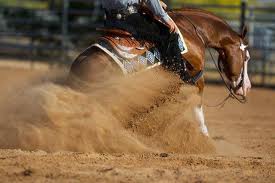 I often get asked why I have chosen to devote my time to reining, and I could easily fill several pages with my answer, but in the interest of being brief, I will say that I am probably most fond of the challenge.  I have tried more disciplines than can be counted on two hands, and in the end, I chose the thing that was most difficult for me as a rider.  The fact that I can ride five days per week and still find little things to work on, keeps me looking forward to my time in the saddle.  Reining is not easy; It is not something that can be learned in a weekend, but it is something that can be practiced and enjoyed for the long term.

The NRHA is a wonderful organization that allows for fun and rewarding competition in all age groups and experience levels.  With the wide variety and sheer number of shows and events, reining is something that just about anyone can enjoy.  For me, the Arabian Horse Association, in concert with the various regional clubs and associations, is a great supporter of the sport, and classes are offered at nearly every show that I would want to attend.  In the end, though, it comes down to personal preference and simply finding your “niche” in the equestrian world…if you are looking for yours, I would suggest you give reining a shot.

Written By
Sarah Williams
More from Sarah Williams
It’s almost as though we’ve personified our horses, believing them to be...
Read More