SLOCQHA was started by Cal Poly equine instructor, Bill Gibford around 1967-68, who owned and campaigned Zan Par Bar in halter as a 2-year old before Carol Rose purchased him. Bill was also on the Paso Robles Fair Board when Maynard Potter became manager of the fair. Cal Poly Equine instructor, Bob Hadley was also involved in the start-up of SLOCQHA (who bred Jean Tivio to Doc Bar, with the resulting foal, Professors Alibi), along with local physician, Chalmer Ferris, whose wife showed horses. 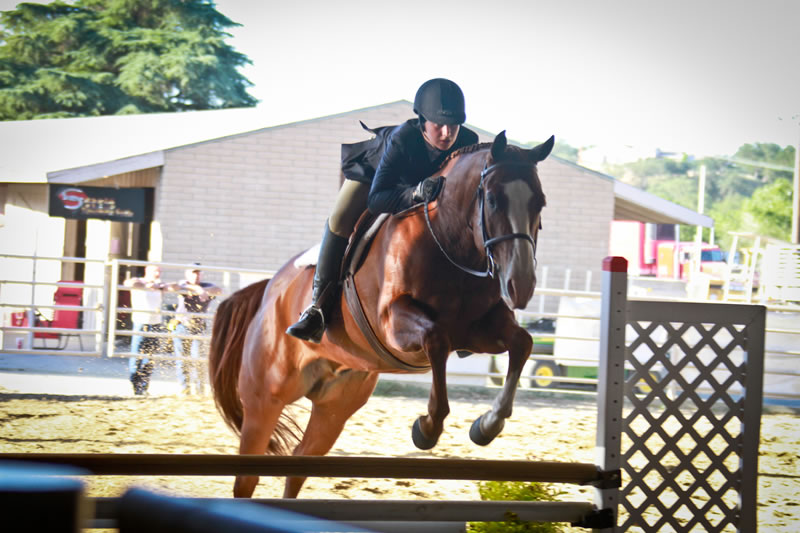 The only place to showcase Quarter Horses in the 1960’s was the Paso Robles Fair, a one-day horse show with halter classes for “registered Quarter Horses”.

During this time, Cutting was a big sport on the Central Coast, so eventually Cutting was added, along with Weanling Futurities to showcase local breeders foals.  As the horse show evolved and became larger, SLOCQHA members in 1978-80’s applied to AQHA to have a one-day stand alone event to be held yearly on Mother’s Day weekend. AQHA member Bill Enk, remembers showing in the rodeo arena, where the bucking chutes and roping chutes were just something you dealt with, as it was the only large arena at the fairgrounds at the time. Sometimes the race track was used if classes were big.

During the mid 1990’s, the Paso Robles newspaper reported that “the show had grown to 2 days with 130 Quarter Horses and 400 participants, many who were from out of town”. That was a lot of horses for the fledgling show! With traditional classes showcasing “California Trail Horses” (many from Cynthia Cantleberry’s and Patty Knudsen’s barns) , Pleasure, Reining and Cattle classes on the rise, the Mother’s Day Circuit  continued to grow. Demands for more disciplines (English, Youth and Amateur) allowed the Mother’s Day Circuit to grown into a 3-day event.

In those early years, the fairgrounds in Paso Robles (then called the Paso Robles Fairgrounds) was a bit rough. They were no covered arenas or permanent stalls. Much has changed since then, with two covered arenas, hundreds of beautiful permanent matted stalls, plus the SLOCQHA Mother’s Day Circuit, which has evolved into one of the largest Quarter Horse Shows in California. With upgrades to the Event Center, the popularity of the show has grown each year. Bill Enk, SLOCQHA show manager calls the Mother’s Day Circuit a “real success story”, thanks to all the loyal SLOCQHA volunteers throughout the years!

Today, with high demand for Ranch, Cattle and Jumping classes, the show is a 4 day split combined event, with an extra day for a Trail Special Event. The show has grown so large that Cutting classes and Reining practice runs on Wednesday. The 2015 SLOCQHA Mother’s Day Circuit starts on May 6 and continues through May 10.

Now in its 48th year, the San Luis Obispo County Quarter Horse Association Mother’s Day Circuit features a full slate of classes in two arenas. There are performance classes (including Cutting, Reined Cowhorse and Reining) rail classes for Western and English riders, plus Trail, Speed and Jumping events that attract some of the best horses on the West coast. The classes on Wednesday, May 6 are for Trail horses (a Trail Special Event) and Cutting classes. Thursday through Sunday the show features “split combined” classes, or two complete AQHA shows with four judges. This circuit is always held over Mother’s Day weekend and celebrates horse loving moms throughout our area. There is a free “Mother’s Western Pleasure Class” on Sunday afternoon that is open to all mother’s riding in the class and each “mom” takes home a free bottle of Paso Robles wine.

The show is approved by AQHA, PCQHA, SLOCQHA, plus the show is an AQHA Youth Qualifier, as well as Novice Championship Show Qualifier and Western States Championship Show Qualifier. Last year’s entries topped 2,200 horses and riders and impacted Paso Robles with exhibitors, trainers, spectators and vendors bringing more than $80,000 to the community through shopping, wine tasting, hotels, restaurants, gas, etc. A variety of vendors from all parts of the Western United States will attend showcasing unique western shopping.  Classes start at 8am daily and admission is free. For details or a full premium for the SLOCQHA Mothers Day circuit or the Trail Special event, go to www.MothersDayCircuit.com .

In addition to the show in May, SLOCQHA also offers the Open 3-Show Buckle Series. These open horse shows welcome horses and riders from all breeds and disciplines, with classes for English, Western, Leadline, Walk-trot, Jumping, Trail, Ranch Horse and Speed classes.  Beautiful, year-end silver buckles are awarded each year to Champions and Reserve Champions.  This past year, over 70 horses competed at our final show in October. This was one of the largest open shows we have ever held. Additional classes and awards have been added for 2015, so this year’s shows look to be even stronger. The Open Show Series shows are held at the lovely Pat Mar Ranch in Templeton, CA. Dates for the 3 show series are June 28, August 23 and October 25.

For details on the Open Horse Show Buckle Series, the AQHA Mothers Day circuit or the Trail Special event, go to www.SLOCQHA.com.

Written By
Guest Author
More from Guest Author
“Understandably, one of the most common questions we hear is, ‘When is...
Read More