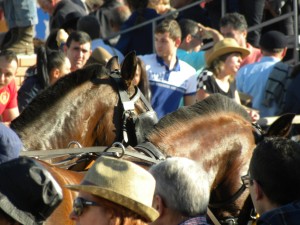 Tradition and history join hands with progress and development as the usually quiet, medieval town of Golegã, Portugal comes to life for the Feira de Golegã National Horse Show the largest and most important horse fair in the country. Golegã grew in fame as large farms developed, and horse breeders settled there when it was elevated to the level of “town” by decree of D. João III, King of Portugal, on November 3, 1534. Feira de Golegã began in the mid-eighteenth century, and remains the gathering place for breeders, riders and spectators of the Lusitano horse.

Competitions became an important part of the show in the late-eighteenth century. People and horses have always mingled together in Golegã, and today cars share the narrow cobblestone streets with those who still feel like horse power has four legs. For ten days during the Fair the town is bustling with vendors, riders, carriages and spectators. The clip-clop of hooves on cobblestone streets rings throughout the village. Horses are kept in box stalls under homes that line the streets. Influential families, breeders, riders and others gather at the Feira de Golegã each year just as they have done for centuries. This year it was held November 6-15, 2015, and I was gifted the once-in-a-lifetime chance to peer into this incredible window to another time as a guest of my mom, Charlene O’Neil.

10 days of Activities in 5 days 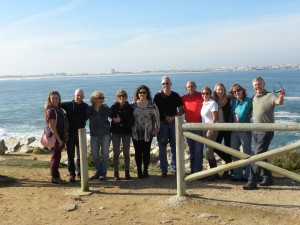 This year, eight of us from across the pond tasted a little bit of history, as we experienced a time when horses were an intricate and central part of Golegã village life – though we kept a foot in the here-and-now as we made way for vehicles on the outskirt streets. Two and half days of our incredible journey were spent at the Golegã National Horse Show.

We were guests of Portuguese riding brothers Carlos and Nuno, who kept us moving, laughing and out late the entire time. This pair grew up riding with the influential Lusitano breeder families of Golegã, and participated in the Fair as children. Each brother traveled with a portion of our group from the states, where they now reside, one on the East Coast and one from our West Coast.

Their sister, Fatima, and her husband, “Tó”, were our Portugal activity directors; always keeping us happy, comfortable and well fed. We were introduced to Lusitano horses, and a few of the top breeders, enjoyed the fair, explored castles, toured wineries, and experienced “typical” Portuguese food in wonderful four course meals in amazing settings twice daily. We wanted for nothing during our stay where we squeezed ten days worth of activity into five days.

The river of horses flowing on the “manga” or track that circles the central arena, which is the heart of the village, never stops. Around and around they go; it’s a constant bobbing of heads, as riders keep time at the trot and canter, even the Passage and Piaff as though they are everyday maneuvers. All the riders are dressed in traditional Portuguese riding attire consisting of flat topped hats, ruffled shirts or blouses, bolero and matching pants for the men, and a bolero and wide legged pant for the women. Carts, buggies and carriages – singles, pairs, three-in-hand and four-in-hand – riders of all ages and styles (a large majority being men) all flow together.

The steady stream of equestrian traffic on the track ebbs and flows like the tides as day turns to night and night becomes morning. Pedestrian crossings across the track from the central arena into the crowd takes timing and courage, as the volume of horses grows and flows in a steady stream. The scene and the experience seems chaotic to outsiders, and yet everything moves without missing a beat. Once, there was a bobble in the flow from a loose horse on the track, and the entrances were quickly closed by people in the crowd, the horse was gathered by another rider in the stream, and the scene quickly returned to “normal”.

Encircling the track is a cobblestone passageway, upon which the perimeter stages private covered patios – each owned or rented by the Breeders. These patios are like box seats for the main arena. As day turns to evening, riders dressed in traditional attire gather out front and share drinks with the occupants. A line of mounted riders forms outside the main window of the patios, sometimes over 20 horses abreast. Braided and bobbed tails swish in the faces of the pedestrians meandering by.

Hooves stamp on the cobblestones as the riders ask for a Piaff to liven the mood. Jingle bells on throat latches ring through the air casting their music to our ears. Smoke from chestnuts roasting over coals, billows past and creates a pub-like atmosphere. Music rises from discotheques and the private patios. The evening entertainment draws a large – mostly standing room only- crowd. The fair continues as the sun rises, and from a spectator’s point of view, it’s nothing but horses and people, leather, wool, chestnuts roasting, boot-clad onlookers, hoof-beats on cobblestone…and the entire experience is almost overwhelming. A constant parade of horses and ponies pulling carts, carriages and buggies, riders with dancing horses in traditional attire – men, woman, boys and girls – all gather to proudly show off the Lusitano horse.

This is the Feira de Golegã, where tradition joins hands with progress, and balance is found in beautiful chaos. Where twelve people who began as acquaintances, or even strangers, cemented the bonds of friendship over a shared love of horses. We laughed, told stories, broke bread, and marveled at the beauty and history of not only Golegã, but surrounding sites like Fátima, a Medieval Castle in Óbidos, and the Pena Castle in Sintra. We quickly formed bonds and created new memories that will last a lifetime. We were strangers no longer when we parted ways after just five days in Portugal. Vamanosh! Let’s Go! 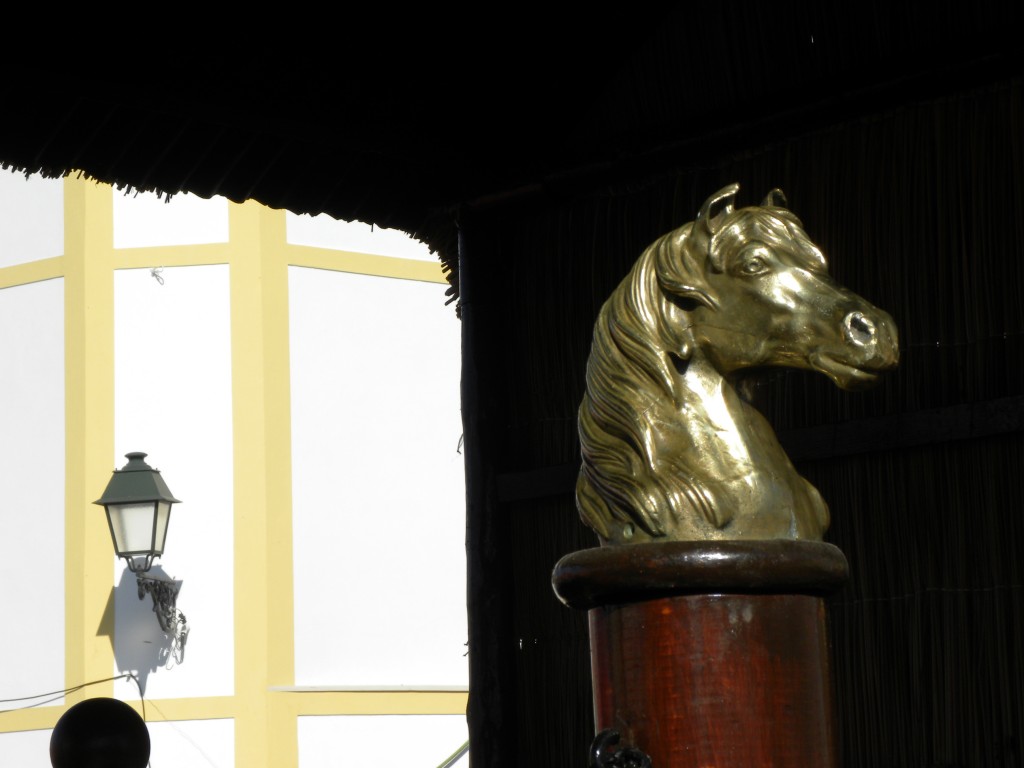 All other photos unless noted: Sharon Jantzen