If you’ve been reading along with some of my posts here at SLOHN, you’ve probably figured out that I like to hear about the horse show world from the perspective of the Non-Pro since I find it a relatable topic for most of us… and to confess – I live somewhat vicariously through people who seem to be a little braver than myself! What it takes to find the right horse, compete, take losing in stride and to ride the wave of victory when it happens all while having a “day job” and limited hours in the saddle is no easy task. Here we find out what Dr. Greenberg’s recipe for success is – no surprise, a lot of hard work plays a significant role!

Marissa Greenberg, DVM practices small animal veterinary medicine at Animal Care Clinic in San Luis Obispo since her graduation from Washington State in 2006, but her large animal aspirations go all the way back to her Cal Poly days where she earned her Animal Science undergraduate degree. In 2000, she took part in the Quarter Horse Enterprise with Mike Lund and Gene Armstrong and found the cow horse bug to be addicting. Riding with top trainers in the business and seeing first-hand the work that goes into getting a horse ready for sale or to compete was an eye opening experience that stayed with Dr. Greenberg. Last year she set out to find herself a new 4-year-old gelding to show and ended up with a 3-year-old mare that took her to two NRCHA Non-Pro Limited Futurity Reserve Championships. Here we find out how the importance of preventative medicine, finding the right horse and learning from people around you, effected Dr. Greenberg’s stellar year. 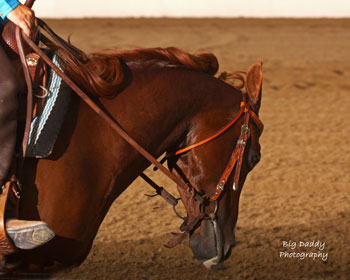 From Small Animal to Large Animal
There’s an old adage that an “ounce of prevention is worth a pound of cure” and is a statement Dr. Greenberg agrees with as a veterinarian and as a competitor. “I definitely have a focus and a goal to provide top quality medical care for my horses, and to do everything possible to keep them sound for as long as possible. I have the knowledge of all the things that can go wrong, so I am big on as much preventive medicine as possible.” In addition to being in tune with her animals’ health, she feels that a career in veterinary medicine also lends a certain skill set of grace under fire to her showing. Dealing with life or death situations on a regular basis and being able to make the right decision quickly, make reading a cow in the herd just slightly less intimidating when you put it all in perspective!

Out of the Blue Clear Sky
“Out of the blue clear sky” – not just the lyrics to one of my favorite George Strait songs of all time, but often the phrase that comes to mind when people seem to find the perfect item they didn’t know they were looking for. Last year, Dr. Greenberg was ready to move on as a competitor from her older show gelding and went about shopping for a 4-year-old gelding to continue her cow horse education. Her perfect horse ended up being right under her nose at Justin Wright’s training barn – except “he” was a “she”! Looked over by others due to her size and being a little behind in her training, Dr. Greenberg wasn’t quite sure, but, Justin and her friend, Korie Baker, were sure the little mare, aptly named “Minnie”, had what it took to “Wow” in the show pen. “Korie stood there telling me “Just buy her!!” and so I decided to trust her.” And it’s a good thing she did. Trainer Justin Wright was adamant about Dr. Greenberg spending time riding, schooling and showing her own horse, which made the connection between Dr. Greenberg and Minnie solidify, learn to trust each other and gave them the confidence to go show. To sum it up in her own words Dr. Greenberg says “I truly feel so appreciative of the opportunities I’ve been given on Minnie. To show a horse like her, and to have had the success I had at Paso and especially at Reno, was really a dream come true. I couldn’t have asked for a better first futurity horse or futurity experiences, and it’s so satisfying to have had years of hard work pay off.”

I couldn’t have asked for a better first futurity horse or futurity experiences, and it’s so satisfying to have had years of hard work pay off.

Goal Setting
For anyone pursuing a new project, or going full-speed ahead on an ongoing project, we know that goal setting is key. For Dr. Greenberg, her initial goals were not to show Minnie this year, but to get comfortable on her new horse and plan for next years derbies. Minnie had other plans apparently, because she soon started to blossom as a tough little cow horse and the idea for entering the Pre-Futurity in Paso came to mind. Having that goal seemed to only make Dr. Greenberg and Minnie even better and once she earned her Non-Pro Limited Futurity Reserve title in Paso and recouped her entry fee, she was Reno or bust! 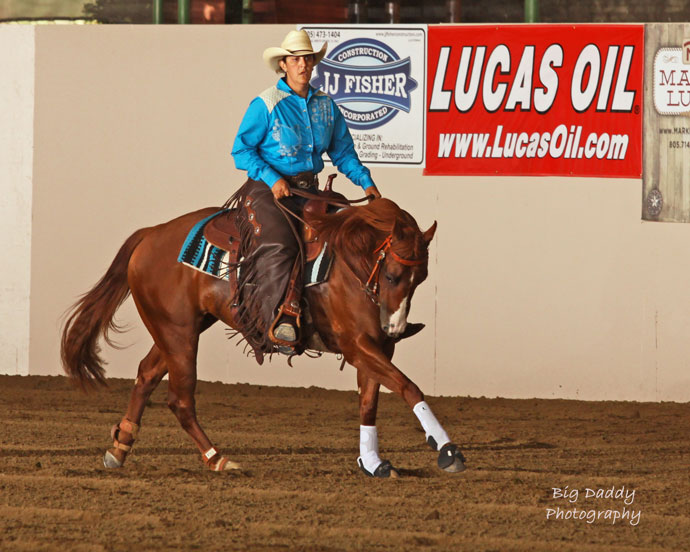 The People in your Corner
So you’ve got the training, you’ve got the right horse and you’ve got your eyes on the prize…what’s left? I think anyone in a winner’s circle will tell you that they didn’t get there on their own. Granted, you and your horse are the only ones riding into the show pen, but sometimes we need a little encouragement from the people around us to step into that arena with confidence. Dr. Greenberg has been working towards her NRCHA goals for many years so she’s got a long list of people that helped put her in the top of her class. Jason Schaper, a cutting horse trainer, helped keep Dr. Greenberg sharp in the herd work while she attended vet school in Washington. Mike Lund and Gene Armstrong “gave me the best foundation for any horse event I could have asked for” and the late Jeff Walker was instrumental when she decided to venture down the cow horse track. Recently, trainers such as Mark Luis, Will Pennebaker, and Tina Robinson have helped Dr. Greenberg and through this network of cow horse family members, she met her current trainer Justin Wright and his assistant Russell Probert. Her husband, Ramon, and her father, Paul, round out her crew. “Ramon supports all the time I spend dedicated to horses and the time away from home to show, he held down the fort while I was in Reno. He comes to watch and loves to be part of celebrating my success”. Her dad is, of course, proud and still excited to see his daughter show. “My dad is one of my closest supporters and fans. I was very excited to have him watch the reining in Paso, and he watched all of the webcast of my runs in Reno.” Its no wonder her dad is proud, since Dr. Greenberg’s earliest riding memories are with her father before she could even walk. From trainers, to family to friends and co-workers sending texts and email of cheers and good luck, Dr. Greenberg considered herself extremely lucky to have such a great support system.

What’s Next?
Minnie is getting a little R&R at Central Coast Boarding and Training in SLO, which means a few relaxing trail rides for Dr. Greenberg before they start thinking about next year. “My goal is the derbies the next two years, and I really want to show her at least a couple of times in the hackamore-it’s something I’ve always admired and really want to learn more about. At this point, my hope is to have her into the future as my bridle horse, but we’ll take it one show at a time for now!”

At this point, my hope is to have her into the future as my bridle horse, but we’ll take it one show at a time for now!